Gravois Park Is Getting a New Playground, Thanks to 200+ Volunteers 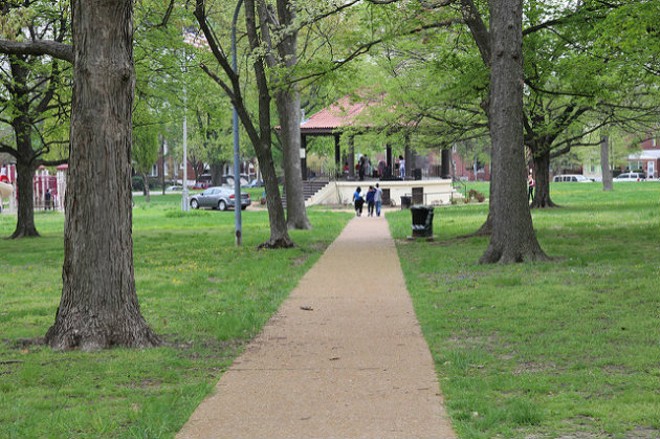 Gravois Park will soon receive an upgrade — one made especially for the kids of the south city neighborhood.

This Thursday, June 1, more than 200 volunteers from New Balance, Cherokee Street Development League and KaBOOM!, a national nonprofit aimed at creating spaces for and promoting play for ideal child development, will come together to build a brand-new playground. It's set for Gravois Park, located at 3200 Potomac Street.

The park's playground, which was noticeably worn, broken and rusted in numerous parts, was torn down in the past month and will be replaced with the new one. Anne McCullough, executive director of the Cherokee Street Development League, says that the new playground will benefit the more than 1,400 kids of Gravois Park, Dutchtown and Benton Park West who live within walking distance of the playground, according to census data.

"Gravois Park is an underutilized, beautiful playground, and it's the oldest park in St. Louis, which is really interesting. And the playground itself is twenty years old, so it needed a new playground," McCullough says. "And so we applied for this grant through the nonprofit Cherokee Street Development League, which is a nonprofit that focuses on supporting and building up the creative and the social development of not just Cherokee Street, but the surrounding neighborhood."

The playground's construction is part of the fourth annual NB Global Volunteer Week, in which more than 6,000 associates with the athletic brand create service projects to encourage "the next generation's passion for movement and the pursuit of lifelong health, well-being and success," according to a press release. This will only be the second playground built in partnership between the New Balance Foundation and KaBOOM!, although the nonprofit has by itself contributed to the building, opening or improving more than 16,700 playgrounds.

Those looking to volunteer should arrive at 8 a.m. Thursday and sign up at the registration table by the pavilion. Breakfast will be provided.

A kickoff ceremony is scheduled from 8:30 to 9 a.m., while the final construction phase is estimated to take place from 1 to 2:30 p.m. A ribbon cutting ceremony is planned approximately from 2:30 to 3 p.m.