Pride St. Louis Will Have Something New in 2017: an Entry Fee 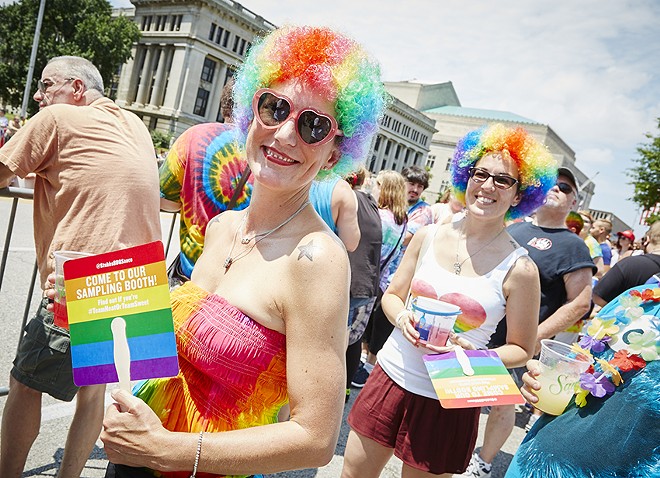 On the day after we published this story, Pride St. Louis issued a press release saying they'd heard from the community and would be rescinding the fee.

According to the statement, "After a long and productive discussion this past Monday with concerned community members, including representatives of the Metro Trans Umbrella Group (MTUG), Queer and Trans People of Color (QTPOC), and others, it was decided that PrideFest will remain free. As in past years, we will operate based off of a suggested donation." The price of alcohol wristbands will now increase $2 instead.

For the first time ever, Pride St. Louis will charge admission for this year’s event. While the $5 fee for “Community Proud,” scheduled for June 23-25 in Soldiers Memorial Park, is comparatively low, it’s not nothing.

Landon Brownfield, secretary of the board of directors for the nonprofit that hosts the event, notes that the organization just opened a community center, PrideCenter, which includes a computer lab and specialized lending library, as well as meeting and event space. Brownfield also mentions the scholarships ($21,000 in total, going to eighteen young people this year) and community outreach the group undertakes.

“It was really a decision to increase our community resources,” Brownfield says.

Across the country, KC PrideFest in Kansas City will charge $10 a day for their festival, June 2-4, with a free hour on Sunday. Chicago Pride, June 25, and San Francisco Pride, June 24-25, remain free but request donations. Pittsburgh Pride is free, but the event with headliner Jennifer Hudson is ticketed, with admission from $45 to $150.

“Our $5 in comparison is a pretty low admission overall,” says Brownfield. The admission is per-day, and it’s still free to attend the parade.

In its most recent set of publicly available tax returns, which cover 2014, Pride St. Louis showed $293,899 in revenue from that year’s Pride event. But even higher expenses left the organization running a slight deficit. At $7,054, its cash on hand was less than its liabilities.

Even so, on social media and in Boom Magazine, the fee has been sharply criticized. In “Opinion: Is 'Community Proud' Doing Our Community Wrong?” Lady Ashley Gregory called it “the most capitalistic pride we have had thus far.” Gregory is lead organizer of QTPOC:STL, a group for queer and trans people of color, and a board member of MTUG, Metro Trans Umbrella Group.

“To those of you, family, who say it’s just five dollars, I dare you to stop and check your privilege and think less about what you do have and more about what others may not,” she wrote.

Comments on her piece and other op-eds in Boom, as well as social media, echoed her concerns that the fee will exclude poor and working-class LGBT people from attending. “There is some pushback because Pride has always been free,” Brownfield says – as well as a citywide culture of getting things, like museum and zoo admission, for free. “Our goal is always to serve everyone, regardless of gender, race, ethnicity or socio-economic status.”

To that end, Brownfield says Pride is providing an unlimited number of free tickets to any organization that requests them, so that anyone who can’t afford $5 can still attend. Any organization can email [email protected] for tickets to be distributed.

Indeed, Gregory’s organization is among those distributing tickets. The need to provide them, she writes, should have been a clue that the fee was a bad idea.