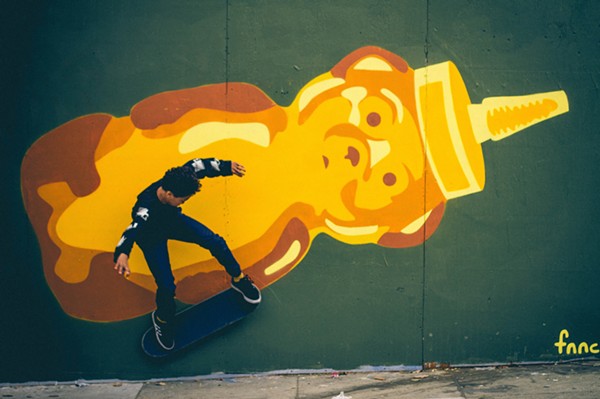 A two-day free festival will bring some top street artists together in St. Louis — and create large-scale works both north and south of Delmar.

The first-ever St.ART Street Art Festival will take place over the final weekend in September, commissioning artists, both local and national, to create pieces that invoke themes of truth and hope. The goal: to inspire a dialogue that bridges the city's deep racial and socioeconomic divide.

At the time of Michael Brown's shooting in August 2014, Tompkins was a fairly new resident to St. Louis, having recently moved to south city. After the incident, he couldn't help but notice the way his new neighbors used graffiti and street art to depict their frustrations.

Coming from New York and Tucson, he'd been largely unaware of the issues in cities like St. Louis. Living here has helped him see the divide.

“I saw the messages of frustrations, and thought, ‘How could we turn frustration into hope?’” Tompkins said. He decided art, specifically large-scale art that has grand emotion, would be the way to go.

Tompkins met prominent street artist Peat “Eyez” Wollaeger, who made him aware of similar projects like Paint for Peace, where artists gathered to paint inspiring messages on the boards that covered broken windows of buildings in the aftermath of protests in Ferguson. Tompkins figured artists might be interested in a Ferguson-inspired project.

Seizing the idea, he reached out to local and national artists to help make his vision come true. Artists involved with the fledgling festival now include fnnch, Wollaeger, Basil Kincaid, Cbabi Bayoc, Gecko the Mad Scientist and Kidlew. Spoken word poets who will be present include Pacia Anderson and Richard Blanco, who read at Barack Obama’s second inauguration.

“We’ve got all of these different mediums that will all come together,” Tompkins says.

The festival will consist of two days with two different themes. The artists will gather in Fairgrounds Park in north city on September 30 to work on pieces with the theme of truth. That may not always be easy to hear: The artists will depict the hardships that face the neighborhoods of St. Louis, and the primary colors used will be black and white. Once those works are done, they'll go to Langenberg Field in Forest Park to prepare for day two. On October 1, each artist will work on a different piece with an altogether different theme. This time, they will be creating pieces that depict hope, using colors to showcase their vision for the community. The two pieces from each artist will then be displayed side-by-side. Also featured at the festival will be spoken word poetry and performance art. On October 2, an after-party will be held sponsored by American Spa Magazine at Randall Gallery from 6 p.m. to 10 p.m., a place that Tompkins says will be big enough to hang the large-scale pieces. After the festival, Tompkins plans to auction off the works to companies that find its message resonates. The proceeds will go to programs that help inner cities and public service sectors.

Most of the funding for the festival comes from outside St. Louis. The first person to donate wrote a check for $100,000, Tompkins says. He turned to online funding sites to raise some money as well.

If you look at Tompkins’ bio, an interest in art may not be the first thing that strikes you. He has held senior executive positions for resorts and spas, and he still works in the hospitality industry to this day. But he says he's implemented art programs for guests through his executive roles.

“My success in my career and what I’ve been blessed with is creating programming that changes people’s lives,” Tompkins says.

Everyone is welcome to come to the festival on both days, from 10 a.m. to 8 p.m., to watch the artists work on their pieces. For more information on the festival, visit St.ART’s website.