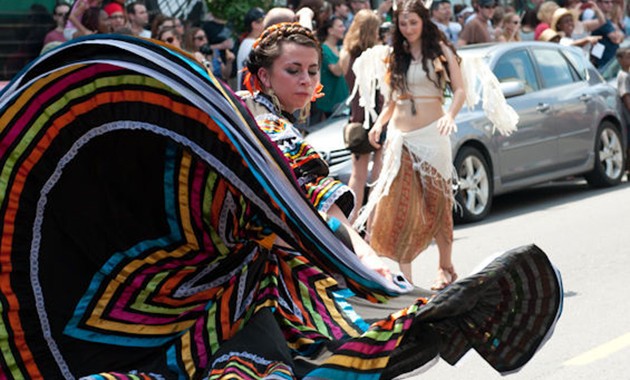 From a grand Cinco de Mayo party on Cherokee Street to a huge beer festival in Forest Park and a celebration of print-making at UMSL, this weekend's got it all going on. Bonus: That damn rain is expected to stop, finally. So unless you're walled in by floodwaters (a very real possibility), you have zero excuse.

1. Drink up in Forest Park
The St. Louis Microfest is back for a macro-sized celebration of beer, live music and food. Participants will sample national and local craft beers over two days in three different sessions. More than 60 breweries take part, among them Schlafly, Mark Twain Brewing Co., Six Mile Bridge and Boulevard Brewing Company. Food options including Bogart's Smoke House, the Dam and Mission Taco Joint will be there to satisfy your needs. And what would a festival be without music? Boogie Chyld, the Bottoms Up Blues Gang, Tommy Halloran's Guerrilla Swing, Ahna Schoenhoff, and Jon Bonham and Friends have all signed on to play. Profits go to Lift for Life Gym, the non-profit gym that gives under-served youth a place to strengthen their bodies and minds. St. Louis Microfest takes place in the lower Muny parking lot in Forest Park (www.stlmicrofest.org). Session one runs from 6 to 10 p.m. Friday, May 5. The second and third sessions are on Saturday, May 6, and last from 1 to 5 p.m. and again from 6 to 10 p.m. Tickets are $42 to $77, and include a commemorative tasting glass and access to the Demo Tent. Designated drivers get in for free. —Bill Loellke

2. See a classic comedy at Wash U
Harry Brock is a junk dealer on a mission. He heads to Washington, D.C., to bribe a politician to change some laws for the benefit of his favorite junkman — himself. His showgirl mistress Billie tags along, so Harry decides to get her an education while he's finding his stooge. Journalist Paul is hired to do the teaching, which yields unexpected results: The more Billie learns, the more she realizes Harry is a scumbag and a criminal. Garson Kanin's comedy Born Yesterday was the big hit of 1946. Clayton Community Theatre presents the show at 8 p.m. Thursday through Saturday and at 2 p.m. Sunday (May 4 to 14 at the Washington University South Campus Theatre (6501 Clayton Road; www.placeseveryone.org). Tickets are $15 to 20. —Paul Friswold

3. Eye some beautiful papyrus at the St. Louis Print Fair
Do you love everything paper-related? Then the University of Missouri-St. Louis has the event for you. The St. Louis Fine Print, Rare Book & Paper Arts Fair features 30 rare book and fine print dealers presenting a wide variety of materials to curious collectors. This year's treasures include original watercolors and historic photographs, as well as fine art prints and illustrated books. The St. Louis Fine Print Fair opens with a special preview party and silent auction from 6 to 9 p.m. Friday, May 5. Regular hours are from 10 a.m. to 5 p.m. Saturday and 11 a.m. to 4 p.m. Sunday, May 6 and 7, at the J. C. Penney Building on UMSL's campus (1 University Drive at Natural Bridge Road; www.umsl.edu). Tickets are $5 to $40. —Bill Loellke

4. Get Wagnerian at Powell Hall
The Flying Dutchman rises from the depths of the sea to invade Powell Hall. Not literally, but musically. Richard Wagner's opera closes out the St. Louis Symphony Orchestra's current season. It's a melodic tale of the Dutchman, a sailor condemned to an eternity of ghostly wandering for the sin of blasphemy. Every seven years he's allowed to visit land for a short time; if he can find true love during his respite, he'll be freed from his curse. Fate throws into his path a ship bearing Senta, a woman fascinated by the legend of the Dutchman. The tale is a passionate one, with music as grand and vast as the sea itself. Bass-baritone Alan Held and soprano Marjorie Owens play the leads, and visual artist S. Katy Tucker provides the innovative lighting that fleshes out the story. The Flying Dutchman is performed at 8 p.m. Thursday and Saturday (May 4 and 6) at Powell Hall (718 North Grand Boulevard; www.slso.org). Tickets are $25 to $111. —Bill Loellke 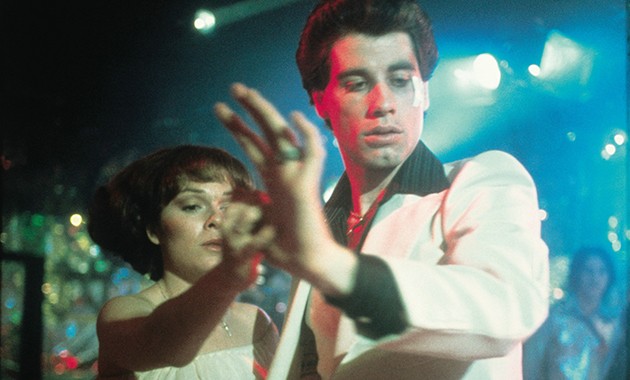 5. Join the fiesta on Cinco de Mayo
There are festivals, and then there is Cherokee Street's Cinco de Mayo. Far more a celebration of the neighborhood than a commemoration of Mexico's long-ago victory over France, this Cinco party crams three stages of live music, mariachis, bull riding and lucha libre (courtesy of Dynamo Pro Wrestling) along Cherokee Street between Jefferson and Nebraska avenues (www.cincodemayostl.com) Saturday from 11 a.m. to 10 p.m. There are activities for the kids, party beverages for the adults and the beloved People's Joy Parade for everyone. Among this year's floats, homemade costumes and Gigante puppets you may spot this year's special guest — the Donald Trump piñata. The line to take a whack at that may be longer than the beer line. Admission to Cherokee Street Cinco de Mayo is free. —Paul Friswold


6. Remember the Buffalo Soldiers & their bicycles
Mary Meachum was a free-born black woman who fought slavery by helping black people cross the Mississippi from St. Louis into the free state of Illinois during 1855. Every year her courage and conviction is remembered at the Mary Meachum Freedom Crossing site (St. Louis Riverfront Trail at Prairie Avenue; www.marymeachum.org). This year's event promises to be bigger than ever, with a 10 a.m. bike ride and black history tour along Riverfront Trail, followed by a celebration in honor of Meachum and the 25th Colored Infantry (the "buffalo soldiers" of legend), who covered an incredible 1,900 miles on bicycle from Montana to St. Louis in the summer of 1897. Their mission was to test out the bicycle as a possible conveyance for soldiers in the pre-automobile era; they arrived in St. Louis 41 days later and were greeted by rapturous crowds. The buffalo soldiers will be honored starting at noon, with performances by choirs, dancers and historic reenactors. There will also be games and activities for kids, concessions and a barn dance starting at 4:15 p.m. Saturday. Admission to Buffalo Soldiers and Bicycles is free. —Paul Friswold

7. Participate in Free Comic Book Day
The only thing better than new comic book day is Free Comic Book Day — and today, you get both. The mainstream and indie publishers have a raft of brand-new, free comics just waiting for you to come pick them up at participating shops. There are titles for every age group — from Riverdale, the Roberto Aguirre-Sacasa written tie-in to the CW TV series of the same name, to the relaunch of '60s cartoon superhero, Underdog — with superheroes and sci-fi classics strongly represented. Star Clipper (1319 Washington Avenue; www.fantasybooksinc.com) celebrates the day on Saturday from 10 a.m. to 8 p.m., with raffle tickets distributed to those lined up outside starting at 9:45 a.m.; winner gets one free comic a week for the next year. The Wizard's Wagon (6388 Delmar Boulevard, University City; www.thewizardswagon.com) has Superfun Yeah Yeah Rocketship, DJ BaconBeatz and a flapjack apprentice of Dr. Dan the Pancake Man working the room throughout the day. Admission to free comic book day is free. —Paul Friswold

8. Join in at the St. Louis Book Fair
The peripatetic St. Louis Book Fair has found a new home — Greensfelder Recreation Complex in Queeny Park (550 Weidman Road, Ballwin; www.stlouisbookfair.org). It's a larger location than prior venues, which means there will be more books available for area readers. There will also be more CDs, DVDs and assorted paraphernalia out in the open, but you don't go to a book sale and leave with DVDs. The St. Louis Book Fair is open from 4 to 9 p.m. Thursday, 10 a.m. to 8 p.m. Friday and Saturday, and 11 a.m. to 6 p.m. Sunday (May 4 to 7). There's also a one-hour shopping session open only to the elderly and the disabled from 8 to 9 a.m. Saturday, which should be less crowded and more easily navigable. Admission is $10 on opening night and free all other days. —Paul Friswold

9. Catch an intriguing reading at Subterranean Books
Chasing the King of Hearts seems like a title for a romantic comedy, not a novel about life in Poland during World War II. But Hanna Krall is not your average writer. The Polish author survived the Holocaust as a four-year-old, and she has both a poet's eye for detail and the ability to couch a story of love with the horror of Poland's occupation, leavening her tale with unexpected bursts of dark humor spiked by the insanity of the war. Izolda falls for Shayek and marries him, only to lose him to the camps. She doesn't know if he's still alive, much less if she will live to rescue him (her initial plan) or mourn him. The world spirals out of control, but men and women still flirt even as they worry about their missing teeth and murdered relatives. Prolific translator Philip Boehm (also the artistic director of St. Louis' own Upstream Theater) has been praised for his "glorious translation" of Krall's novel, which finally reached American shores this year. Boehm reads from and signs copies of Chasing the King of Hearts at 6:30 p.m. Monday at Subterranean Books (6275 Delmar Boulevard, University City; www.subbooks.com). Admission is free. —Paul Friswold

10. Thrill to Saturday Night Fever on the big screen
John Travolta was catapulted to super-stardom thanks to his role in Saturday Night Fever. He plays Tony Manero, a working-class nobody who lives for Saturday nights at a Brooklyn disco. On the dance floor he's a king, and every king needs a queen. When he meets Stephanie, a dancer with dreams of moving out of Brooklyn and making something of her life, he realizes that he could maybe benefit from some life changes of his own. Saturday Night Fever celebrates its 40th anniversary this year, and Fathom Events marks the occasion with special screenings of the director's cut of the film in theaters nationwide. You can see it locally at 2 p.m. Sunday and at 7 p.m. Wednesday (May 7 and 10) at Marcus Wehrenberg Ronnie's 20 Cine (5320 South Lindbergh Boulevard; www.fathomevents.com). Tickets are $12.50. —Paul Friswold