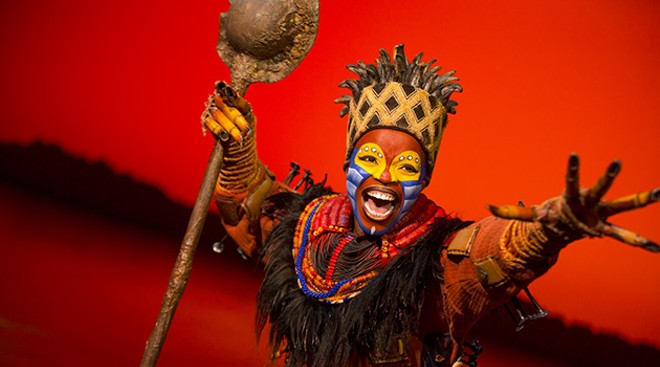 Whether your schedule is packed with Easter events or wide open while others pray, you might want to think about carving out some time in the next week. Plays, readings and classic films are all on offer for those looking for something to do.


1. See a recent Broadway smash
The Westons are an Oklahoma family with some major league problems. Violet, the family matriarch, is sharp-tongued and cruel when not gobbling up pills — and even tougher to handle when she's downing them by the fistful. Patriarch Beverly is a poet whose metier is now alcohol. Their three daughters are, respectively, stuck in a bad marriage, approaching spinsterhood and about to enter a bad marriage. Normally they all avoid each other, but when Beverly goes missing, the family rallies together partially for comfort, as well as to stick in the knives they've been sharpening for each other for quite some time. Tracy Letts' Pulitzer Prize winning drama August: Osage County offers a long glance into the dark world of an American family as it circles the bowl. St. Louis Actors' Studio continues its tenth season with August: Osage County. Performances take place at 8 p.m. Thursday through Saturday and 3 p.m. Sunday (April 14 to 30) at the Gaslight Theater (358 North Boyle Avenue; www.stlas.org). Tickets are $30 to $35.

2. Catch a classic film
One hundred years ago this month, America entered World War I. Cinema St. Louis, the Webster University Film Series and Centre Francophone commemorate the centenary with a screening of William A. Wellman's 1927 film Wings. The silent drama focuses on two rivals (Charles Rogers and Richard Allen) who join the war effort as fighter pilots and end up falling in love with the same woman (Jobyna Ralston). It won the first-ever Academy Award for Best Picture and features some of the most impressive aerobatics ever caught on film. Friday's 7:30 p.m. screening of Wings includes a live soundtrack provided by the Prima Vista Quartet of France. The film is shown at Webster University's Moore Auditorium (470 East Lockwood Avenue; www.webster.edu/film-series). Tickets are $10.

3. Watch a play about some Irish sisters
It's a portentous time in the Mundy sisters' household. Jack, the older brother of the five young women, has returned from his missionary work in Uganda to settle into the small cottage the ladies share in the rural hills of Donegal, Ireland. This blessing soon causes consternation, as Jack seems to have forgotten his Catholicism — a requisite for a priest — and clashes with the stridently religious oldest sister Kate. The sudden arrival of Gerry Evans, one-time beau of Christine and father of seven-year-old Michael, further enrages Kate. As the only gainfully employed sister, Kate's words carry a lot of weight, but she can't shake Chris from her dreams of marriage to Gerry any more than she can stop the rest of the village from engaging in the pagan ritual of Lughnasadh, the Celtic harvest festival. Brian Friel's Tony award-winning drama Dancing at Lughnasa captures an Irish family in the dying days of a glorious summer, right before everything turns harder and meaner. Mustard Seed Theatre closes its current season with Dancing at Lughnasa. Performances are at 8 p.m. Thursday through Saturday and at 2 p.m. Sunday (April 13 to 30; no show on April 16) at the Fontbonne Fine Arts Theatre (6800 Wydown Boulevard; www.mustardseedtheatre.com). Tickets are $30 to $35.


4. Root, root, root for the home team at Busch Stadium
After a few seasons of exciting baseball, the Pittsburgh Pirates regressed to losing in 2016. But then so too did the St. Louis Cardinals. Both teams seem positioned to bounce back in 2017, but who knows this early in the year? Pirates center fielder Andrew McCutcheon is now right fielder Andrew McCutcheon, former Cardinals hero David Freese is back on third base and Gregory Polanco has shown some home run power at the plate, so the Pirates have a weapon or two. Stranger things have happened in baseball than the Pirates running away with the Central Division (see: last year's non-choking Chicago Cubs). The Cardinals take on the Pirates at 6:05 p.m. Monday, 7:15 p.m. Tuesday and 12:45 p.m. Wednesday (April 17 to 19) at Busch Stadium (601 Clark Avenue; www.stlcardinals.com). Tickets are $5 to $235.90.


5. Revisit the intriguing story of the Cardinals' Rick Ankiel
Rick Ankiel's abilities as a baseball pitcher gave him fame, fortune and the promise of a long career. And then his skill abandoned him in the third inning of the first game of the 2000 National League Division Series, leaving him unable to throw the ball to his catcher. It happened again in his next start, and in almost every outing after that. Ankiel reinvented himself as a hard-hitting outfielder with a cannon for an arm, but his ability to pitch never returned. Ankiel calls the nervous condition that invaded his mind "the phenomenon." He named his book The Phenomenon in honor of his nemesis. In it, the former player explains how he worked to remake himself and regain his position in the major leagues, carrying "the phenomenon" on his back the whole way. Ankiel discusses his book with Mike Claiborne of the Cardinals radio broadcast team at 7 p.m. Wednesday at the Ethical Society of St. Louis (9001 Clayton Road; www.left-bank.com). After the talk, Ankiel will sign books (only The Phenomenon; no other objects will be autographed). Tickets are $30 for one person and one copy of the book, or $35 for two people and one copy.


6. Thrill to the The Lion King at the Fox
Musical juggernaut Disney's The Lion King is so much a part of American culture that even if you've never seen it, you'll recognize most of the songs. Simba is a young lion who one day will be king, but his uncle Scar arranges the death of King Mufasa and convinces Simba that Mufasa's death is his fault. Simba runs away to live in the jungle with new friends Timon and Pumbaa. But one day he will return to claim his throne, won't he? The Elton John and Tim Rice tunes seem to imply he can do it. Disney's The Lion King is performed at 7:30 p.m. Tuesday through Friday, 2 and 7:30 p.m. Saturday and 1 and 6:30 p.m. Sunday (April 19 to May 7) at the Fox Theatre (527 North Grand Boulevard; www.fabulousfox.com). Tickets are $55 to $199.