St. Louis Is the Best City in the U.S. for Celebrating Easter

Staying in town for Easter this year? Be glad: You live in the best city to celebrate Easter in the entire country.

That's according to WalletHub in a study released today. The personal finance website looked at the country's 100 largest cities and weighed eleven different factors, including "number of egg hunt events per capita," "share of Christian population" and more. St. Louis came out on top.

And while these studies tend to be a little silly, this one does a great job of highlighting St. Louis' ineffable mix of the secular and the spiritual. We not only have the most churches per capita, but we also have the most brunch restaurants per capita, most candy and chocolate stores per capita and most flower and gift shops per capita. So basically, St. Louis gives you the best chance of attending a beautiful church and rotting your teeth all in one swoop.

Now, we also didn't come in first in every metric — for example, St. Louis ranks seventh for "easter egg hunt events per capita,"  45th for "percentage of Christian population" and 27th for "Easter weather forecast." Considering that St. Louis can experience all four seasons in one week, that last one shouldn't come as a surprise.

But overall, when the math was done, St. Louis was No. 1 — and that's what matters.

To Birmingham, Pittsburgh, Cincinnati, and the other cities trailing in the rankings we say: Better luck next year, and Happy Easter. That hurts, doesn't it? 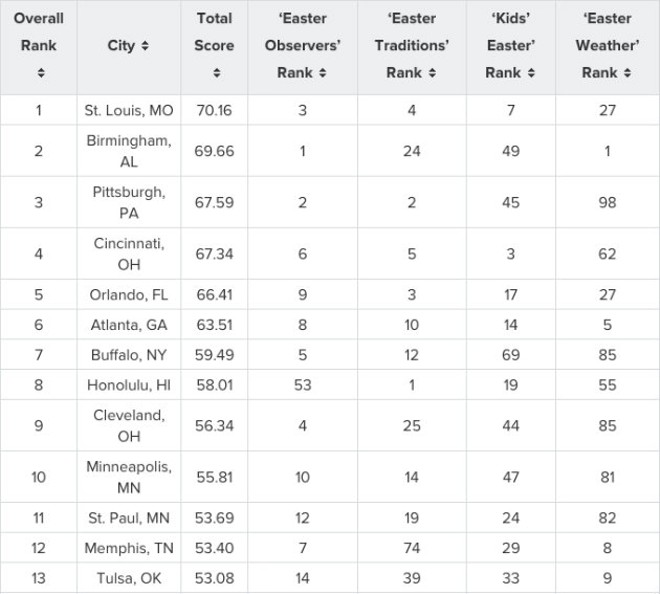