The Best Things to Do in St. Louis This Weekend, April 7-9

This weekend is positively stuffed with great things to do, from ballet and theater to a comic con to a new city-wide party on the Arch grounds. Catch up with old friends or make new ones — but whatever you do, don't delay in making plans.

Interested in catching the city's first Muslim art show or a major record release party? We've got details on those, too.

1. See Sweeney Todd
Wronged by the law and unjustly exiled, Sweeney Todd returns to England with vengeance on his mind. Fortune favors him: An old acquaintance, Mrs. Lovett, has held onto his barbering tools for him. Equipped for business, he opens his barber shop once more, all the while plotting to lure his greatest enemy in for an uncomfortably close shave. Pie shop owner Mrs. Lovett, for her part, figures out a way to upcycle any stray bodies Todd reaps during his grisly quest. Stephen Sondheim and Hugh Wheeler's Sweeney Todd: The Demon Barber of Fleet Street is a musical steeped in darkness and blood, and should put you off shaving for at least a couple weeks. Stray Dog Theatre presents Sweeney Todd at 8 p.m. Thursday to Saturday (April 6 to 22) at Tower Grove Abbey (2336 Tennessee Avenue; www.straydogtheatre.org). Tickets are $20 to $25. —Paul Friswold

2. Watch The Sleeping Beauty
Tchaikovsky's The Sleeping Beauty has stood the test of time. It's the story of a princess cursed by the evil fairy Carabosse to die at the age of sixteen after pricking her finger on a spindle. The good Lilac Fairy intervenes and alters the curse so that Princess Aurora will instead sleep for 100 years, with the kiss of a handsome prince freeing her. The Saint Louis Ballet presents Gen Horiuchi's version of the classic ballet, with its grand cast and grander costumes, this weekend at the Touhill Performing Arts Center on the University of Missouri-St. Louis campus (1 University Drive at Natural Bridge Road; www.touhill.org). Showtimes are at 7:30 p.m. on Friday, 2:30 and 7:30 p.m. Saturday, and 2:30 p.m. on Sunday (April 7 to 9). Tickets are $25 to $69. —Bill Loellke

3. Meet Chelsea Clinton
After spending a big chunk of her childhood in the public eye, Chelsea Clinton went off to college, got married and started a family. Along the way she met a lot of people, saw some interesting places and essentially lived the ultimate Pinterest-friendly life before that was a thing. She's reemerged to the public sphere with a book that offers suggestions for better engaging with the world as a force for good. She signs copies of It's Your World: Get Informed, Get Inspired & Get Going! Friday, April 7, at 5:30 p.m. at Left Bank Books (399 North Euclid Avenue; www.left-bank.com). Tickets are $11 (good for a family of four people, two adults maximum and one paperback copy of the book) and $21 (same as the $11 deal, only you get a hardcover book). —Paul Friswold

4. LOL at the Second City
Legendary Chicago comedy troupe the Second City brings the funny to the Lou with its revue, "We're All in This Room Together." Combining contemporary sketches and songs with audience interaction and the company's patented brand of long-form improv, it's a show that mines humor from everyday occurrences. If you're looking for a little laughter in your life (face it: we could all use some), pick the show that's been stage-tested and audience-approved. The Second City takes the stage at 8 p.m. Friday, 5 and 8 p.m. Saturday and 2 p.m. Sunday (April 7 to 9) at the Touhill Performing Arts Center on the University of Missouri-St. Louis campus (1 University Drive at Natural Bridge Road; www.touhill.org). Tickets are $34 to $36. —Bill Loellke

5. See Wizard World at America's Center
First the bad news: Barry Bostwick, star of stage and screen (and The Rocky Horror Picture Show) had to cancel his appearance at this year's Wizard World comic convention. The good news is that there are still a heap of other film stars (Sean Gunn and Nichelle Nichols), comic book creators (Steve Lavigne and Barbara Slate) and famous automobiles (Speed Racer's Mach 5, plus Koach and Dragula from The Munsters). There will also be cosplayers, vendors selling comic books and pop culture ephemera, and a full slate of panels, Q & A sessions, video game competitions and dance parties. Wizard World stakes place from 3 to 9 p.m. Friday, 10 a.m. to 7 p.m. Saturday and 10 a.m. to 4 p.m. Sunday (April 7 to 9) at America's Center (701 Convention Plaza; www.wizardworld.com). Single day admission is $39.50 to $60, and weekend passes are $79.95 to $90. Autographs may require a fee. —Paul Friswold 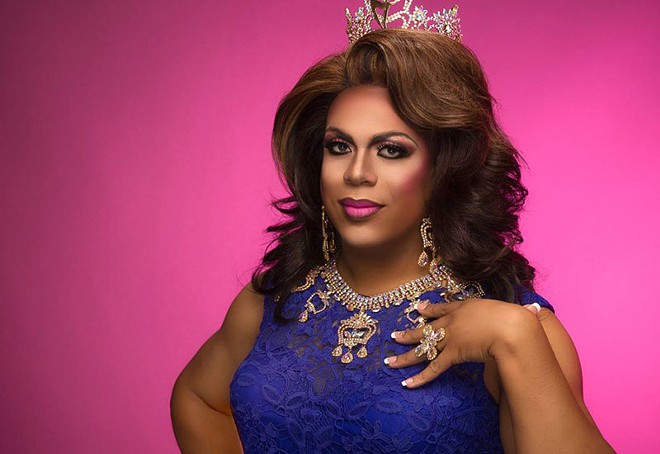 6. Celebrate Caturday Night Fever
Don't be fooled by the clever title: Caturday Night Fever is not a '70s-themed kitty cat party. It is instead a dance party that benefits Tenth Life Cat Rescue. Wear what you're comfortable dancing in, although your outfit should also be cat-ready, because Tenth Life will have a passel of felines at the venue for the pre-party and casual hanging out for the first hour. Once the kitties are tucked into bed, the dancing commences. Your host for the evening is Sean Gunn (Kirk on Gilmore Girls, and Kraglin in Guardians of the Galaxy if you're young), a St. Louis native and clearly a decent human being — he's helping cats in need, isn't he? Caturday Night Fever runs from 7 to 11 p.m. Saturday at the Luminary (2701 Cherokee Street; caturdaynight.eventbrite.com). Tickets are $45 to $125, and there will be a cash bar. This is a 21-and-older event. —Paul Friswold

7. Check out the new Arch grounds
The Arch grounds have undergone large-scale renovations to bring a bit of beauty to the city of St. Louis. Now is the time to spring into action and enjoy it. CityArchRiver celebrates the renovation of the Jefferson National Expansion Memorial with Spring Into Your Park, an afternoon outdoors. Live music will fill the air while you enjoy food and drink, and perhaps participate in the Discovery Map Challenge. This scavenger hunt highlights the park's new additions, with prizes for the the best hunters. Spring Into Your Park takes place from 11 a.m. to 4 p.m. Saturday at the Gateway Arch Park Grounds, North Gateway near the Eads Bridge (www.cityarchriver.org). The event is free. —Bill Loellke

9. See ballet on the big screen
Is a man heroic just because others call him a hero? Pechorin is a military man with a good service record, but he's arrogant and sensitive. He's also cynical and capable of keen insights into his own flaws, and he suffers from a self-destructive streak. And yet he still pursues women he knows will soon bore him, ultimately betraying them as he betrays himself with every nihilistic action. Mikhail Lermontov's A Hero of Our Time is the saga of a Byronic hero smart enough to see his flaws, but not smart enough to discern the meaning of his life. The Bolshoi Ballet presents choreographer Yuri Possokhov and librettist Kirill Serebrennikov's adaptation of the novel at 11:55 a.m. Sunday at the AMC Chesterfield 14 (3000 Chesterfield Mall, Chesterfield; www.fathomevents.com). Tickets are $20. —Paul Friswold