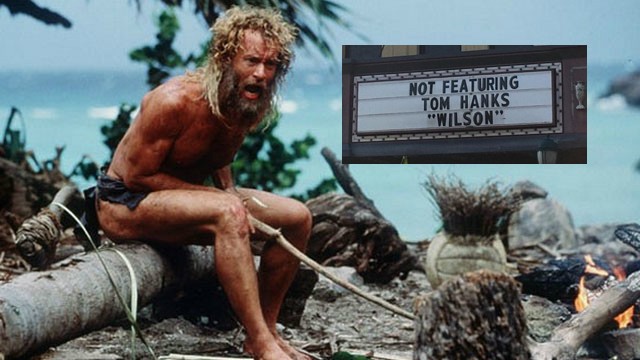 Tom Hanks is an actor who has been in many movies, including one that famously co-starred a volleyball named Wilson. Woody Harrelson is also an actor, but he is no volleyball.

That point was recently made by the Tivoli, the art house theater in the University City Loop. The theater is now showing Harrelson's new film Wilson, an indie based on a graphic novel by Daniel Clowes. This Wilson is "a lonely, neurotic and hilariously honest middle-aged man" — not an 8.8-ounce sphere made of leather panels.

Lest anyone be confused, the Tivoli's predictably clever marquee announced that Wilson was "not featuring Tom Hanks." And that drew the attention of no less than Hanks himself.

That is correct. Woody Harrelson! I want a ticket! In St. Louis. Hanx (not Harrelson) pic.twitter.com/FFMLBrvqXS

It is unclear if the star was actually in St. Louis at the time of the tweet or if he was simply resharing an image, but if the former, it's probably because he's very excited about the Loop Trolley's debut test runs over the weekend. Who wouldn't be excited about that?

We've reached out to Woody Harrelson's people for comment on whether he is excited for the Loop Trolley. We'll update this post if we hear back. (Maybe.) In the mean time, @tomhanks, see you at the theater?