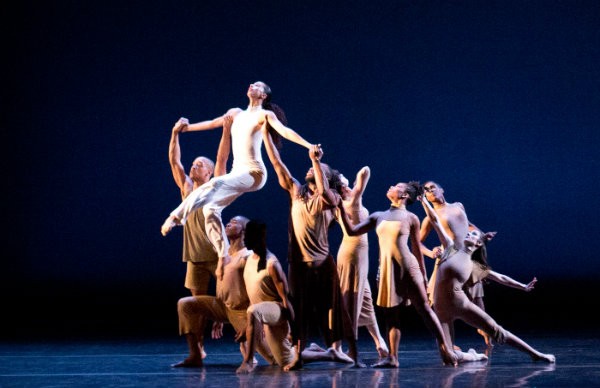 When many people think of dance, they think of women. But even though more women train to be dancers, men still dominate the role of choreographer. Dance St. Louis plans to tackle sexism in the dance world head on — with a new production at Touhill Performing Arts Center this weekend that highlights notable women in history and showcases some talented female choreographers, too.

New Dance Horizons V: Women Who Inspire is the fifth rendition of the nonprofit dance presenter's annual production pairing local dance companies with national choreographers for a show of world premieres. For this year's show, which features MADCO, the Big Muddy Dance Company and Saint Louis Ballet, choreographers were asked to choose a notable woman in history as their inspiration.

The women chosen are lesser-known heroes, not the usual roster of household names. Take Hildegard of Bingen, chosen by San Francisco choreographer Amy Seiwert as inspiration for the piece she created for Saint Louis Ballet. Seiwert discovered the 12th century composer, mystic and abbess when she heard her music played live — and was blown away.

"The struggles of creation often have to do with just lack of opportunity for women in the arts, I feel, and if that’s happening now, what was it like when she was creating? That she even wrote in Latin was considered mind-blowing back at that time," Seiwert says. "The more I learned about her, the more I read about her, I just found her to be such an inspiring story of a strong, female artist."

Seiwert aims to make past meet present in her piece, channeling the timelessness in the music and bringing it into a contemporary realm.

"I do contemporary ballet, so what I do is I use the classical ballet language hopefully in ways that you don’t expect," she says.

Another piece is by Wendy Rein and Ryan T. Smith, founders and co-artistic directors of San Francisco contemporary dance company RAWdance. They chose both Susannah Cahalan and Louise Bourgeois as the inspiration for their piece with MADCO.

"We were drawn to women who had used art not necessarily to intentionally inspire folks around them, but to deal with their own issues, their own dramas, and that through this kind of exploration they had created these works that were incredibly inspiring," Rein says. Cahalan, a Washington University alum and author of Brain on Fire: My Month of Madness, experienced a rare autoimmune disease that attacked her brain and cause her to lose a month's worth of memory. Bourgeois was a 20th century French-American visual artist whose work grappled with insanity, intention and destruction.

The physical elements of both Cahalan's disease and Bourgeois' art served as an inspiration for the choreographers.

"It was both horrifying and fascinating because you’re hearing about all of these different ways in which limbs are moving, and there’s a lot of twisting that can be caused because of this, and moments of stillness or moments of spasm," Rein says. "There were so many things on a physical level that really led toward generating movement, and so when we were looking through various visual artists, part of what of what I feel about Louise Bourgeois’ work is that a lot of the physical elements she was playing with in her drawing and her sculpture were things that we had also seen echoed by Susannah Cahalan."

While these physical qualities are not embodied by the dancers in a literal sense, they influenced the piece with tense movement, dramatized breaths and repetitive music.

"You’ll see the tension brewing out of the body, kind of this uncontrolled release that has to happen," Smith says. "It’s a dark piece."

The third work in the program is by Chicago-based choreographer Stephanie Martinez. The Big Muddy Dance Company performs her piece, which is inspired by Gabriela Mistral, a Chilean poet/diplomat and educator who became the first Latin American author to be awarded the Nobel Prize in Literature in 1945. Focusing on a poem titled "Miedo" (or "Fear"), the piece is influenced by Martinez's culture and is set to music composed by her sister. You can get a sneak peek of the piece in a segment on Fox 2.

“It’s a great chance to see three impressively strong local companies perform work by three very distinct, different voices in the contemporary dance field. And that’s not something that you’re going to have a regular opportunity to do," Smith says.

Adds Seiwert, "No matter what your entry point is, no matter whether you like one of the companies involved or you just like watching dance on TV, like So You Think You Can Dance or Dancing with the Stars or something like that — if dance and physicality interests you at all, and you go to this show, someone is going to mess with your preconception of what you thought dance was going to be. And that’s always wonderful."

New Dance Horizons V: Women Who Inspire will be at the Touhill Performing Arts Center Friday, March 3 at 8 p.m. and Saturday, March 4 at both 2 p.m. and 8 p.m. Tickets are $20 and include panel discussions, a student artwork exhibit and other pre-show, intermission and post-show events in the price. For tickets and more information, call the Dance St. Louis box office at 314-534-6622, or visit dancestlouis.org.