Your Complete Guide to 2017 Mardi Gras in St. Louis 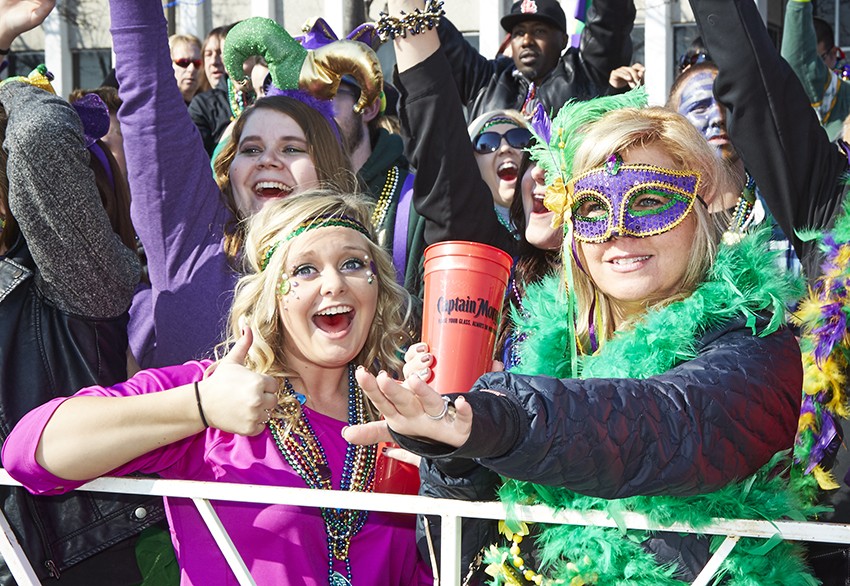 OK, so the main event isn't 'til next weekend, and Fat Tuesday isn't 'til a few days after that, but let's face it: Mardi Gras kicks off this weekend, and everyone in St. Louis knows it. Queue up for the Beggin' Pet Parade or thrill to the Wiener Dog Derby, and then start figuring out where you'll be on February 25. We've got all the best deals below.

5K Run for Your Beads
Get your exercise, St. Louis Mardi Gras style. Show up in your best purple, gold and green costume and race your way through the historic Soulard neighborhood. In true Mardi Gras spirit, pit stops along the race route will feature complimentary beer and hurricanes (for runners 21 and older). All registrants will receive a limited edition 5K Run for Your Beads t-shirt. Saturday, Feb. 18, 9 a.m. $30 pre-registration; $35 race day. Lafayette Ave. & 8th Street, mardigras.com/events/

Beggin’ Pet Parade
Join grand marshals Anna Elise Parks and Lisa Hart of KTVI for one of the largest pet parade in the world. As the Guinness World Record holder for “Most Dogs in Costumed Attire,” the Beggin’ Pet Parade features thousands of dressed-up pets and plenty of highlights, including a coronation ceremony for the best pet costumes, a wiener dog derby, and a Beggin’ sampling for pets. A required registration fee of $10 for each pet participating in the parade benefits the Open Door Animal Sanctuary. All other activities are free to parade spectators. Sun., Feb. 19, 10 a.m.-4 p.m., Free. 314-982-3523, www.begginpetparade.com. Soulard neighborhood, Allen Ave. and Menard Street.

Wiener Dog Derby
If your dog is more of a speedster than a stroller, the Wiener Dog Derby starts at 2 p.m. at Wiener Stadium (Lafayette Ave. and S. Ninth Street). There are four divisions based on age, with the Wiener Wannabe class open to non-dachshunds small enough to fit in the starting box. Both events are free for spectators, though it’s $10 to enter your mutt in either the parade or the races. Sun., Feb. 19, 2 p.m., free for spectators. Soulard Market Park, Lafayette Ave. & S. 9th Street.

The Grand Parade
The parade starts at 11 a.m. at Busch Stadium, but things really kick off when the lead marcher hits Soulard. The entire neighborhood becomes a street party that lasts late into the night, with drink and food specials at most bars, music in the streets and beads flying about hither and yon. Admission to the parade and Soulard is free, but bring money for party fuel. Sat., Feb. 25, 11 a.m., www.mardigrasinc.org. Anheuser Busch, 1 Busch Place, St. Louis, 800-342-5283.

High Heel Drag Race
If you think running is hard, try doing it in high heels. Once you are done taking in the sights of the Mardi Gras Parade, head on over to Nadine's Gin Joint (1931 South Twelfth Street; www.mardigrasinc.org) at 3 p.m. today where full-drag performers runs don their best attire and heeled footwear for an entertaining race in Soulard. But there are a few bonuses this year. There's an all-genders heat, where you can wear your shoes of choice for a relay race, and a "boys in heels" category where the men do not have to wear a dress, but need heels. There will be lots of running, but probably more balancing. Admission is free, and winners get prizes and beads, of course.

Duke’s
Duke’s, the Soulard sports bar, is teaming up with Jim Beam and Red Bull to bring the ultimate all-inclusive Mardi Gras “Duke’s Tent” experience. For $65, Duke’s tent tickets include all day in-and-out access to a heated tent in the heart of Soulard, with all-you-can-drink signature cocktails and beer. A lineup of national and local performers includes headliner Big Once from Chicago, as well as St. Louis legends DJ Mahf, Nappy DJ Needles, & VThom. For more information, and to purchase tickets, visit facebook.com/DukesinSoulard.