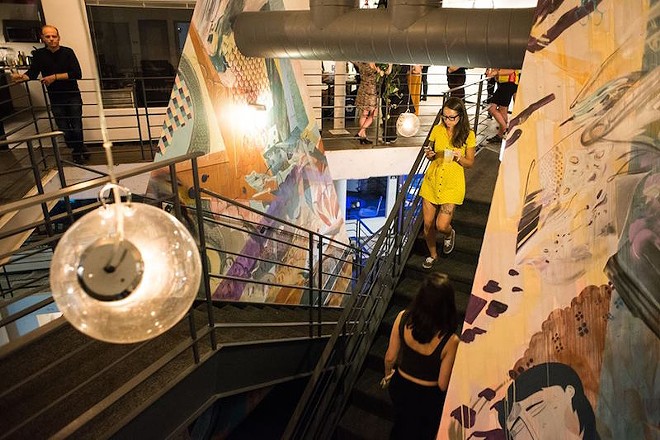 The 13,500-square-foot TechArtista building has hosted a variety of startups since opening in 2014. Now Living Collective, which began as an online store, will bring in customers, too.

Visitors to Living Collective will have a chance to see the 24 x 10-foot mural Supper Club, by local artist Edo Rosenblith. The storefront will also host events, openings, and trunk shows—a unique integration of retail and art in a “collective living experience.” “The retail and boutique showroom will double as a gallery and workspace, which is exciting for us to explore,” says TechArtista partner Eric Hamblett in a prepared release. “By highlighting designers and technical arts in one area, we hope to cross mediums and introduce a new concept for everyone to enjoy.”

“Retail is difficult in this day and age, so we’re trying to provide support for those who need it. We’ll be working with local artists to put out their products, and part of the proceeds will be donated to a charity of the artist’s choice,” says Noonan.

She adds, “The energy … is incredible; they’re trying to cultivate some really fun, exciting things. By having all these startups and businesses in there, you can bounce ideas off of a lot of people.”

For the boutique, that includes HEX, a one-woman agency specializing in matching projects with creators and influencers to elevate brands, and telling their stories through creativity and art. A “creative collaboration agency,” HEX will work with Living Collective and TechArtista to organize events and pop-ups, as well as curate art and local brands to exhibit in the space.

“What drew me to TechArtista was that it’s got such a collaborative and inspiring atmosphere,” Heying says. “There are people from all kinds of businesses that are in the same position as you.”

The event is free to the public and will feature free food, music, and pop-up booths by other local favorites like Taco Circus, Intoxicology, May’s Place and more.

“It’s a showcase of [HEX and Living Collective]’s favorite brands,” Heying says. “It’s a tribute to the local community and all these amazing businesses. It’s a way for people to come out and learn more about the kinds of people I like to work with—small businesses that are trying to reach more people.”

In addition to the festivities, the “Love Spells & Locals” event will feature a donation drop-off for the Edwardsville chapter of Support the Girls; the charity collects and distributes donations of new and used bras and new, sealed packages of tampons and pads to homeless women and girls.