Married to a Rock Star, Stephanie Howlett Did the Unthinkable 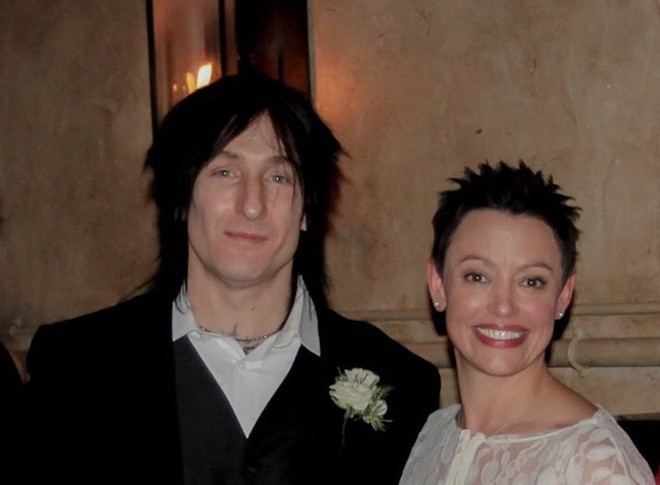 Last month, attorney Stephanie Howlett did something that few (if any?) members of the St. Louis legal community have done before: She married a rock star.

But it's what she did this month that had friends and colleagues raising their eyebrows.

She took her husband's name.

Howlett, who works for the firm of Clayton defense attorney Travis Noble, says she was unprepared for the onslaught of shock, surprise and faux-concern that greeted her decision to change her name to Stephanie Howlett Fortus. (Her husband, Richard Fortus, has been a guitarist with Guns N Roses since 2002; he is also known locally for his work with the Pale Divine.)

"It was the most natural thing in the world to me," she says. "I didn't have to search my soul. I'm getting married, he has children who have his name — I thought, I'd like that sort of completeness. I didn't really give it a second thought."

But just about everyone she told — and as any woman who's changed her name can tell you, there are an endless number of people you have to tell, as well as a ton of paperwork — felt the need to weigh in.

"People would say things like, 'Oh my gosh, are you scared your clients won't be able to find you?'" she says. "I've been a lawyer for almost twenty years. I'm hopeful that clients will know how to find me because of the job I've done, and not just because they know my name."

Howlett (henceforth to be known in this story as Fortus) says she was weathering all the commentary one conversation a time until yesterday morning, when a Facebook comment pushed her over the edge.

She'd posted a video of her husband, and a friend took it upon herself to comment, off topic, about her surprise about the name change. Again.

Starting a whole new thread, Fortus posted, "This should put everyone on notice that I'm wholly unconcerned with your opinion of my taking my married name. Let's make a deal. I'll keep to myself the name I think you should be called and you do the same. Thanks in advance, SHF."

By 6 p.m. last night, the post had scored 261 likes and a flood of supportive comments. Women were chiming in about how they'd gotten similar snark for not changing their names, or for hyphenating. Others posted that they changed their names and had no regrets.

Fortus says now that the complicated issue has been dealt with, she can go back to the matter at hand — getting all the pieces of her professional life switched over. And that means, inevitably, more conversations.

But really, things could be worse. As one funny friend posted on Fortus' Facebook screed, "Just glad you're not Stephanie Slash."