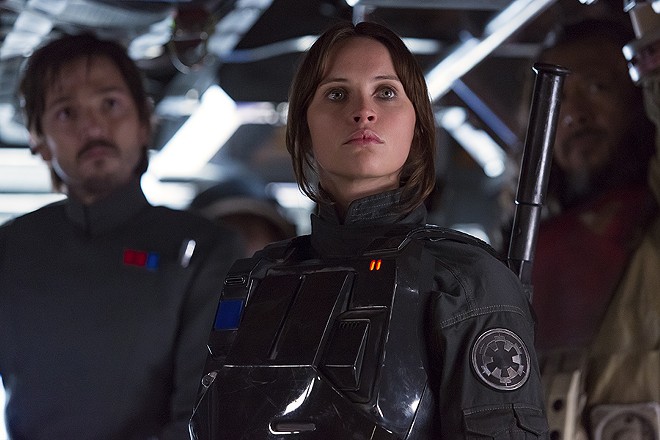 The first week in January is historically a super-slow time — it's cold, it's often snowy, and everyone's got holiday hangover. But there's still a lot going on this weekend, and most of it is relatively cheap, if not downright free. So shake off those winter blues; here are six things you could do that are far more interesting than anything on Netflix.

1. Celebrate Star Wars at the science center
Now is the winter of our Star Wars discontent. Rogue One: A Star Wars Story is out in theaters, which means we have to wait at least another year for the next film. Plus, Carrie Fisher's tragic death last week has left at least two or three generations of fans heartsick. The only thing that can fix our collective angst? More Star Wars. The Saint Louis Science Center (5050 Oakland Avenue; www.slsc.org) comes through in a big way with First Friday: Star Wars, which celebrates all facets of fandom. The Gateway Squad of the 501st Legion of St. Louis stormtroopers will patrol the building, you can watch Light Saber Fight Club do its thing at 7:30 p.m. and enjoy a Star Wars fashion show at 8 p.m. The Omnimax will screen Rogue One at 8:30 and 11 p.m. (tickets are $11), and at 9:30 p.m. Magic Smoking Monkey Theatre reprises its insane play, The Making of the Star Wars Holiday Special (free admission). First Night starts at 6 p.m., and most activities are free.


2. See an Arthur Miller classic at the Rep
World War II has been won and done for just over a year, and Joe Keller's life still hasn't returned to normal. There is the pain of his missing older son Larry, presumed by most to be killed in action at this point, but Joe's wife Kate refuses to give up hope. There's also the matter of Joe's former business partner Steve, still in prison for shipping defective engine parts to the military. The corners cut by their factory resulted in the deaths of 21 American pilots, and the stain of it still clings to Joe. When his second son, Chris, proposes marriage to Steve's daughter Ann, Joe's life begins to fall apart. Arthur Miller's tragedy All My Sons is a stark look at the failures of a man who has the appearance of decency but not the morals. The Repertory Theatre of St. Louis continues its season with All My Sons. Performances take place Tuesday through Sunday (January 6 to 29) at the Loretto-Hilton Center (130 Edgar Road; www.repstl.org). Tickets are $18 to $81.50. 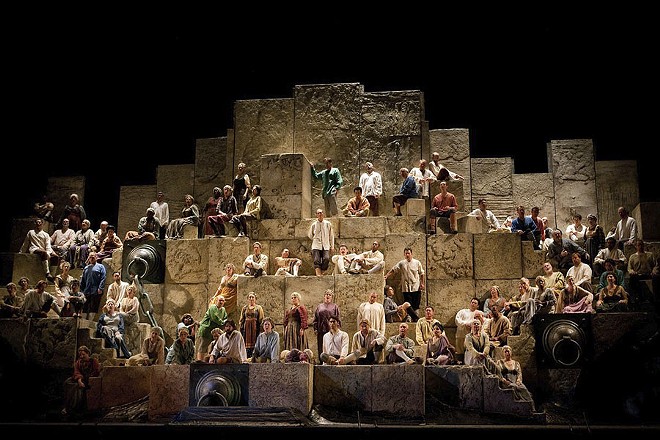 3. Catch an opera matinee (live) on the big screen
Giuseppe Verdi established his long career with his Biblical opera Nabucco, which is inspired by the story of Nebuchadnezzar. In Verdi's version, Nabucco has two daughters, Fenena and Abigaile. The former is currently a hostage of the Israealites, who have taken her captive in a last-ditch effort to stop Nabucco from razing their city, Jerusalem. Fenena feels safe there because of the presence of Ismaele, who formerly visited her home as an ambassador, when the two fell in love. Unfortunately Abigaille also loves Ismaele, and arrives to tell him that if he chooses her, she will do what she can to stop her father from killing the Israelites. Abigaille's future plans involve overthrowing her father and setting herself on the throne. When Nebucco audaciously proclaims himself a god he is felled by insanity, a curse bestowed upon him by the Israelites' god — and things only get worse for the Babylonians when Abigaille takes over. The Metropolitan Opera broadcasts its matinee performance of Nabucco with Placido Domingo in the title role live to theaters across the country Saturday at 11:55 a.m. You can see it locally at the AMC Esquire 7 (6706 Clayton Road, Richmond Heights; www.fathomevents.com). Tickets are $19.95 to $23.89.


4. Get new insight into dying at Webster U
Cancer, AIDS and many other diseases are not always a death sentence, thanks to advances in medicine — but for some people, all medicine can do is delay the inevitable. How can you go on living knowing that each passing day means the inevitable is that much closer? Director Amy Hardie spent three years filming six hospice patients approaching the end of their lives for her documentary Seven Songs for a Long Life. These six people faced death with a song on their lips thanks to a nurse who enjoyed singing. Over the course of the film they deal with the pressures of writing a will and finding someone to care for a child by escaping their sense of helplessness through song. Seven Songs for a Long Life is a reminder that death waits for us all, and how we spend our time is the only thing we can actually control as that day approaches. The film screens as part of the Webster Film Series at 7:30 p.m. Friday through Sunday (January 6 to 8) at Webster University's Moore Auditorium (470 East Lockwood Avenue; www.webster.edu/film-series). Tickets are $5 to $7.

5. Cap off the Winter Classic at Busch Stadium
The NHL Bridgestone Winter Classic closes with one final day full of hockey and surprises. At 11:30 a.m. Sunday, January 8, at Busch Stadium (Broadway and Poplar Street; www.stlcardinals.com) the Blues players will engage in a skills competition. St. Louis' Greatest Pick-Up Hockey Game takes place at 1 p.m. Sunday, with Blues owner Tom Stillman and Cardinals big bird Bill DeWitt III captaining a game between Blues and Cardinals alumni; it should be interesting to see who on the Cards' team can skate, let alone skate backwards. Those captaincies are not just ceremonial. Both DeWitt and Stillman partake in a weekly skating session, so don't be surprised if they end up on the scoreboard. Immediately after the Blues-Cards game, a team of police officers and a team of firemen take the ice for a game. Admission is only $10, and proceeds benefit Blues for Kids youth hockey programs and Cardinals Care.

6. See a film about Star Wars toys
It's hard to believe now, but back when the original Star Wars was released many toy companies wanted no part of the merchandising rights. Who'd buy toys for a lowly science-fiction film? It turned out many millions of people would happily do so. Director Brian Stillman's documentary Plastic Galaxy: The Story of Star Wars Toys takes you deep into the workings of Kenner Toys, manufacturer of the thousands of variations of action figures, space ships and playsets, to hear from designers how they made those earliest figures. Stillman also meets with several rabid collectors and films their prize pieces as the. Along the way you learn how Star Wars toys transformed the market for film toys and merchandising tie-ins, for better and for worse. Plastic Galaxy screens at 7 p.m. at the Missouri History Museum (Lindell Boulevard and DeBaliviere Avenue; www.mohistory.org) as part of the museum's current exhibition, Toys of the '50s, '60s and '70s. Admission is free.