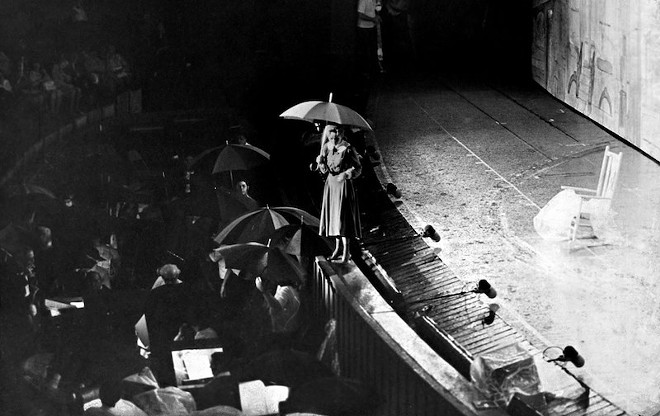 The death of Debbie Reynolds barely a day after her daughter Carrie Fisher's passing seems like the sort of cruel, one-two punch only 2016 could provide. Both women forged individual remarkable careers in entertainment — and often competed for the same spotlight, as Fisher detailed in her semi-autobiographical novel, Postcards from the Edge — though they did sometimes share the stage together with happy results.

One such occasion was right here in St. Louis. Reynolds starred in the 1973 Broadway revival of the musical Irene, which visited the Muny for a week; a seventeen-year-old Fisher found a place in the ensemble.

The show is a 1919 play about a young Irish immigrant who falls into a relationship with a wealthy industrialist, and then gets involved in a new fashion line designed by the flamboyant "Madame Lucy," an effeminate man played by George S. Irving. (Irving improbably passed away on December 26 — it's been a hell of a year for the cast of Irene.)

The production was plagued by illnesses, cast shuffling and backstage problems, and when it arrived in St. Louis performances were twice delayed by rain. Reynolds, ever the professional, ventured onstage under an umbrella during one of these downpours and took requests from the crowd — Singin' in the Rain opened her impromptu revue. It's the sort of incredible moment that happens at the Muny.

Reynolds returned to the Muny twice more, most famously in The Unsinkable Molly Brown in 1989. It was the last time the Muny has mounted the show, although it will return in 2017 as part of the 99th season. Maybe this is a sign that if we can collectively keep going, things (waves hands over all of this year's sorrow and woe) will improve. Molly Brown would have certainly believed so.

Tip of the hat to the Muny for providing the photo and information.