5 Great Things to Do This Weekend for $16 or Less 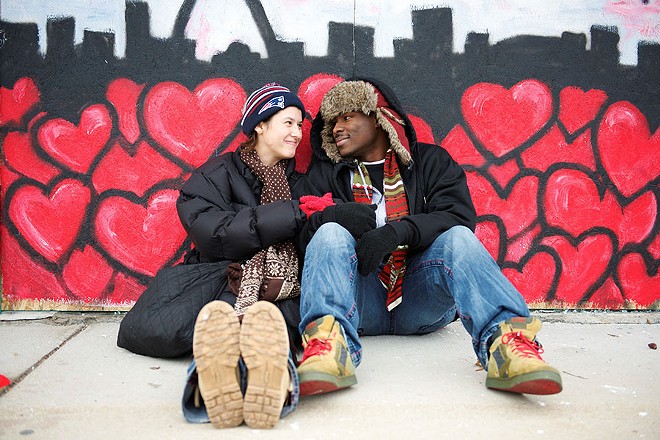 Frigid temps got you down? Why not warm your spirits at the Humans of St. Louis art opening tonight at the Regional Arts Commission? It's totally free — and shows the highlights captured by photographers Lindy Drew, Caroline Fish and Dessa Somerside.

If that's all too life-affirming, may we suggest the World's Largest Ugly Christmas Sweater Party at Ballpark Village? Surely stuffing so many people into a space when they're all clad in thick wool will be enough to literally warm things up.

Those are just two of the highlights on this week's list. Read on for more, and full details.

1. Catch an art show at the Regional Arts Commission
If you do a lot of walking, you will encounter any number of people. You don't really meet them, though. To do that you'd have to stop and engage in conversation, which means listening more than speaking. It's an old-fashioned thing to do in a country dominated by social media, which is more about broadcasting our own beliefs and ideas. Humans of St. Louis (the local wing of the "Humans" movement started by Brandon Stratton's Humans of New York project), is a documentary storytelling collective that aims to meet in person individual St. Louisans and give them a platform to discuss what's on their mind. Photographers Lindy Drew, Caroline Fish and Dessa Somerside have met more than 1,200 people during the project. The art exhibition Humans of St. Louis is a collection of their favorite encounters. The show opens with a free reception from 6 to 8 p.m. Friday, December 9, at the Regional Arts Commission (6128 Delmar Boulevard; www.racstl.org). The show remains up through February 4, and the gallery is open daily.


2. See a play about a china rabbit
Edward Tulane is a fancy china rabbit who accompanies the well-to-do human child Abilene everywhere. He's a self-centered rabbit who doesn't consider the feelings of anyone else, but his outlook changes when he slips from Abilene's grasp and ends up on the ocean floor. Saved by a fisherman's net, Edward begins a journey that teaches him about the value of compassion in a world that can be unexpectedly harsh, even to fancy china rabbits. Kate DiCamillo's book The Miraculous Journey of Edward Tulane has become a standard for young readers. Dwayne Hartford has adapted the story for the stage, and Metro Theater Company mounts the production as a holiday gift for the city. The Miraculous Journey of Edward Tulane is presented at 7 p.m. Friday and at 1 and 4 p.m. Sunday (December 9 to 18) and then daily at 2 p.m. (December 26 to 30). Performances take place at the Missouri History Museum (Lindell Boulevard and DeBaliviere Avenue; www.metroplays.org). Tickets are $16 to $20.

3. Party at Ballpark Village for a Good Cause
Last year more than 1,200 people wore their ugliest sweaters to Ballpark Village and set a record for the World's Largest Ugly Christmas Sweater Party. Unfortunately, Kansas University shattered the record just three weeks later so it's time to up the ante. This year's World's Largest Ugly Christmas Sweater Party takes place Saturday at 7 p.m. at PBR at Ballpark Village (601 Clark Avenue; www.stlballparkvillage.com). There are two ways to enter. For the first, you pay $8 and wear your own fugly sweater. The second option is $30, but you receive a vintage ugly sweater to wear at the party (see www.worldslargestuglychristmassweaterparty.com/purchase-tickets/ for sizing info and other details). Both options get you discounted drinks, access to photo booths and entry into three contests. The event benefits Operation Food Search, so bring a couple canned goods or some cash for the cause.

4. See a holiday show by the Gateway Men's Chorus
The musical celebrations of the season are coming fast and furious these days, but make time to go to the Gateway Men's Chorus' show, Glow. The program features the 100-voices-strong chorus singing classic Christmas carols with a twist, other holiday favorites and a show-stopping performance of John Rutter's Gloria with a brass and percussion ensemble. Oh, and this show also marks the start of the the chorus 30th season of raising their voices and raising our spirits. So go celebrate with them. Glow is performed at 8 p.m. Friday and Saturday (December 9 and 10) at the Union Avenue Christian Church (733 North Union Boulevard; www.gmcstl.org). Tickets are $15 to $25.

5. See a classic of the silent era at Webster U
Lois Weber went from street corner evangelist to actor to director during the silent era. Weber was the first American-born woman to direct a feature film in 1914 with The Merchant of Venice, and by the end of that decade she had started her own production company. This was a necessary step, as she wanted to make films that addressed serious social issues such as alcoholism, abortion and prostitution (clearly, she still had that evangelical spirit). That last one is the subject of her feature film Shoes, based on Jane Addams' novel of the same name. It tells the story of Eve, a young woman who must support her parents and three siblings with her very small salary. Her current pair of shoes is falling apart, exposing her feet to every loose nail and puddle, but there's no money to buy another pair. Cabaret Charlie is a disreputable man who desires her company: If she were to accept his advances, he would buy her the shoes she needs. The Webster Film Series screens a restored version of Shoes at 7:30 p.m. Sunday at Webster University's Moore Auditorium (470 East Lockwood Avenue; www.webster.edu/film-series). Weber's short subject "Suspense" precedes it. Tickets are $5 to $7.