Seven Fun Things to Do This Weekend

So it's finally feeling wintry in St. Louis — so what? There are plenty of amazing things to do this first weekend in December, most of them entirely indoors. You can drink 'til you're warm at the RFT's very own Holiday Spirits, laugh 'til your face hurts at Magic Smoking Monkey's tribute to the worst Star Wars-themed holiday special of all time, or even see a play (gently) mocking Barbra Streisand. It really is the most wonderful time of year.

Here are our picks for seven great things to do, starting tonight.


1. See a play about Babs' basement
The rich ain't like you and me — their incredible resources allow them to make their dreams a reality, no matter how ludicrous they might be. Barbra Streisand, for example, has created a faux shopping mall in the basement of her mansion to house her collections of vintage clothes, furniture, dolls and other indulgences. They're arranged in shops designed to mimic a turn-of-the-century Main Street shopping district. This is all true, by the way. Jonathan Tolins' one-man comedy Buyer & Cellar gussies up the absurd real-life situation by imagining that Babs has hired someone to create displays and maintain the stores — that's where Alex comes in. He's an out-of-work actor who gets to be Streisand's subterranean shop boy, and soon find himself engaging in improv with her. It's an odd show, but a funny one. Stray Dog Theatre presents Buyer & Cellar at 8 p.m. Thursday to Saturday (December 1 to 17) at the Tower Grove Abbey (2336 Tennessee Avenue; www.straydogtheatre.org). Tickets are $20 to $25.


2. Watch some Mamet at Gaslight Theater
When you're desperate, you make desperate decisions. And so when Donny sells a customer a buffalo nickel and then starts thinking he got rooked on the deal, he decides to steal it back. And if he's going to steal one coin, he might as well steal the guy's whole collection. His plan is to pull off the heist with his employee, Bobby, but once Don's poker buddy Teach hears about the scheme he wants in, too — and he's far more violent than either of them. David Mamet's American Buffalo is about small-time crooks whose dream of a big score is as two-bit as they are. The American dream may be open to everyone, but some people's dreams are too small and surly to thrive. St. Louis Actors' Studio presents American Buffalo at 8 p.m. Thursday through Saturday and at 3 p.m. Sunday (December 2 to 18) at the Gaslight Theater (358 North Boyle Avenue; www.stlas.org). Tickets are $30 to $35.

3. See a sweet old chestnut of a play Daisy Werthan's driving days are done. She's wrecked another car, and her son Boolie orders her to use the chauffeur he's hired. But that doesn't mean she has to like it. She resents her driver, Hoke, and treats him poorly, and not just because he's a black man. In the Georgia of 1948, however, it's not like an older Jewish woman and her black driver are going to be friends. Still, despite their cultural differences, Daisy and Hoke have a lot in common, as they discover throughout the course of their long relationship. New Jewish Theatre continues its season with Alfred Uhry's Pulitzer Prize winning drama Driving Miss Daisy. Performances take place at 7:30 p.m. Wednesday and Thursday, 8 p.m. Saturday and 2 p.m. Sunday (December 1 to 18) in the Wool Studio Theatre at the Jewish Community Center (2 Millstone Campus Drive, Creve Coeur; www.newjewishtheatre.org). Tickets are $39.50 to $43.50.


4. Get into the Christmas spirit with some Dickens
An abrasive millionaire who disparages everyone around him is visited by quartet of ghosts on Christmas Eve who shock him to his core and force him to change his ways for the better. Is this merely wish fulfillment writ large, or another production of Charles Dickens' A Christmas Carol? It could perhaps be both. The Repertory Theatre of Saint Louis brings back its most requested show (adapted by David H. Bell) for a timely holiday run. A Christmas Carol is performed Tuesday through Sunday (December 2 to 24) at the Loretto-Hilton Center (130 Edgar Road; www.repstl.org). Tickets are $18 to $88.50. 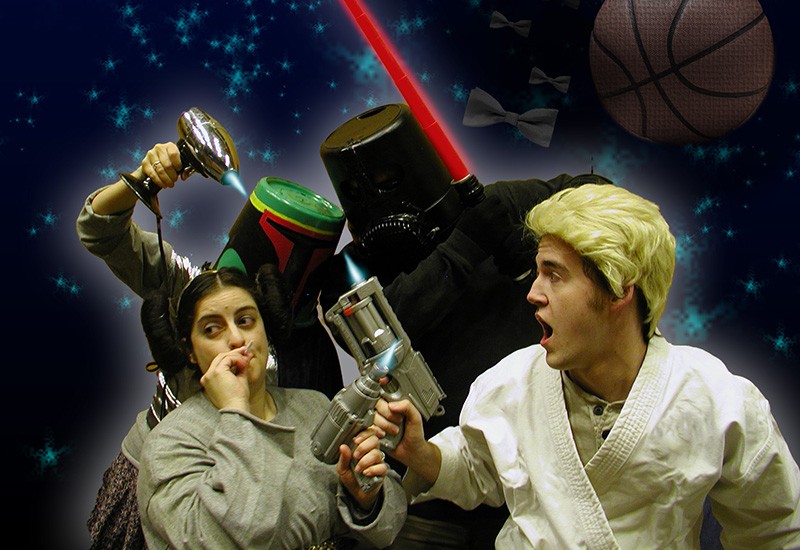 5. See a show about the making of an awful holiday special
Back in 1978 there was just one Star Wars movie and everybody had a theory about who the Jedis were, where Wookiees came from and when Luke and Leia were gonna get together and mash guts. So when the Star Wars Holiday Special aired on broadcast TV, lots of people watched — and were horrified. The production was a jumbled amalgamation of a crappy variety show, a cool cartoon starring new mystery man Boba Fett and a bizarre live-action story about Chewbacca getting home to celebrate Life Day, a Wookiee holiday. And then at the end a visibly high Princess Leia sang a horrible song about love and feelings. Bea Arthur, Art Carney and Jefferson Starship also showed up, because the '70s were relentlessly horrifying. How did this show get on the air? Magic Smoking Monkey is here to explain things with its new production, The Making of the Star Wars Holiday Special. The audience is encouraged to come in costume — either as your favorite Star Wars character or your favorite B-list '70s celebrity — to enhance the insanity of it all. Show times are at 8 and 10:30 p.m. Friday and Saturday (December 2 to 10) at the Regional Arts Commission (6128 Delmar Boulevard; www.stlshakespeare.org). Tickets are $10 to $15.


6. Get your buzz on with the RFT
If you've been banned from the company Christmas party this year, come to ours. RFT Holiday Spirits gives you hors d'oeuvres, unlimited craft cocktail tastings and a commemorative tasting glass, and you won't even have to see your boss dancing. Wood Hat Spirits, Saint Louis Distillery and Narwhal's Crafted Urban Ice proffer specially concocted winter-theme cocktails, while local businesses Anthonino's Taverna, Beast Craft BBQ and the Kitchen Sink handle the food. DJ Alexis Tucci — Nightchaser will create a lively atmosphere for the evening; you get all of this for just $30. RFT Holiday Spirits takes place from 7 to 10 p.m. Saturday at Delmar Hall (6133 Delmar Boulevard; www.rftholidayspirits.com).


7. See what prints are for sale on Cherokee Street
This is a tough time of year for people who hate shopping for gifts. Maybe you loathe the task because you make terrible decisions, or maybe you're just not cut out for the mall scene. Whatever the reason, you still have to find something heartfelt, personal and unique for the special people in your life. Guess what? Those adjectives pretty much describe the art of printmaking, and this Saturday is Print Bazaar on Cherokee. The annual sale of works by the city's finest printmakers features dozens of artists selling handmade, idiosyncratic pieces for a fair price. From 10 a.m. to 6 p.m. Saturday you can roam Cherokee Street looking for the art that speaks to your soul. Maybe it's the "off-kilter view" of seasoned printmaker Arden Goewert. Perhaps you'll find it at the inclusive, LGBT-friendly Westminster Press (3156 Cherokee Street). Printmaking is a democratic art — it's made by all kinds of people, for all kinds of people. Get out there and get you some. There will be artist demonstrations, on-site framing and food trucks. Visit www.cherokeeprintbazaar.com for the full list of artists and participating locations.