Jon Hamm Is Finally Cool with His Huge Wang 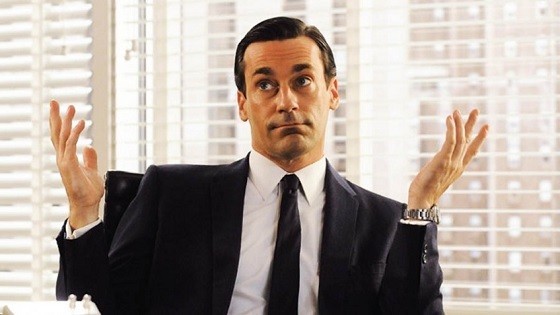 That's nothing new — the native St. Louisan's unwieldy wanger first made headlines in 2013 when New York Daily News reported troubles on the set of AMC's Mad Men. The network reportedly had to request that the well-endowed actor start wearing underwear on set — some in the marketing department even had to photoshop the distracting piece of anatomy out of marketing material for the show.

"The season takes place in the 1960s, where the pants are very tight and leave little to the imagination," a source told the paper. "John's impressive anatomy is so distracting that they politely insisted on underwear."

As Hamm's dong made headlines across the internet — even inspiring a dedicated Tumblr page — Hamm took issue with the intense interest in his intimates. In 2014 interview with Rolling Stone, he vented his frustrations:

"They're called 'privates' for a reason," he told the magazine. "I'm wearing pants, for fuck's sake. Lay off. I mean, it's not like I'm a fucking lead miner. There are harder jobs in the world. But when people feel the freedom to create Tumblr accounts about my cock, I feel like that wasn't part of the deal ... But whatever. I guess it's better than being called out for the opposite."

Some two years later, Hamm has apparently finally made peace with the attention his massive wiener regularly inspires. In an interview with GQ Australia, which recently named Hamm International Man of the Decade, he displayed some new, zen-like feelings of calm on the matter.

"It was a topic of fascination for other people, certainly not me," Hamm explained. "By the way, as rumors go — not the worst."

Maybe these things feel differently when you're no longer in a super long-term relationship? For a swinging single man, that kind of attention may be far more welcomed.

In any case, Jon, as always, thanks for repping St. Louis so damn well. Our finest ambassador.

Jon Hamm's eggplant emoji gets me through the tough times... my tinder match's Dick being as thick as a highlighter pic.twitter.com/xMbw8pYx74