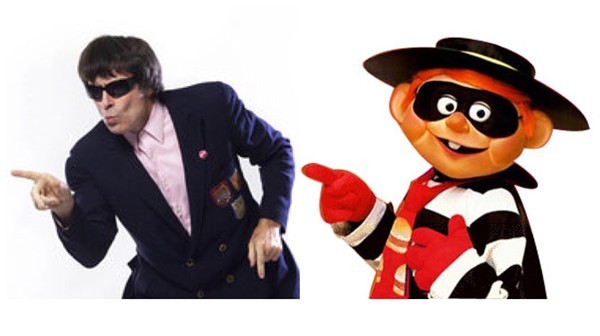 Here are fifteen costume ideas for St. Louisans who'd rather be snarky than stupid.

1. Beatle Bob
The most important piece of this costume is its cost, which should be free — do not, under any circumstances, pay any money for any of its elements. It simply wouldn't be authentic. Dye a mop brown and put it on your head, then don a cheap suit. Go out in public and get in everyone's way, all the time. If someone is trying to see something, be sure that they see the back of your bobbing head instead. Also, eat some McDonald's, apparently.

2. The Loop Trolley
Spend an unholy amount of money on this costume — preferably other people's. Make sure that you make a ton of noise while putting it together. Don't complete it in time for Halloween; cite unexpected delays. The actual elements of the costume itself are unimportant — spray-paint some cardboard boxes or something. It doesn't matter. Just be sure to stand in the way of anyone attempting to enter any nearby business. Kick the shit out of anyone you see riding a bicycle.

3. Eric Greitens Grab an expensive suit, a belt-fed NERF gun and a stack of books on history, politics and humanitarianism. On the way to the party, throw the books in the garbage. Bust through the front door with a high kick and perfectly-executed somersault and begin firing darts everywhere. Accuse the host spiking the punch bowl and being a "career punchatician." Refuse to answer any questions about who paid for your suit.

4. Joe Buck Look smug. No, smugger. Pretend you're smarter than everybody you can see and everybody you can imagine. Start to tell the people around you how smart you are but instead describe what's happening in the room, like "that kid is dressed like Elsa from Frozen," but with the undertone of "I'm smarter than that kid dressed like Elsa from Frozen." Now get a microphone and a bald cap. Halfway through the night, cut off part of that bald cap so some of your hair is visible. Keep doing this at regular intervals. If you can fake vocal chord paralysis, so much the better.

5. A St. Louis Taxi Even though everyone invites you over and over again, asking you to meet them at the party, refuse to show up under any circumstances. Instead, hire a lawyer and try to block Uber from attending. Swear that it's all about fairness.

6. Jay Nixon
Wear a cheap suit and tie. When you get the party, scan the room. Are there black people there? Flee like a piss-baby while leaving behind press releases that state how concerned you are about what's happening in our cities. When someone commits a party foul, refuse to pardon them.

7. A Joy FM Driver Stick a 99.1 Joy! FM sticker on your person. Run headlong into everyone at the party while singing Michael W. Smith songs. Absolutely refuse to take a joke.

8. The Charter Beat-Boxing Guy
Invest in a button-up shirt from the Gap, circa 2008. Show up to the Halloween party early and poison all of the food. Wait until the guests start coming down with symptoms. Start spitting drum fills into the air as everyone around you vomits and cries. Make sure to load up on the hair gel.

9. Ken Bone Get a cheap red sweater and some shitty chinos. Be sure to ask people what they think you should dress up as next year, preferably in a very public place. As they answer, try to achieve a look of pleasantness, but keep your eyes hooded — it will give you the look of someone who secretly has mildly seamy habits. Fifteen minutes later, strip off the sweater to reveal your Obama-style "Bone" t-shirt, and start promoting everything in the room.

10. Stan Kroenke
Embody the black sheep of St. Louis by sporting a drab suit, an ill-fitting toupee, and a mustache that resembles a roofied caterpillar. Accessories abound for this one: a lacrosse stick, tons of play money, Inglewood Rams gear, an extra large asshole ... wait, they don't sell that last one? No matter. As long as you march around hating on St. Louis and flaunting your cash, you should be good to go.

11. The Tire Slasher of Belleville
So, you want to dress like something out of a slasher film? Find yourself the kind of unobtrusive outfit they wear for such skulduggery in Metro East: a tacky pink tutu and a boa. Alternate between interpretive dancing and chasing after cars; authenticity points for cars with Illinois license plates/SWIC parking tags. You'll know you've nailed the part when you look like a nightmare out of kids' TV show. Oh, and don't forget to change your name a few times throughout the course of the evening.

12. Mike Matheny Much like the Unabomber, the Cardinals manager has a manifesto he lives by. So grab yourself a ream of paper from the office copier and you're halfway there. Practice your steely gaze, speak from the gut, and if you're carpooling home, pull a ruinous double switch: maybe buy your designated driver an armful of drinks, throw the keys to the unconscious guy and if anyone questions you, tell 'em you gotta trust your veterans. If you want to go deep, bring a knife, but slash your hand up.

13. The Scamwich Artist
Dress like an accountant on his way to commit minor larceny — oxford shirt, khakis, dorky shoes. Call ahead and complain that you didn't get the Fall Party Cakes you were craving at last year's Halloween bash, but that your host can rectify it by giving you two free turkey sandwiches to go. Show up to collect your booty and freeze like a deer in the headlights if anyone gives you any shit.

14. Jeff Roorda
Draw a badge on a t-shirt in permanent maker, then hock a massive loogie into your hand and rub it through your hair to spike it like a cool '90s kid. Walk the streets looking for someone with a camera, and then ask them to film you ranting about how the Ferguson Effect is like a burrito full of dead police officers. If you see any black people, give them a hand-written citation that just says "war on cops." If they protest, start crying about how hard your job is and all the blood on Obama's hands.

15. The 78th District Absentee Ballots
Tell your friends you'll be wearing a big old paper envelope, but then fail to actually put it on as election law requires. Before you head out for trick-or-treating, make a bet with your friends that you'll collect the most candy — then secretly stash a hundred fun-size Snickers bars in your back pockets. Sneakily pad your candy totals over the course of the night. Act shocked when your friends discover the ruse and tattle to your parents. Get grounded for being an asshole.