A Hillary Clinton-Themed Haunted House Is Coming to St. Louis 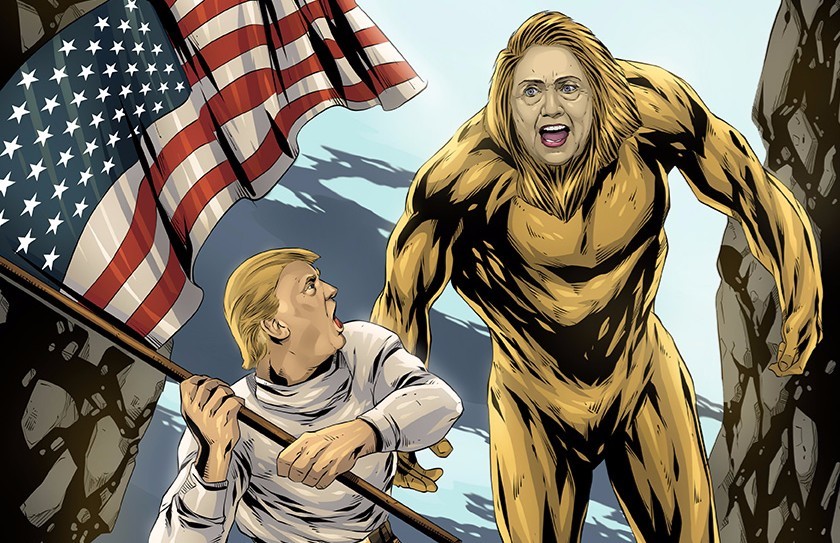 Republicans, well-known for their wit and charm [editor's note: Fact-check this], have been having a field day with Democratic presidential candidate Hillary Clinton in recent months for the last 30 years, concocting such robust nicknames such as "Killary" and "Crooked Hillary" for their opponent. (Why they left "Crooked Clinton" and its obvious alliteration on the table we may never know, but they're the professionals.)

Now, with the second presidential debate — taking place in St. Louis! — looming on the horizon, an Illinois entrepreneur has upped the ante with a timely haunted house sideshow dubbed "Hillary's House of Horrors." The traveling attraction, purportedly brought to you by something called "the American Horror Show Super PAC," announces that it will be following Republican candidate Donald Trump around to his rallies throughout October, though its website stresses that it is not affiliated with the Trump campaign. OK, fine.

In addition to an upcoming rally stop in Colorado, owner David Brown of Springfield, Illinois — who registered his new Hillary-hating company with the Missouri Secretary of State on September 25 — says he'll be setting up Hillary's House of Horrors in St. Louis just in time for next week's debate. His press release says the haunt will be appearing this Saturday and Sunday from 2 p.m. to 9 p.m. in Forest Park at the intersection of Forsyth and North Skinker.

In a press release, Brown's group promises "A Future so Terrifying it will Scare the Pants(uit) off of You!" We get it, because "Killary" wears pantsuits!

....WAIT WE GET IT, BECAUSE SUPPOSEDLY SHE'S KILLED A WHOLE BUNCH OF PEOPLE!! Ah, Republicans: how droll!


Just in time for Halloween comes Hillary's House of Horrors, a traveling sideshow haunted house which will be appearing outside Donald Trump rallies throughout the campaign season. Using live actors, exhibits, 3D and Smell-O-Vision technology, Hillary's House of Horror exposes the greed, deception, and malfeasance of Hillary Clinton and offers a terrifying preview of life in these United States with HRC in command at 1600 Transylvania Avenue.

Sounds scary! Through what means will we be illustrating these horrors?


* See Crypt-Keeper Bernie Sanders, back from the dead and still complaining that the primary was stolen from him. Scratch the Smell-O-Vision card for a whiff of all the Free Crap Bernie wants to give away!

Hang on, what did Bernie do? Other than bear a passing resemblance to the Cryptkeeper?

From the group's website, this looks to be a parody of the 1988 John Carpenter classic They Live, starring Rowdy Roddy Piper as a sunglasses-wearing protagonist who can see the secret subliminal messages that the rest of the world cannot. OK, fine, that works. What else ya got?

Both neatly represented here, from the official website's "gallery of horror":

The Bigfoot tie-in seems to come from the site's assertion that "more people believe in Bigfoot than believe Hillary Clinton." There's a link to "read more" about this claim, but it does not work. What else?


* Witness Hillary in her most despicable role - as "The Butcher of Benghazi!"

That must be this one:


* Join the revolution and fight The Web of Evil - take back control of Hillary's private e-mail server, shut down the Clinton Foundation "pay for play" scandal!

Sorry, even in a haunted house setting you cannot make emails seem scary, exciting, or anything other than boring as fuck. Not for a lack of trying....:

Malfeasance has never been so spine-tingling!

What else ya got?


And when you emerge from Hillary's House of Horrors, be sure to visit the Official Gift Shop where you'll find the highest quality branded t-shirts, hats, campaign buttons, flags, and much, much more!

Oh, you got a bunch of bullshit to sell! The official website has a "shop" section that presumably would display some of these wares — if it worked. (It doesn't.)

....And that's it. That's the whole press release. Underwhelming, it would seem, but time will tell if the sideshow is a hit.

It should, at least, explain what the hell this one is about:

Get your tickets here ... if you dare.