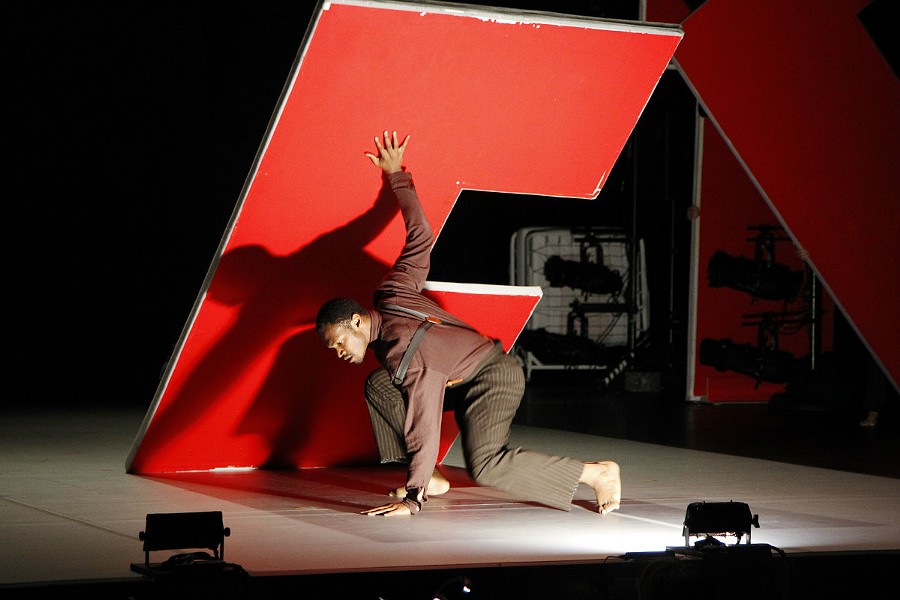 Imagine it's 1939. You're 19 years old. World War II breaks out, and you find yourself moving from your home in Belgium to the south of France. You're invited to study in a social work program there, but on the first day of class the government decides that Jewish girls like you can no longer have that profession. You end up working in an internment camp, supplementing nutrition for political refugees — and eventually, working to help imprisoned children get fake IDs and other means of escape.

The scenario sounds like something out of a Hollywood blockbuster or historical fiction. But for 96-year-old Dora Amelan, it was real life — and this weekend, New York City-based Bill T. Jones / Arnie Zane Company is bringing her story to life on the Touhill stage with a modern dance piece titled Analogy/Dora: Tramontane.

Amelan's story isn't one that the company found in a history textbooks — she is Bill T. Jones' mother-in-law. This weekend's show is based on an oral history the Tony Award-winning choreographer conducted with her in 2002. Associate Artistic Director Janet Wong explains that Amelan didn't talk about her life during the war.

"She would talk about everything, her nursing years, how she met her husband, their travels, so on and so forth, but that period, she hardly ever talked about to her sons," Wong says. So Jones approached her about putting her story on record — and in 2015, it premiered as the framework for this dance piece.

The dance company broke Amelan's story into episodes to serve as the foundation for the piece's choreography, music and spoken word. The work parallels Amelan's early years in Belgium, her mother's death as the Germans were marching into Belgium and her time working in the internment camps. But don't arrive at the theater thinking you've come to see a play.

"We love abstraction and we are formalists at heart, so you will not see a lot of scenes, like in theater how you would reenact a scene," Wong says. "So you will see that through sometimes a very supportive arrangement of the bodies in space, and sometimes it’s maybe it’s almost the opposite of what you’re hearing."

Except for the very beginning, the recorded interviews aren't played during the show. Rather than giving you a literal picture of each episode, the company aims to give you the feeling behind the situation.

"It’s mostly an abstract piece I would say, in terms of choreography," Wong says. "And all the dancers take turns speaking the part of Dora or Bill."

Overall, Wong says it's the story of Amelan's courage, and how her choices affected everyone's lives around her.

"I think her story can be understood by not just a Jewish woman but by everyone. As you can tell, probably, I admire her greatly," Wong says. "She, at age nineteen, even before the war began, she decided there are two kinds of people: one kind that needs help, the second kind is the people who give help. She decided at age nineteen that she would be the second kind."
Analogy/Dora: Tramontane is the first in a three-part series known as the Analogy Trilogy. The second piece, Analogy/Lance: Pretty aka The Escape Artist, debuted this year and chronicles an oral history that Jones held with his nephew. The third part, which will debut next year, is inspired by Ambrose, a character in The Emigrants by W.G. Sebald.

“I secretly hope that it encourages people to do the right thing at the right time and not wait and not do the easy thing," Wong says of the performance. "That’s my secret hope.”

You can see Bill T. Jones/Arnie Zane Company in Analogy/Dora: Tramontane this Friday and Saturday at 8 p.m. at the Touhill Performing Arts Center. For tickets and more information, call Dance St. Louis at 314-534-6622, or visit dancestlouis.org.

Check out the Analogy/Dora: Tramontane trailer below.