Fall is here, and the weather is suddenly wonderful. Why not spend this weekend doing something different?

Shop truly local at the Best of Missouri Market at the Missouri Botanical Garden. See a dance performance based on a Holocaust survivor's story at the Touhill. Or check out Mr. Midwest Leather contest at JJ's Clubhouse in the Grove. You can't go wrong unless you waste the whole thing on your couch. Get moving!

Here are our top picks for the weekend.

1. See an intriguing play
Before there were actual buildings with the express purpose of putting on plays for entertainment purposes, theater had a ritual component. People would gather to celebrate a religious or holy occasion by donning masks, wearing ceremonial clothes and taking on a well-defined persona in order to act out the story that made spring arrive, or kept the seas calm for the fishing season, or any of a number of vital reasons. Theater was what kept the world spinning in those days. Harvey Schmidt and Tom Jones (creators of The Fantasticks and I Do! I Do!) wanted to return theater to its original, magical state. They devised the musical Celebration as a union of ritual theater and street theater. It tells the story of the naive young man Orphan, who meets and charms the old millionaire William Rosebud Rich at a New Year's Eve party. Also there is the beautiful, fame-hungry erotic dancer Angela, and the jaded old crank Potemkin. Together these people will either ring in the new year and recreate the world, or they will fail and the world will grind to a halt. New Line Theatre opens its new season with the premiere performance of Tom Jones' revised version of Celebration. Performances take place at 8 p.m. Thursday through Saturday (September 29 to October 22) at the Marcelle Theater (3310 Samuel Shepard Drive; www.newlinetheatre.com). Tickets are $15 to $25.


2. See the West End Players Guild season kickoff
Tom Stoppard's play Arcadia is about mathematics, thermodynamics, determinism, Lord Byron, "the carnal embrace" and hermits. It's a lot to ask of a play to link those concepts and people together, so Stoppard uses human beings as channels for the ideas. Set simultaneously in 1809 and the present, Arcadia presents the inhabitants of a country home in both time frames. In the nineteenth century Thomasina Coverly is a teenager with an intuitive grasp of math, nature and physics. Her learned tutor Septimus is her confidant and verbal sparring partner. In the present we have a group of academics whose lines of research converge on the Coverly house. All characters and time lines eventually meet, in ways neither party is aware of. West End Players Guild opens its 106th season with Arcadia. The play is performed at 8 p.m. Thursday through Saturday and at 2 p.m. Sunday (September 30 to October 9) at the Union Avenue Christian Church (733 North Union Boulevard; www.westendplayers.org). Tickets are $20 to $25.


3. See a dance performance at the Touhill
Dancer and choreographer Bill T. Jones has won Tony Awards, a MacArthur Genius Award and the Kennedy Center Honors. This week during his visit to St. Louis he'll receive the Washington University 2016 International Humanities Medal for his lifetime of work in the arts — and then the next day he gets back to that work with Analogy/Dora: Tramontane at the Touhill Performing Arts Center on the University of Missouri-St. Louis campus (1 University Drive at Natural Bridge Road; www.touhill.org). The piece is based on an interview Jones conducted with Dora Amelan, a French Jewish woman who survived World War II while working for a Jewish underground group. Amelan's life is relived by the dancers, who recreate the key moments in her life through movement, speech and song. Analogy/Dora: Tramontane is performed at 8 p.m. Friday and Saturday (September 30 and October 1). Tickets are $30 to $50. 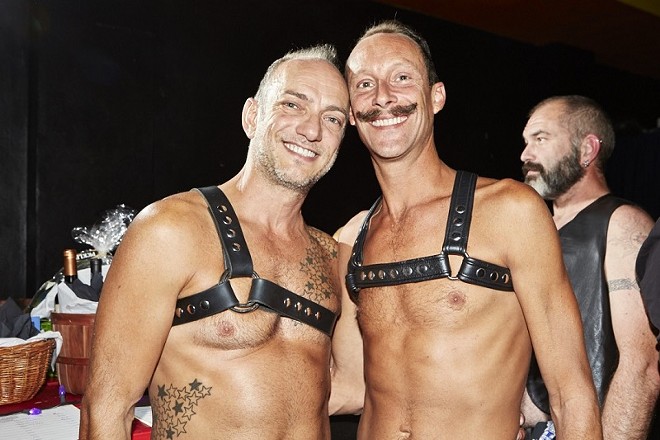 4. See some hot dudes in leather in the Grove
Midwest Leather Weekend gives St. Louis' leather community the opportunity to come together and celebrate the leather lifestyle. There are dinners and brunches, seminars on rope play and flogging, and even a leather fashion show that showcases the creations of Jerry Miller. But the big draw is the Mr. Midwest Leather contest. Potential winners must be able to be comfortable wearing leather and representing the local community, both visually and verbally. This year's Mr. Leather Contest takes place at 11 p.m. Saturday, October 1, at JJ's Clubhouse (3858 Market Street; www.midwestleatherweekend.com). Admission is $10.


5. Visit a sci fi and fantasy convention
Archon is St. Louis' longest-running science fiction and fantasy convention. When it started 40 years ago, the guest of honor was George R.R. Martin, who was then best-known for his science fiction short stories. How times have changed. GRRM is still slogging his way through A Song of Ice and Fire, while Archon still produces a new convention every fall like clockwork. This year's Archon takes place Friday through Sunday (September 30 to October 2) at the Gateway Center (1 Gateway Drive, Collinsville, Illinois; www.archonstl.org). The first panel starts at noon on Friday and the last gaming session ends at 5 p.m. Sunday. In between those two points in time will come cosplay, filking (songs about science fiction/fantasy performed by the fans) and three days worth of panel discussions and seminars on everything from the legacy of Star Trek to cosplay disasters. Single-day admission to Archon is $8 to $45, and weekend passes good for all three days are $75.


6. Shop local at MoBOT
This year marks the 25th anniversary of the Best of Missouri Market, your one-stop shop for goods and produce made (and grown) in-state. You'll find local favorites such as Merb's Candies and Baetje Farms (purveyors of fine goat cheese), as well as new favorites like Across the Board Game (handcrafters of traditional wooden board games) and Ste. Genevieve's ASL Pewter (the husband-and-wife firm made much of the pewterware for HBO's John Adams series). There will of course be food available, as well as live music by Paul Nixon, the Dust Covers and Three of a Perfect Pair. The Best of Missouri Market is open from 6 to 9 p.m. Friday and 9 a.m. to 5 p.m. Saturday and Sunday (September 30 to October 2) at the Missouri Botanical Garden (4344 Shaw Boulevard; www.mobot.org). Admission is $5 to $12.


7. See a musical at the Fox
Neil Young, who is as wise as he is grizzled, once sang that "only love can break your heart." The musical Once bears him out. An Irish busker is on the verge of giving up music after a painful break-up, but a Czech girl convinces him he needs to keep at it. Together "guy" and "girl" (no names are given) work on new songs and slowly put together a band. The hope is that the guy will get a recording contract and move to New York in pursuit of his lost girlfriend, but instead he and the girl find themselves romantically drawn toward each other. Once earned eight Tony awards for its delicate love story and catchy songs, which were written by Markéta Irglová and Glen Hansard. The musical returns to town for a short run this weekend. Performances take place at 7:30 p.m. Friday, 2 and 7:30 p.m. Saturday, and 1 and 6:30 p.m. Sunday (September 30 to October 2) at the Fox Theatre (527 North Grand Boulevard; www.fabulousfox.com). Tickets are $30 to $95.