Move Over, Pokemon — Ingress Is Coming to Town 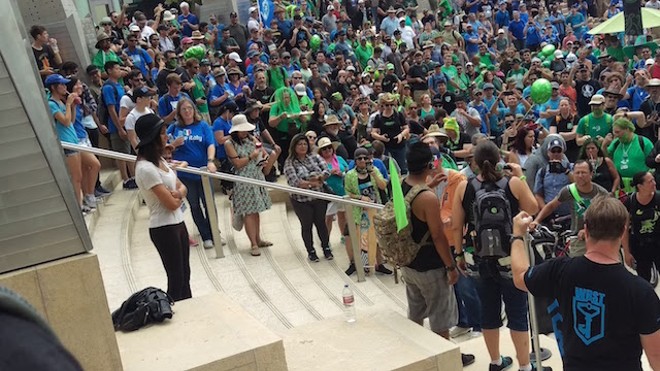 If you thought the Pokemon Go hordes were overwhelming, wait until you get a load of the people playing Ingress.

This Saturday, as many as 1,000 players of the app-based science fiction game could be swarming St. Louis, says Brent Johnson, a member of the one of the teams in hot pursuit of an Ingress victory. As with Pokemon Go, they’ll be using their smartphones on an “augmented reality” model — joining teams and traveling to real-life territory to capture territory.

Ingress is actually the first creation of Niantic, the company behind Pokemon Go. Players join one of two factions, striving either to prevent alien energies from entering the world through portals in real-world locations or fighting to allow them to continue enlightening humanity. It’s a very social game, and much more complicated than Pokemon Go.

St. Louis is one of the locations of an upcoming Ingress event called an “anomaly,” in which players from all around the world gather to compete for control of the city.

The primary site of this anomaly is Toronto, Canada, but more people have actually signed up to play in St. Louis, a “satellite” site, Johnson says.

Johnson is a member of Enlightened Anomaly Team St. Louis, which is organizing events and gameplay for one of the game’s two teams. Johnson is hoping to gather 500 Team Enlightened players for the anomaly, and the Resistance team could have just as many.

Johnson started playing Ingress three years ago, when the game had just been released. He says it offers a very different experience from other video games and apps.

“It’s a very social thing, even on a day-to-day basis,” Johnson says. “There’s only so much that you can accomplish by yourself.”

That’s especially true of the lead-up to an anomaly, which requires defensive playing by distributing “keys” to different locations. These can be used remotely, so players who can’t travel to St. Louis can still get involved.

“Even though these are virtual things, they have to be physically handed off from person to person,” Johnson says. “Keys to St. Louis portals are all over the country and all over the world.”

The in-game event will be accompanied by a convention atmosphere of swag, souvenirs and parties. It can be a workout, too; some Ingress players get intense about the game’s physical aspects through a tie-in with the endurance-training company GORUCK.

“You spend hours with a 20-pound weight on your back and they put you through kind of military training,” Johnson says.

But the game is as physical as you want it to be — other players primarily get around in their cars.

While an anomaly can be overwhelming for new players, Johnson says it’s a good way for beginners to find more experienced members of the Ingress community to play with.

“It’s a good way to meet people and start getting involved,” Johnson says.

The main event occurs on Saturday, beginning with a meeting in Serra Sculpture Park in the Downtown West neighborhood. Players can also sign up for additional missions that take place in locations like the Loop and Forest Park on Sunday. Registration isn’t required, but players can officially sign up at vialuxstlouis.splashthat.com.

As for the rest of you, look out. The invasion is coming.