A Third Trump Piñata is Getting Wrecked on Cherokee Street Tonight 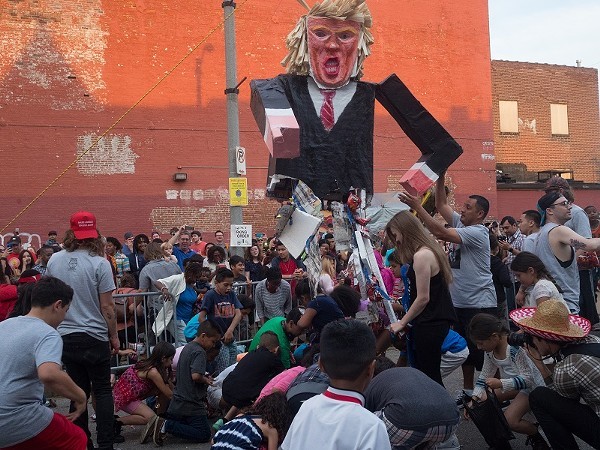 If you still haven't fulfilled your inner fantasy of taking a swing at Donald Trump, this is your lucky day.

Tonight at 6 p.m. at Yaquis (2728 Cherokee, 314-400-7712), a "bigger and better" Trump piñata will make its debut as the finale of Cherokee Street's Mexican Independence Day Celebration. Towering at 15 feet, "El Trumpo" will be filled with toys, art, candy, balloons and family-friendly prizes.

It's no secret that Trump has made some infamously negative statements about Mexican, Hispanic, African American and Native American people, which is why Yaquis owner Francis Rodriguez felt that Mexican Independence Day would be the perfect platform for literally beating Trump.

“This is our political statement," Rodriguez stated in press release, repeating his earlier explanation for the El Trumpo events. “I see Donald Trump as a dangerous character. We are trying to get people to think about him and about what he really stands for. We don’t have much power in the greater society versus those like Donald Trump who dominate the airwaves. Therefore, the only weapon we have is ridicule. We are making fun of El Trumpo. This event is meant to be an inclusive event for the entire family!”

This evening's Trump thumping will cap off what has already been a raucous
weekend of celebration at Yaquis, which hosted the victory party for
Bruce Franks on Friday night.

It also marks a bit of an anniversary for the piñata, as Rodriguez's first-ever El Trumpo was made for last year's Mexican Independence Day celebration. Rodriguez and a few local artists spent a week in the Yaquis basement in August 2015 creating the 9-foot, candy-filled Trump. It's also when the catchy tagline "El Trumpo Takes a Thumpo" was born.

In May, the second generation Trump piñata was conceived for Cherokee Street's Cinco de Mayo celebration. It towered over its predassesor at 15 feet and was completely made out of old RFT papers. This piñata got the royal treatment, too, sitting on a golden throne at Rodriguez's restaurant until its appearance in the Cinco de Mayo parade and its final destruction that night.

"In Central America its just a thing that you do," he'd explained at that piñata's unveiling in April. "If someone is bedeviling you, you build an effigy of them and knock a hole in them, and the candy spills out. It's really that simple sometimes. You shouldn't over-think it; you certainly shouldn't lose your mind."

About 2000 people are estimated to be at tonight's event, which means plenty of people to help bash El Trumpo III to bits. Until then, enjoy these photos and this video from the piñata festivities at Cinco de Mayo.