Get ready for your close-up, St. Louis.

Tonight at 8 p.m., St. Louis will take the spotlight in the third episode of Abandoned, a new TV series hosted by professional skateboarder Rick McCrank on VICELAND. The series follows the Vancouver resident as he explores long-vacant properties, unearthing the people and stories behind them. So far the show has covered abandoned shopping malls in Ohio and abandoned fishing villages in Newfoundland, Canada.

In tonight's episode, however, he takes on a completely new subject: St. Louis' abandoned schools.

"Our episode of St. Louis, we look at the abandoned schools of St. Louis and talk about why and how that happened, and how it affects the people of St. Louis," McCrank explains. Everything from the mass exodus to the suburbs to the Delmar Divide gets a look, with footage of the buildings interwoven with interviews with various St. Louisans.

The five-person crew arrived in St. Louis in December 2015, trekking through empty buildings including Old Central, Grover Cleveland High School and Turner Middle School in addition to an active school.

While they explored all over, they placed significant emphasis on north St. Louis.

"A lot of people have told us, you know, 'North St. Louis is sketchy, dangerous, terrible, don't go there.' And there's a number of people, and they'd never even gone there. They were like, 'I've never been there, but...'. And then we went, and that's where we met the most amazing people and had the greatest time," McCrank says. "What we try to do with the show is to maybe enlighten people and let them know that the other end of town that they think is sketchy is also just a normal place that has normal people that are your neighbors, and you should maybe go visit them and say hi."

Venturing through places that might seem forboding is nothing new to McCrank.

"Through my whole life I've been visiting places like this to skateboard in them, or at them," says McCrank, who has been skateboarding since age eleven. "As skateboarders we're drawn to these sort of lost places that in a lot of ways are being unused and underappreciated."

And although St. Louis residents may already be familiar with this episode's abandoned places, McCrank says locals should still watch the episode to get an outsider's perspective of St. Louis. He says he was surprised by the segregation in St. Louis — right down to "the St. Louis question" of where you went to high school. "That's another form of segregation, you know what I mean?"

Judging someone by their high school really pigeonholes them, he says.

"To me that's too bad, because that doesn't say anything about you as a person."

Despite the heavy topics, McCrank stresses that the show tries to present negative subjects with a positive vibe and find the humanity in every episode. In fact, St. Louis was the entire crew's favorite city when filming this first season.

"We just met some really great, great people, and had a really great time. I feel like the city has a really great energy. We went to the City Museum and that was just fantastic, and we ate really good food. My favorite restaurant is there."

He later adds, "I don't know, there's just an energy there that we all really like. All of us were like, 'We really love St. Louis.' It was really cool. I'm surprised that a lot of people don't know that."

For more information about Abandoned, visit viceland.com or tune in tonight. See more photos from the St. Louis episode below. 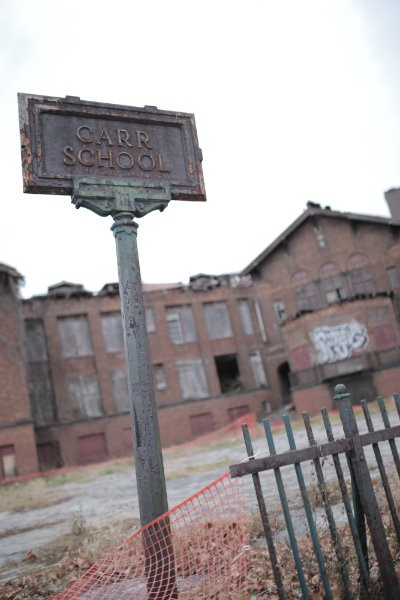