The Coolest Flag Ever Is Sitting in a Delmar Parking Lot

Looking for a place to express your feelings about America? There's a giant, steel flag for that — and it's currently sitting in a Delmar Loop parking lot, right between Chipotle and the Tivoli Theatre.

Ira Hill, an artist based in Birmingham, Alabama, is traveling across the country, towing his traveling art exhibition on the back of his white pickup truck wherever he goes. Titled "American Expressions," this flag tours from city to city. In each new major city, Hill gives one side a fresh coat of red, white and blue paint. People are then encouraged to write their thoughts on it in any medium they choose. The other side is reserved for artists to paint along the way — it currently sports an image of the Statue of Liberty.

Hill started his cross-country trip on July 4 in Birmingham. He arrived in the St. Louis area yesterday, parking the flag at St. Louis Community College's Florissant Valley campus  — and now everything from "Fuck Trump!" to "Love is Worth the Fight" can be seen on the flag.

It is sitting in the Loop today, and it will be in the parking lot across from the City Museum tomorrow before heading to its next stop in Paducah, Kentucky. The final stop is scheduled for November 8 — Election Day — in New Orleans.

This is the second time Hill has traveled with this work of art. The flag made its first tour in 2011.

"I got tired of listening to people complain. I got tired of listening to myself complain, and thought, 'What am I going to do about this?'" Hill explains. "Essentially, as a sculptor and an artist, artists have idealism in their toolkit. Unlike many professions, we get to point at things that are higher and maybe fictional or unattainable, and we can help people try to strive for those things." So Hill gave them a place to complain.

"Part of it is empowering people with a pen; the other is like letting them vent. It's kind of like art therapy on a national level. Get out the poison; let it go. You know, we can work together. At least that's the hope," Hill says.

Reactions to American Expressions vary by location and demographic — community colleges are often more receptive than large universities, for example, and Hill received different responses in the South than the East Coast. He listens to lots of stories at each stop; the flag can be a conversation starter for people who don't often talk about taboo topics like politics.

He points out one of the notations added yesterday, which reads, "This flag is a joke." "The gal who wanted it just stood there frowning. And so I was like, 'What's the problem? What's going on?'" Hills says. She told him she had so much to say — so he suggested she tell him about it.

"She goes on and on about the inequality and this and that and all this stuff, and she gets to the end and says, 'This flag is a joke.' And I'm like, 'Here's a pen. Write that.'"

It can be difficult to get people to open up and talk about such heavy subjects — the flag gets about 30 percent of onlookers to participate in any given spot. But Hill doesn't pressure passersby to contribute. He says it's about approaching people with respect, courtesy and compassion.

The flag originally came into being thanks to a Kickstarter campaign, and Hill's trip is self-funded. You can also contribute to the cause through American Expressions' GoFundMe page. Eventually, Hill wants to turn American Expressions into a more permanent gallery or museum piece.

In the meantime, you can find markers ready and waiting by the flag during its time in St. Louis. You're welcome to write on it even when Hill isn't there.

Ultimately, Hill hopes the flag will make you feel like your voice matters.

"I get to listen to a whole spectrum of complaints, and I say, 'Well, we're a democratically elected republic. Who do you have to blame? It's on us.'" 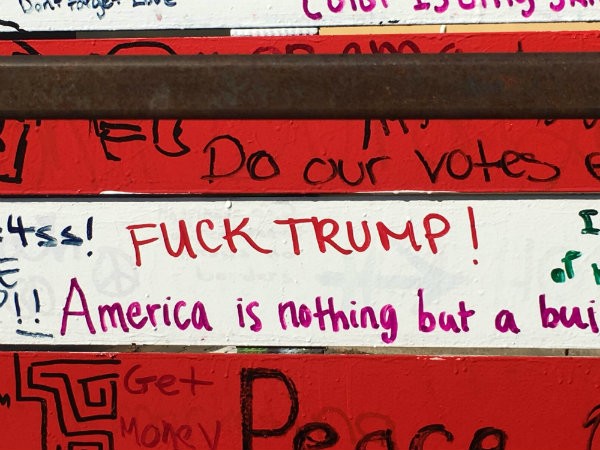