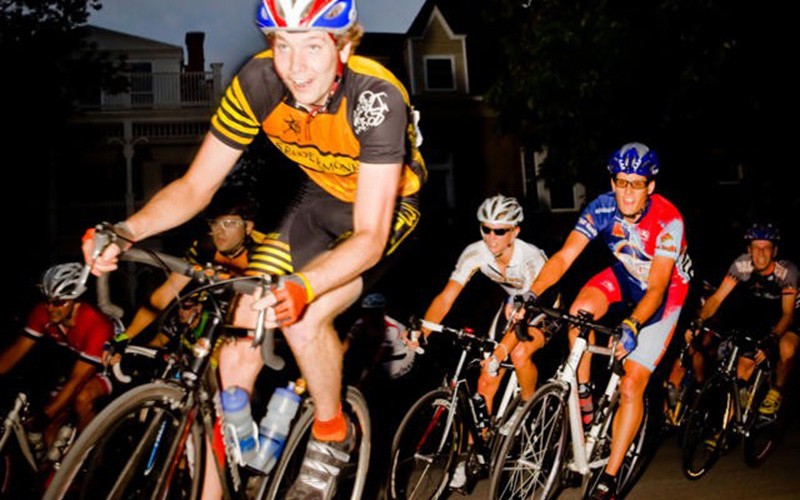 Finally: a three-day weekend, and one where St. Louis is expecting some glorious weather. Time to get out of the house and celebrate all the city has to offer.

This week's picks run the gamut — from an amazing series of bicycle races taking place at various times in four different city neighborhoods to festivals celebrating the cultures of Greece and Japan. More into theater than hordes of revelers? There's a Lin-Manuel Miranda play making its St. Louis premiere this weekend. Perhaps you've heard of the guy?

1. Feel the rush at the Gateway Cup
If it's Labor Day weekend (and it is), that means professional cyclists are competing for the Gateway Cup (and they will be). The Staenberg Gateway Cup features cyclists whizzing through four St. Louis neighborhoods across four days (Friday through Sunday, September 2 to 5). The opening race is the Tour de Lafayette, the only nighttime criterium in the series. The course requires the riders to navigate four 90-degree turns around Lafayette Square (Park and Mississippi avenues; www.gatewaycup.com). Keep in mind that when the men's and women's pro divisions are doing that, there will be as many as 150 racers trying to take those turns at speed. Juniors division racing starts at 3 p.m. on Friday, with the pros starting at 8:15 p.m. (women) and 9:15 p.m. (men). Saturday's race is the Tour de Francis Park, Sunday's is the Giro Della Montagna on the Hill, and the final race is the Benton Park Classic. Admission is free for spectators.


2. Enjoy First Friday at the science center
It's been 50 years since the starship Enterprise embarked on its never-ending mission, which doesn't even include the time dilation brought about by all that warp speed travel. The Saint Louis Science Center (5050 Oakland Avenue; www.slsc.org) celebrates five decades of trekkin' with First Friday: Star Trek Friday from 6 p.m. to midnight. You can (and should) meet astronaut Dr. Tom Jones, who will talk about what living and working in space is really like, take pictures with some Star Trek cosplayers, debate whether Data from Star Trek: The Next Generation is a person with UMSL's Technology Learning Center (they have robots to help you decide) and catch episodes of Star Trek (original Kirk flavor or new style Star Trek Picard) in the Omnimax Theater. There will also be a free screening of Star Trek (2009) at 10 p.m. Admission is free, but some activities require a small fee.


3. See a great action film at the Tivoli
Hayao Miyazaki's Princess Mononoke is one of the greatest action films ever made. Ashitaka is a young warrior who attempts to save his village from the depredations of an enraged boar god, only to learn too late that the boar god has been corrupted by an evil force. The force gets its claws in Ashitaka as well, and he journeys west to either find a cure or die in battle. Instead he finds San, a warrior princess who pals around with two supernatural wolves while attempting to destroy Iron Town, which pumps out pollution around the clock. But does Iron Town and its power-hungry ruler Lady Eboshi need destroying — or does it need to find a way to live in balance with nature? Princess Mononoke is a parable about the damage humanity has done to the natural world, but one with several thrilling battles and an engaging pair of heroes. And just wait until you see the Forest Spirit. Princess Mononoke is shown as part of the Reel Late series at midnight Friday and Saturday (September 2 and 3) at the Landmark Tivoli Theatre (6350 Delmar Boulevard, University City; www.landmarktheatres.com). Tickets are $8.

4. Celebrate Japan at MoBOT
The Missouri Botanical Garden's Japanese Festival celebrates its 40th anniversary this year with some new additions. Luck Eisa is a dance troupe that specializes in the Okinawan folk dance style eisa, which is performed by young people dressed in colorful outfits and wielding three types of drums. Also making its St. Louis debut this year is Samurai Sword Soul, a theater company that specializes in tate, which is Japanese sword stage fighting. Tate blends real martial arts with theatrical embellishment to create a dramatic form of highly choreographed combat. Both groups perform all three days of the festival, which takes place from 10 a.m. to 8 p.m. Saturday and Sunday and 10 a.m. to 5 p.m. Monday (September 3 to 5) at the Missouri Botanical Garden (4344 Shaw Boulevard; www.mobot.org). Admission is $5 to $15.
MONDAY

5. ... or Greece in the Central West End
The joy of grilling throughout a three-day weekend fades a little by by the end of day two. The heat starts to get to you just about the same time somebody's girlfriend shows up with a portobello mushroom and a bowl of marinade. Take that third day off and head to the St. Nicholas Greek Festival, where the cooking is done for you. Now in its 99th year, the St. Nicholas Greek Festival offers Olympian amounts of food and drink as well as Greek dancing, music and tours of the historic St. Nicholas Greek Orthodox Church (4967 Forest Park Avenue; www.opastl.com). This year's festival is open from 11 a.m. to 9 p.m. Friday to Sunday and 11 a.m. to 8 p.m. Monday (September 2 to 5). Admission is free and so is the parking in the nearby BJC garage.


6. Catch a play by that Miranda guy you've been hearing about
If news of Hamilton coming to St. Louis has you aching for a little of that Lin-Manuel Miranda magic, you can get an early fix at the start of September, courtesy of R-S Theatrics. The company opens its season with Love? Actually ... An Evening of Musical One-Acts. The first show is the audience-controlled "Out of A Bowl," and the second is Steven Serpa's short opera "Thyrsis & Amaranth," based on the La Fontaine fable of the same name, about young shepherds in love. The finale is Miranda's "21 Chump Street," a musical about a high school student infatuated with the new kid at school — who is actually an undercover cop. You may have heard both the musical and the real-life story that inspired it on This American Life, but now you can hear and see it live and in person. Love? Actually... is performed at 8 p.m. Friday and Saturday and at 7 p.m. Sunday (September 2 to 18) at the Westport Playhouse (635 Westport Plaza, Maryland Heights; www.r-stheatrics.com). Tickets are $15 to $25.