Colin Jost is Returning to St. Louis to Laugh for Hunger 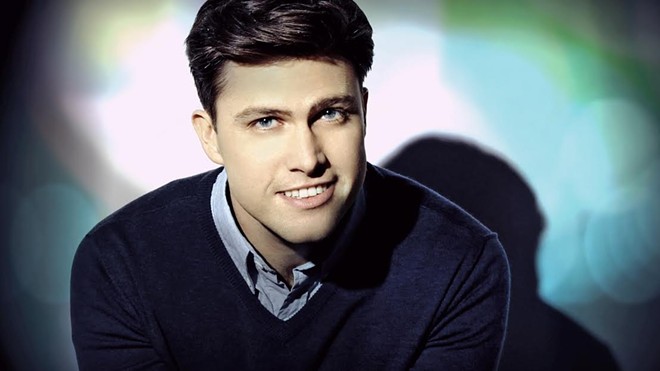 "I was staying the night there while I was going to Kirksville to do a show at Truman State," the Saturday Night Live writer recalls. "I was driving through, and my car was on empty and ran out of gas, which it frequently does because I'm not a particularly responsible person. Anyways, I have to pull over on the side of the road, and right where my car dies is in front of a sign that reads 'Welcome to Ferguson, MO.' This was right after everything had happened too, so I just didn't even know how to react — it was so unreal."

So unreal, Jost apparently drove off in a near-daze. "I had AAA bring me a gallon of gas, and then I almost ran out again 40 minutes down the road when I forgot to fill up a second time," he says.

Fortunately for Jost, this time he won't have to travel quite so far after touching down at Lambert. The Weekend Update news anchor will be headlining St. Louis Area Foodbank's "Hunger is No Joke" event this Saturday at The Pageant.

For Jost, it's a chance to perform his stand-up for a cause bigger than just himself.

"It's for a great charity and, ya know, a good reason for people to come out for comedy," he says.

Jost's stand-up routine differs from what you see him talk about on Saturday nights.

And yes, that means the presidential election: "I think it's impossible to be a comedian and not talk about Donald Trump right now."

While he's here, Jost is looking to experience the best that St. Louis has to offer.

One place you won't find him? A Cards game. The Staten Island native, predictably, is a career Mets fan.

"I'm still not quite over that 2006 National Championships Series between us, so I don't know if you'll see me at Busch Stadium," he says. "I'll check out the Arch, though."

The doors for "Hunger is No Joke" open at 7 and the show starts at 8. All proceeds benefit the St. Louis Area Foodbank; see their website for ticket information.