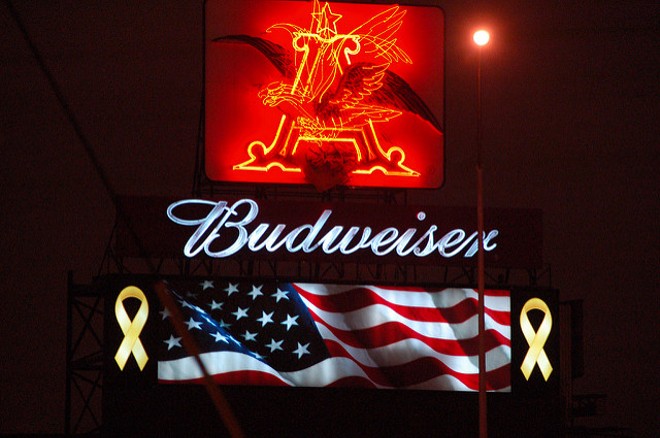 St. Louis: A city of unique people with a rich culture that you can't find anywhere else. And while transplants can blend in easily enough, certain things separate the people who grew up here from everyone else — and we're not just talking about where you went to high school.

You may not stand out as a native on first glance. But these ten signs should be considered dead giveaways.

10. You own some form Blues, Cardinals, or Rams merchandise — even if you don't like sports
Whether it's your parents trying to push their love of Cardinals baseball on you before you can even walk, or you just thought the blue note was a drawing of a weird bird on a shirt, you can find some rags supporting one of the three* pro teams of our city somewhere in your closet.

9. You've gone on a field trip to the Magic House and/or the City Museum Let other cities send their elementary school kids to science centers and art museums. Here in St. Louis our rites of passage were much cooler. After all, what other landmark that you visited with your grade school teachers do you now return to on a Friday night? (And no, we're not talking about the Magic House on that one...)

8. You instinctively know never to take Manchester Road under any circumstances
If there is any other possible way to get somewhere without traveling on the Road of Confusion, you take it, because you know all too well that the IQs of everyone around you drop a full 30 points when they turn on to that god-forsaken street.

7. You consider "hoosier" a major insult
It can have infinite meetings in any other city in America (chief among them, apparently, "a person from Indiana"), but a native St. Louisan will save the word "hoosier" for people who have tires sitting on their front lawn and send their five kids to school wearing the same clothes every day of the week.

6. You have a favorite sign, and it's the A-B flying eagle sign on westbound 64
The Arch may signify the Gateway to the West to outsiders, but that light-up Anheuser-Busch billboard means home to us.

5. You were always ready to spout your funniest joke on Halloween
"Trick or Treat" was a time for you test your chops at stand-up comedy, in the event that the household you were visiting asked for a joke before you could get a chocolate bar. This fun tradition would definitely get you a few strange looks if you were to try it in a different town.

4. You remember when the Scottrade Center was the Savvis Center, and maybe even the Kiel Center
A Snoop Dogg-style transformation has led this venue to change its name three times in the past 22 years. Much like Caitlyn Jenner, even as we will always remember the old names of the arena, we must now move forward and accept its new identity: Scottrade.


3. You have survived at least one cicada outbreak

Every 13 years the devil unleashes a million screaming banshees in the form of kamikaze pilot horseflies to terrorize St. Louis. The plague of cicadas is one of the most horrific times to be a St. Louisan; the screeching alone is a summer-ruining experience that you definitely don't forget.

2. You love — and we mean love — pork steak
This fatty cut of pig makes your heart sing. And though it's relatively unknown outside of the city, pork steaks are a serious subject to any true St. Louisan; some have even killed over it. If a friend breaks out some of those bad boys at barbecue, he or she is definitely from the best city this side of the Mississippi.

1. You don't just know what toasted ravioli are. You've actually eaten them
T-ravs are so popular here, they're like Yadi — instantly recognizable just by their nickname. And that's one reason this appetizer selection is a dead giveaway.

Let's face it: Nobody from anywhere other than St. Louis is going to jump at the chance to eat deep-fried pasta squares.