New Coloring Book Is What 'Self-Aware St. Louisans' Have Been Waiting For

Ryan Rich knows that not everyone is going to find his new coloring book funny. But that's OK; it's not for everyone. Colorful St. Louis is, as its subtitle proclaims, "the coloring book for the self-aware St. Louisan."

And so there are pages mocking the Ferguson Police. And Sunset Hills Mayor Mark Furrer, who famously plowed into a cyclist and just kept driving. And even Becky, Queen of Carpet, the local pitchwoman whose size fluctuated along with her namesake store's fortunes. It's all there in the slender new book, just ready for you to snicker out loud as you color it in.

A south county native, Rich graduated from Lindbergh High in 2015 and just turned twenty this week (happy birthday!). Soon to start his sophomore year at Virginia Commonwealth University's School of the Arts, he tells the RFT that he was in between jobs earlier this year when he sketched out the drawings for its 45 pages.

He'd been inspired by a fellow student's coloring book extolling the virtues of Richmond, Virginia. But for his project, he took a sardonic tone. "Growing up here, I'm perceptive of St. Louis pop culture," he says. "This city loves to hold onto its little quirks and brag about them. Because St. Louisans are so proud, I thought I'd play with that."

He submitted the illustrations to Amazon's Create Space since it had published his friend's book — and their acceptance led to what he calls a pretty sweet deal. They took care of the publishing and ship copies to anyone who orders them online in exchange for a share of the profits. The rest of those profits are his. And the split isn't bad; by selling just a few dozen copies via word of mouth after the book's July 27 release, he was able to recoup the money he otherwise could have made in the week he spent working on it.

"I figured if I could just get a full week's worth of salary, I'd be happy," he says. "And I've already done that."

After college, Rich figures he'll put his talents to use on more serious projects — a graphic design student, he figures he'll end up in advertising or marketing. But for now, he's enjoying the light-hearted poke at his hometown. And if you think the book is too mean-spirited, well, it could have been worse. "There's some stuff I held back on," he says. 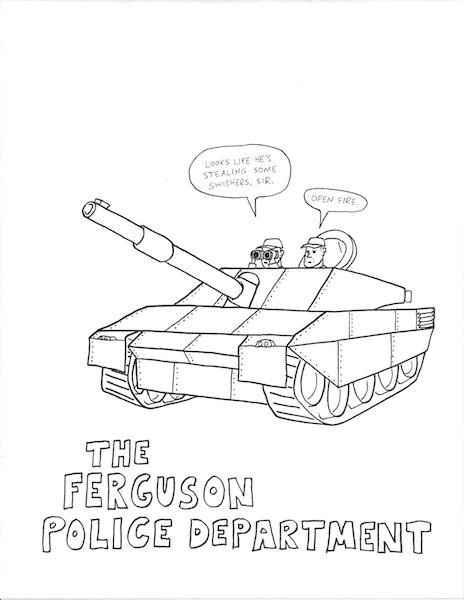 Turn the page for a few more sample pages from Colorful St. Louis, all courtesy of Ryan Rich.

To order a copy of Colorful St. Louis, visit its Amazon page.