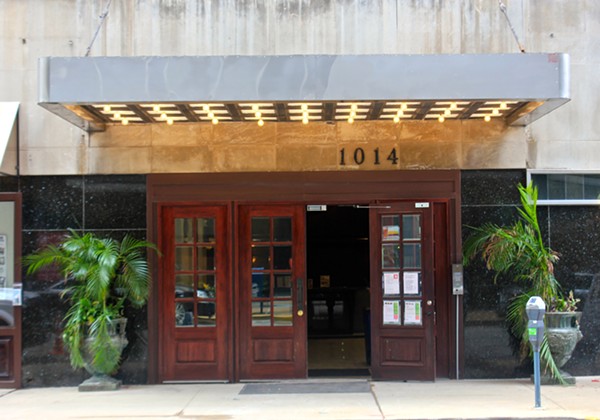 After nearly 30 years of vacancy, the downtown building that formerly housed the Hotel DeSoto is starting to take in guests again. Only this time they aren't checking in for the night — they're leasing from the brand-new (but still almost century-old) Gallery 1014 apartments.

That required an extensive remodel.

“The idea behind the building was to work with the historic charm, but also to create something that’s totally different and unique to St. Louis,” says Jennie Hampel, assistant of operations for the apartment complex.

Located at 1014 Locust Street, Gallery 1014 has quite the history. It started out as the City Club, a municipal social club that met and debated public issues, almost 100 years ago. After the club closed, it became the Hotel DeSoto, followed by the Alverne Hotel. Shuttered in the 1980s, the building has been vacant ever since, representing a big challenge for any developer daring to take it on.

Enter Brian Hayden. A well-known developer around St. Louis, Hayden has shown a knack for rehabbing old buildings into luxury apartments. A few of his past projects include renovating and adding apartments to the Laclede Gas Building and the Millennium Center.

In 2014 he began this project, creating a plan that would revamp the space without completely stripping away its historic atmosphere.

One of the biggest challenges was, surprisingly, the windows. Each was incredibly small, letting in minimal amounts of natural light. To address this, Hayden took groups of four windows and turned them into one large, two-story arch window. “The window alterations are a big part of the character of that era,” Hampel says. “Plus, it also brings a modern spin to the building.”

This vision for the windows is representative of the building as a whole: a fresh take on a previous time period. While the whole space has been redone for the present day, little touches honor 1014 Locust’s history. In fact, the Hotel DeSoto of the early 1950s was a huge influence in revamping the building. Hayden decided to keep the hotel's grand ballroom and theatre intact, rooms that will be used as event spaces in the future. The building also features glorious Art Deco chandeliers.

Those historic touches aren't the only ornamentation, though. Hayden incorporates his mother and father's artwork throughout all six Gallery buildings around St. Louis. The building hallways are lined with more than 400 pieces of his parents' art.

“It’s my first experience with someone taking a piece of who they are and placing that into a real estate development project,” Hampel says.

This little touch gives the complex even more of a homey feel. Each painter’s style is distinctive, with his father’s work being more monochrome and his mother’s bursting with color.

The pet-friendly apartment building hosts 81 apartments ranging from one to three bedrooms. They'll rent for $1,225-$2,295 a month depending on the floor plan. This will include parking (for now) as well as a rooftop pool and pet park, all of which will be completed in the next few weeks.

Turn the page for a sneak peek at the building. 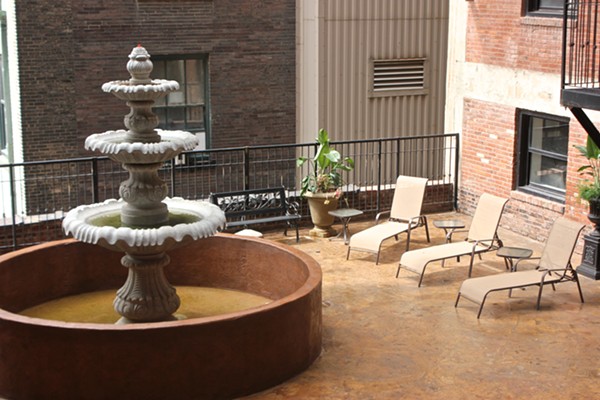