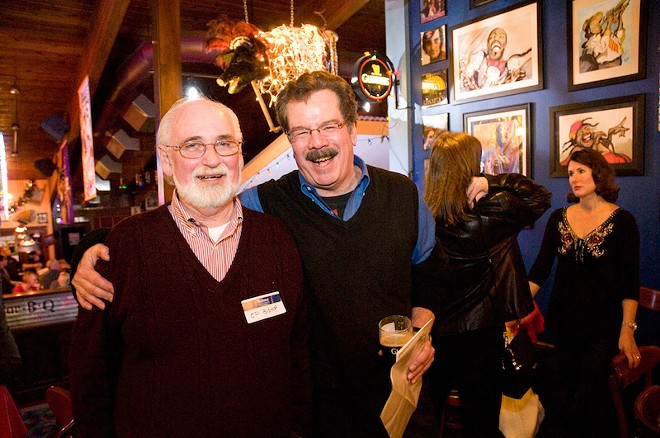 Ed Bishop, a journalism professor at Webster University who taught scores of students over 22 years after several years as managing editor of the Riverfront Times, has died at the age of 71. The RFT has learned he died at home on Monday of natural causes.

Known for “bloodbath” edits as much as for lending an ear to students seeking advice, often while pulling a drag from a cigarette between classes, he was remembered as a “hard-nosed purist” and a teacher who practiced tough love on incoming freshmen and seasoned journalists alike, long after they left had the leafy campus in Webster Groves.

“He was an unapologetic truth-teller, as another friend recently put it,” says former student Adam Linhardt, now a reporter whose penchant for fishing landed him at the Key West Citizen.

Don Corrigan, a longtime colleague and co-founder of the Webster-Kirkwood Times, worked closely with Bishop over the decades and witnessed his share of confrontations. Corrigan recalls the time a professor from a Christian university held a crucifix to Bishop's face, after Bishop characterized that school’s student newspaper as “public relations for fundamentalists.”

Of that memorable dust-up, which happened during a student journalism conference at the Lake of the Ozarks, Corrigan recalls, "She was telling him how he was praying for his soul. I thought the devil might come out of the floor before it was all over with. It was a classic Ed confrontation.”

“There’s going to be a void for sure,” Corrigan adds.

Before he was hired in 1994 as an adjunct professor at Webster, Bishop was managing editor of the Riverfront Times during one of the paper’s “feistiest” eras, the late ‘80s, says Ray Hartmann, who founded the RFT in 1977. Bishop was also also a staff writer and media critic.

“He was a very passionate, principled, independent journalist, and always stayed true to that,” Hartmann says, adding that Bishop was “was allergic to commercial considerations.”

Echoing that sentiment is Larry Levin, now publisher of the St. Louis Jewish Light, who worked with Bishop at the RFT: “He was without doubt an old-school journalist, an iconoclastic character,” Levin says. “If he feared anyone or anything, he certainly didn’t show it. He was willing to stir things up but often kept things at a simmer rather than a boil; the implication that the heat might be turned up was more common than the actual twisting of the dial. But you could always see it in his eyes.”

After leaving the RFT, Bishop brought that independent spirit to the St. Louis Journalism Review, a quarterly media watchdog that later controversially morphed into the Gateway Journalism Review, now based at Southern Illinois University-Carbondale. In that role, he did not hesitate to criticize his former employer, which Hartmann sold in the late '90s to new owners in Phoenix.

“I got to know Ed quite well and was deeply impressed not only by his deep knowledge of the print and broadcast media, but his understanding and commitment to the role of media in sustaining and promoting our maturing democracy,” Charles Klotzer, one of the founders the SJR, says.

While editor of the SJR, Bishop spent his days teaching Webster classes like with deceptively simple titles like “Fundamentals of Reporting” — a course he had been lined up to teach yet again in the fall semester.

“I went into [Fundamentals of Reporting] a little cocky, since I'd been the editor of my high school paper and done an internship at my hometown paper already, but Ed set me straight on what I thought I knew, but actually didn't, about journalism,” recalls former student Jonathan Kleinow.

New journalism students will be missing out, says Larry Baden, an associate professor at Webster.

“I think it was his mission to send prepared, serious journalists in the world, and if they weren’t serious, he didn’t want them in journalism,” Baden says. “If you were serious, he was going to make you a great journalist. I’ve probably heard from 50 people today. everyone of them with their own Ed story.”

Former students remember Bishop as much for his principled stances about the little things — getting names, titles, dates, facts right — as his stories on the craft of being a reporter. Sometimes he offered tips as simple staking out somebody dodging an interview (go buy two Diet Cokes, sit in your car outside your subject’s apartment, and just wait). Other times, there were verbal dance lessons.

“To this day, I still use his method for getting people to say more without thinking you're asking them to,” says Leigh Muzslay Browne, a former student. “With the right inflection, a simple, ‘No shit?’ or ‘Really?’ works wonders.”

Jill Moon, a former student and SJR employee, tells the RFT that "Ed was my first and strongest mentor, the most fearless journalist I've ever known, and I keep his example and guidance with me every day.”

Avis Meyer, the longtime journalism professor at Saint Louis University who’s soon to have emeritus after his name, was Bishop’s counterpart at the Midtown Jesuit university. Off-hours, he and Bishop would gather regularly with friends in the basement of Balaban’s in the Central West End (now Herbie’s Vintage 72), where no smoking was allowed. He’d step off the to side, tilt his head 90 degrees, and blow smoke into the restroom instead.

“He was the beard that smoked,” Meyer says. “And he got away with it, because everybody liked the guy in the basement of Balaban’s.”

[Update: An earlier version of this story reported that Bishop passed away on Tuesday. The story has been updated to indicate it happened on Monday. We regret the error.]