8 Amazing Things to Do in St. Louis This Week 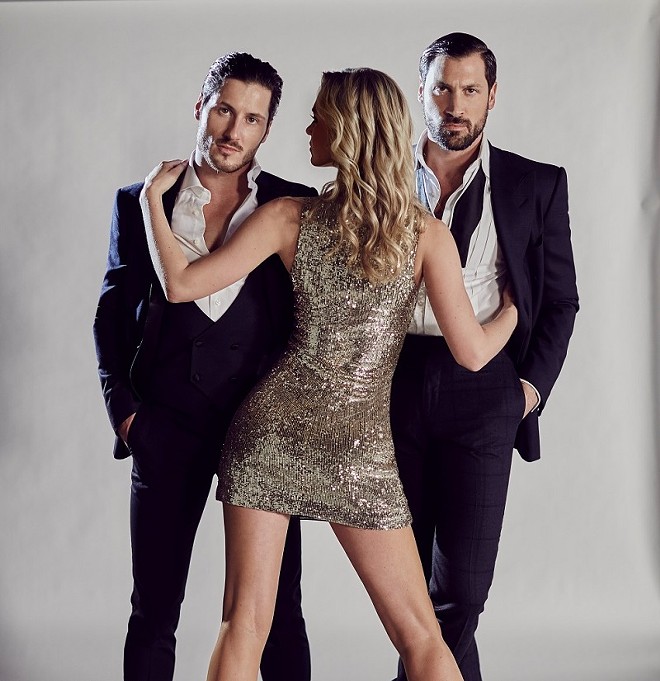 Sticky weather got you down? Find an air-conditioned theater this weekend, and it's likely there's a really good production premiering there. Or slip into the Pulitzer to check out a new show featuring the work of Claes Oldenburg. Heat not a problem for you? Get thee to the Grove, stat, where — breeze or no no breeze — an action-packed bicycle race will have the wind ruffling your hair.

Here are our picks for eight things to do around town this week.

1. Catch a musical at COCA
The music of Led Zeppelin was used in a series of Cadillac commercials a few years back, which proves that rock & roll has been completely assimilated by corporate America. But in the early days of rock, it was the music of wild-eyed hillbillies and dapper young black men. David Bryan and Joe DiPietro return to those dangerous times in their rock & roll musical, Memphis. White rock fan Huey Calhoun frequents the black clubs of Memphis to feed his soul, and not just with music. He meets Felicia, a young singer, at Delray's, but Delray isn't very keen on his sister dating a white man. Fueled by his growing love for Felicia and his belief that this dangerous new music could bring together the black and white population of Memphis, Huey lands a job as a DJ and sets the city on its ear with his colorblind programming and wild personality. The Center of Creative Arts presents Memphis with a cast of high-schoolers and some select COCA alumni as its summer musical. Performances take place at 7 p.m. Friday and 2 and 7 p.m. Saturday (July 29 and 30) at Washington University's Edison Theatre (6445 Forsyth Boulevard; www.cocastl.org). Tickets are $16.

2. See the new show at the Pulitzer
Pop artist Claes Oldenburg set himself counter to the staid abstract expressionists who ruled the modern art world in the '50s with his sense of humor and his flair for the dramatic. His oversized, brightly-colored sculptures of familiar objects such as lipstick and three-way plugs were ridiculed in the early days, but are now recognized as important works by a major artist. The Pulitzer Arts Foundation's (3716 Washington Boulevard; www.pulitzerarts.org) new exhibit, The Ordinary Must Not Be Dull: Claes Oldenburg's Soft Sculptures, showcases a selection of some of the artist's most playful works. Soft Switches (1964) is a ductile pair of light switches in glistening red, gravity tugging them into bonk-eyed uselessness, but Oldenburg's Green Beans (1964) are a Jolly Green Giant-sized pile of viridian pods with plump, glistening beans peeking out of either end. The Ordinary Must Not Be Dull opens with a free reception from 6 to 9 p.m. on Friday, July 29. Oldenbug's sculptures remain on display through Saturday, October 15, at the Pulitzer Arts Foundation (3716 Washington Boulevard; www.pulitzerarts.org). Admission is free, and the museum is open Wednesday through Saturday.

3. Catch all the Harry Potter action in Maplewood
Did you believe you'd heard the last from notorious he-witch Harry Potter? Well, he's back, and real-life has caught up with Potter at last. He's slaving away in the Ministry of Magic with three kids at home and a minor case of wand dysfunction (presumably — he's in the right demographic for it to be an issue), and his youngest child is struggling mightily with the family legacy. If you want to know how it all turns out, you'll have to read Harry Potter and the Cursed Child — Parts One & Two. The new book is actually a rehearsal script for the first Harry Potter play, which opens in London on Saturday, July 30. (That's today.) The book is officially available on July 31, which is technically midnight Saturday. The Book House (7352 Manchester Road, Maplewood; www.bookhousestl.com) feeds your habit at the stroke of midnight with "The Party That Dare Not Speak Its Name." The party includes a costume contest, Tarot readings, chocolate frogs, Butterbeer and Dragon's Milk (why would a reptile produce milk?) and other surprises. The party starts at 5 p.m. and ends at 12:30 a.m., and admission is free. Pre-order your copy of the book through the Book House to ensure you get one.

4. Weep your way through a tragic opera
Life has become very uncomfortable for Tosca, Naples' favorite singer. She believers her paramour Cavardossi is tom-catting around with another woman, when in fact he's planning a jailbreak for his old pal Angelotti. The two buds get away with it, but the horny police chief Scarpia uses Tosca's jealousy to track down the two fugitives — and when he catches them, they'll both pay for their temerity. Union Avenue Opera presents Puccini's tragic drama Tosca as its second show of the season. The setting for this new production is Rome in 1940, as the war threatens to engulf the Eternal City. Tosca is performed at 8 p.m. Friday and Saturday (July 29 to August 6) at Union Avenue Christian Church (733 North Union Boulevard; www.unionavenueopera.org). Tickets are $30 to $55.

Turn the page for more fun events in St. Louis this week. 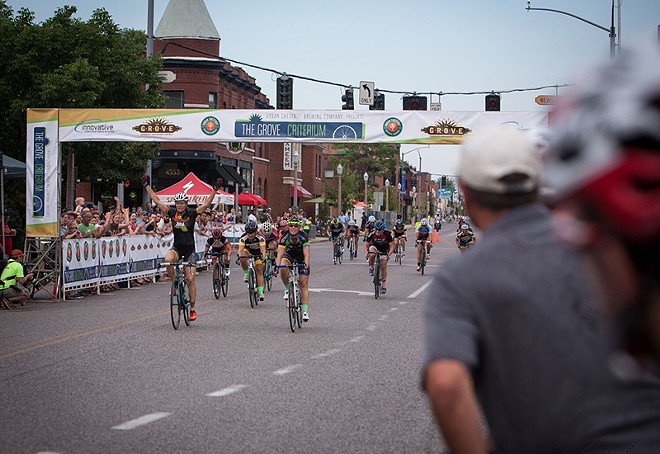 5. Thrill to some expert ballroom dancers at the Fabulous Fox
Maksim Chmerkovskiy left Ukraine for America in the 1990s to conquer the country through competitive Latin ballroom dance. By 2002, he was ranked second in the nation and seventh in the world. He went on to conquer Dancing with the Stars, which he won with Olympic ice dancer Meryl Davis. Younger brother Valentin followed in his dance shoes, winning a world junior championship under Maks' coaching. Valentin also appeared on DWS, winning the twentieth season with Rumer Willis. The brothers take their show on the road in Maks & Val Live on Tour: Our Way. They dance at the Fox Theatre (527 North Grand Boulevard; www.fabulousfox.com) at 7:30 p.m. tonight. Tickets are $48 to $98.


6. Check out a cool bike race in the Grove
High-speed bicycle racing returns to the Grove in the second installment of the Grove Criterium. The cyclists have a set amount of time to complete as many laps as they can on the 1.2-mile course, which features six turns. The first race (there are nine categories for male and female riders, with prizes for each category's winner) starts at 10 a.m. in front of Urban Chestnut (4465 Manchester Avenue; www.thegrovecrit.com). The brewery gets into the spirit in a big way, with a race-day expo that includes a beer garden, food and live music throughout the day. Admission is free for spectators and $60 for prospective riders.

7. See an important film at Webster U
A film that utilizes the talents of stoic comedian Buster Keaton and avant-garde writer Samuel Beckett seems like it would be a sure thing, but their only collaboration is as much of an enigma as it is a treasure. Beckett's "Film" requires Keaton to hide his face and flee from the camera, which pursues him relentlessly. The result is perhaps the ultimate distillation of the chase scene cliche, reducing the visceral thrills wrought by high-speed cinema kinetics to paranoia and existential terror — for Keaton's unnamed character and the audience. The Webster Film Series presents this lost gem in a double feature with Keaton's zany romantic comedy The Cameraman. The Great Stone Face plays a man in love with a woman who works at MGM Studios; he decides to get a job as a cameraman so he can be close to her, with some unexpected results. "Film" and The Cameraman are shown at 8 p.m. Friday through Tuesday (July 29 to August 2) at Webster University's Moore Auditorium (470 East Lockwood Avenue; www.webster.edu/film-series). Tickets are $4 to $6.

8. Catch Cirque du Soleil's new show at Chaifetz Arena
Insects are all around us, but we only notice them when they're biting us, stinging us or drowning in our beverages. Cirque du Soleil imagines a realm of bugs that experience curiosity, joy and love in its new show, Ovo. An egg appears one day in the center of the insects' community. As they ponder its meaning and possible significance, a quirky new insect wanders into town. Very quickly he notices a beautiful ladybug, and she notices him. You'll never look at a bug zapper the same way once you've witnessed the colorful, acrobatic and spell-binding world Cirque du Soleil creates in Ovo. The show is performed at 7:30 p.m. Wednesday through Friday, 4 and 7:30 p.m. Saturday and 1:30 and 5 p.m. Sunday (August 3 to 7) at the Chaifetz Arena (1 South Compton Avenue; www.thechaifetzarena.com). Tickets are $25 to $135.