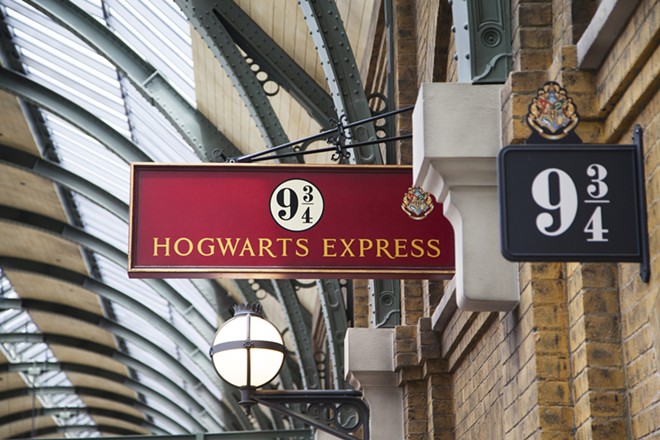 Notorious goody-goody magic twerp Harry Potter has another book on the way, or more accurately, "book." This ersatz story is actually a hastily-printed version of the "special rehearsal edition script" for a play written by Jack Thorne called Harry Potter and the Cursed Child, which is in turn based on a story written by J.K. Rowling, John Tiffany and Jack Thorne. It's your typical group project; the deadline has come and gone, and all Team Wyzard Chylde has done is turn in its notes and hope that's enough for a passing grade.

I can’t be alone in my cynicism; even some Harry Potter fans may suspect this latest release is little more than (yet another) attempt for Rowling and Co. to cash in. But my skepticism goes way beyond this latest tome. I’ve long been convinced that the Harry Potter books are poorly written rehashes of world mythology and the works of more competent authors, lacquered up with pidgin Latin and festooned with the latent homosexuality of the English public school system. Daniel Radcliffe is the personification of ol' Magicus Dillweedizar thanks to the films, but pasty dough homunculus Boris Johnson is closer to the actual truth of the character.

For the sake of my beloved niece (who will never forgive me if she reads this), I made an effort to read the first book, which I believe is called Harry Potter is the Golden God of Mary Sues. After 50 onerous, awkwardly constructed pages, I gave up. My only regret is that I didn't stop 48 pages earlier — and also that I had been taught to respect books. If not for that, I would have shit on page 50, burned the book, soaked the ashes in a bath of lye and essential pine oil, then formed the resultant mass of goo into a bar of soap which I then placed in the middle of an empty bird bath and waited happily for the rain to reduce it to nothingness.

It is that respect for books that drives me to denounce Harry Potter. It's not just because Rowling's writing is so bad (it is, though), but rather because she clearly read many of the great fantasists and was inspired by their work — inspired to the point of lifting plots, characters, names and events from their books and jumbling it all up into a thin gruel, devoid of flavor, meaning or import.

You're free to read what you will. And so I can't stop you from rushing out to spend $29.99 on this written-by-committee-cash-grab — but I can advise you that are better options.

Options such as Lloyd Alexander and his fantastic series The Chronicles of Prydain. Loosely inspired by Welsh mythology, this five-book series tells the story of Taran, a young orphan farmhand whose duty is to tend to the oracular pig Hen Wen but who dreams of becoming a great hero. As he ages he goes on adventures, develops a fraught relationship with Princess Eilonwy (rhymes with "Hermione," and in these books, our heroine rescues Taran as often as he saves her), and struggles to develop his own sense of identity as an adult with duties to friends, his nation and his new family.

Stack up all five volumes and they're barely as thick as the last Potter book, but they tell a full, rich story from the tenuous first steps of youth to the thoughtful, responsible strides of adulthood. Disney poorly adapted the first book as the animated feature The Black Cauldron, which lacked all of Alexander's charm and action, but a new big-budget live-action film is supposedly in the works, once again from Disney. I expect it will also miss the point and end up being somewhere between Peter Jackson's The Hobbit and Rambo: First Blood Part II.

Also Welsh in nature and feel is Evangeline Walton's The Mabinogion. It's a big fat book (really four novels combined in one tome) that is steeped in the dream-like magic of pre-Christian Europe. It's a sprawling tale set in an alien world of shape-changers, bafflingly strict honor codes and an escalating series of alliances and betrayals that knit together the fates of kings, queens, their children and the dread Arawn, ruler of the underworld. Walton is a marvelous stylist, revealing character through deed and action, so that even when the names are confoundingly similar (Pwyl & Gwawl, Gwydion & Goewin) it's clear who is who. It's maybe too much for the kids (there's a great deal of unkind adult behavior), but nothing they won’t experience in much more graphic fashion in Grand Theft Auto.

Finally, if you really need to read about boy wizards, the six slim volumes comprising Ursula K. Le Guin's The Wizard of Earthsea should do the trick. Ged is a young wizard — and he's a black man, despite what you may have seen in the insipid Sci-Fi channel adaptation or Studio Ghibli's tone-deaf animated feature. He has an innate skill for magic, which relies on knowing the true names of all things. If you know the true name of a person, creature, rock or animal, you have power over it. Ged goes to the city to study magic, and grows cocksure of his might — in a duel with another student, he inadvertently allows something from beyond death to enter the world, with dire results. (He gains a distinctive scar on his face from this first encounter — you Harry Potter fans love that shit.) Ged is atypical of the genre, in that he makes mistakes, struggles to right them and grows to realize that power is meaningless unless it is exercised in the service of others. Le Guin writes with a simplicity and subtlety that belies the depth of her ideas, and each of the books is eminently re-readable.

Are you unconvinced? Do you think this non-Potter fantasy is for nerds and nose-pickers, and all you really want is tales of a boy wizard and his red-headed best friend getting into scrapes with their close female friend in the exotic confines of a wizard school where the paintings move and an evil wizard lurks in the shadows, biding his time until he can destroy everything these kid-magicians value? Well, you're gonna love Jane Yolen's Wizard's Hall, which has all that stuff and came out in 1991. The wizard in question is named Henry, though, so you'll just have to cope.