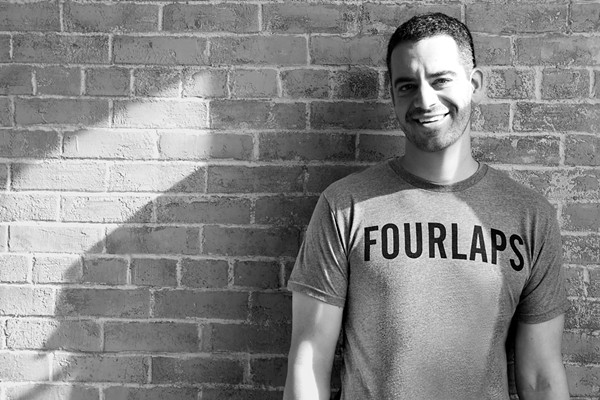 In order to achieve your dreams sometimes you have to step outside your comfort zone, take a chance, and just go for it. Sometimes you just have to "start before you're ready."

That saying has become the tagline for Daniel Shapiro's new men's athletic apparel brand, Fourlaps. Shapiro, the 39-year-old founder and CEO, says he's learned to do just that in launching the line, which takes its name from the number of times around a track comprising a mile.

Shapiro is the sole owner and founder of the clothing brand. With the exception of a few people he has hired for logistical aspects like overseas manufacturing and public relations persons, he has produced all of this on his own and has gone full force with this idea and attitude towards fitness and life that he really believes in.

"'Start before you're ready' is stitched into every garment, whether it is printed on the shirt or sewn into the hem inside," he explains. "It serves as that motivating reminder to go for it, even if you know there's a risk, which is a huge part of working out and playing sports."

Shapiro maintains a very active lifestyle; he runs, weight trains and goes to the gym six days a week. He even meditates twice a day. He wants to produce athletic apparel that is functional for all sports and workouts while still looking good.

"Everything with the exception of our sweatpants and hoodies is $49.50 or below, which is good because most guys don't want to pay that much for workout clothes but they want them to be breathable and comfortable when they are active," he says.

Even though he is currently living in New York City, Shapiro knew that he wanted Fourlaps to have a connection to St. Louis.

"I wanted to be able to support my hometown, so some of the clothes are actually manufactured here in St. Louis," said Shapiro. STL-Style, the company based near Cherokee Street, has been tasked with producing the company's hats, beanies and signature t-shirts.

Shapiro grew up in the Clayton area, attending Clayton High School, and he knows a thing or too about following your dream.

"I lived in D.C for a bit, then I moved to L.A. where I did merchandising for Gap; now I'm in New York where I am starting this company and essentially doing everything on my own," he explains.

The clothing line launches August 1 and will retail online-only at fourlaps.com.

During its prelaunch period, resources are limited, but Shapiro hopes that he can use a wider range of materials in the future and even some all-natural fabrics.

"I'd like to become the premiere independent athletic apparel brand," he says. "These clothes are built to fit a guy's life, and I want any guy who stays active to be wearing these products in the future."

Editor's note: A previous version of this story gave an incorrect date for Fourlaps' launch. It is now scheduled for August 1. We regret the error.