Pokemon Are Popping Up in Strange Places Around St. Louis 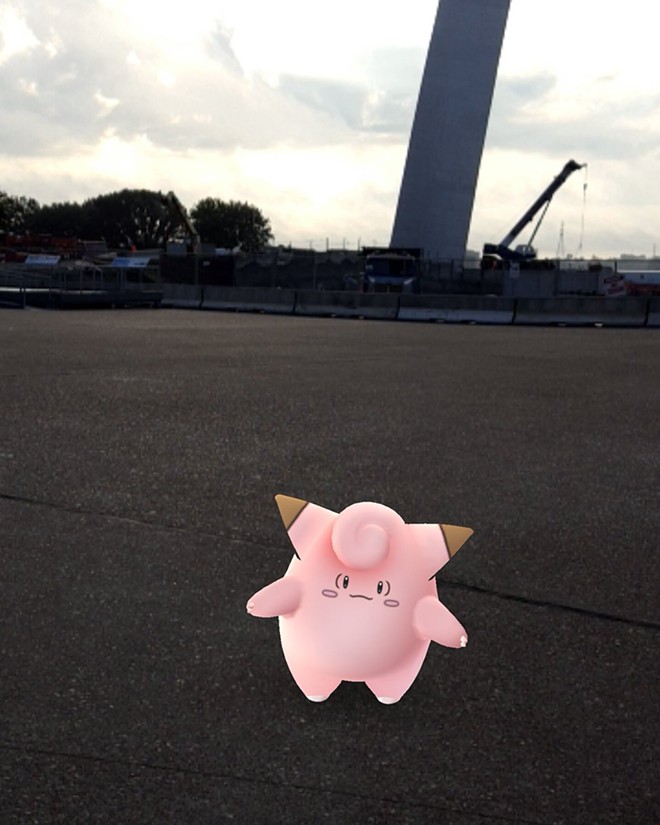 Pokemon Go has seemingly taken over the world — and that, of course, includes St. Louis.

And it's not just that we're home to the infamous muggers who used the new smartphone app to lure victims to O'Fallon, then robbed them. The fictional creatures are swarming other offbeat spots throughout the city.

The Pokemon Go app, released July 6, allows anyone with a smart phone to use their GPS to track down the virtual characters in their front yards, at work, in cemeteries and sometimes in even jail parking lots. Its popularity has led to near-hordes of people staring into the smartphone abyss at several of St. Louis-area landmarks. The Loop, not surprisingly, has become an absolute minefield.

One spot that is getting more foot traffic than usual is the Jefferson County Jail, which is apparently an official in-game Pokestop, a place where players can gather items and catch Pokemon. One observer recalls seeing players staring at their phones as they walked around the jail's parking lot.

As it turns out, Kutis Funeral Home on Gravois Road near Kirkwood is also an official Pokestop. (We're crossing our fingers that no one has wandered into any funerals looking for a Pikachu.) Oak Hill Cemetery at Big Bend and Highway 44 is another Pokestop. Clearly, the developers of the app hoped for some morbid curiosity when it came to these stops.

Not all cemeteries are amused. In Virginia, Arlington National Cemetery warned Pokemon Goers that they were breaking federal laws by trespassing on the land. Even worse, the Auschwitz Holocaust Museum had to ask visitors to “please stop catching Pokemon here" not a week after the app launched.

A concern for businesses trying to thwart players from invading is that, Pokestop or not, these fictional creatures can randomly spawn in any place. Private property or public property is up for grabs (your house could even be the next Pokestop).

The app's creator, Niantic, chose the official Pokestops using Google Maps, basing the locations it selected on geotags and a former app created by the company. But Pokemon aren't just centered around those locations — they can also be out in the wild. New unofficial Pokestops are being added almost continuously as the game continues — and the Pokemon that pop up for future player could be unsettling.

For instance, a player walking through a graveyard might find a Ghastly, a ghost Pokemon, on top of an actual grave site. Morbid, and a bit distasteful for the deceased's family members, to say the least.

So what's the strangest place in St. Louis you've caught Pokemon or found a Pokestop? Send us your best locally based Pokeshots. We'll publish them; the stop we judge the weirdest will win you a $20 gift card to Chinese Noodle Cafe at 6138 Delmar Boulevard.