Goodbye to the Colony II, a Swinger/Adult Film Hub in East St. Louis 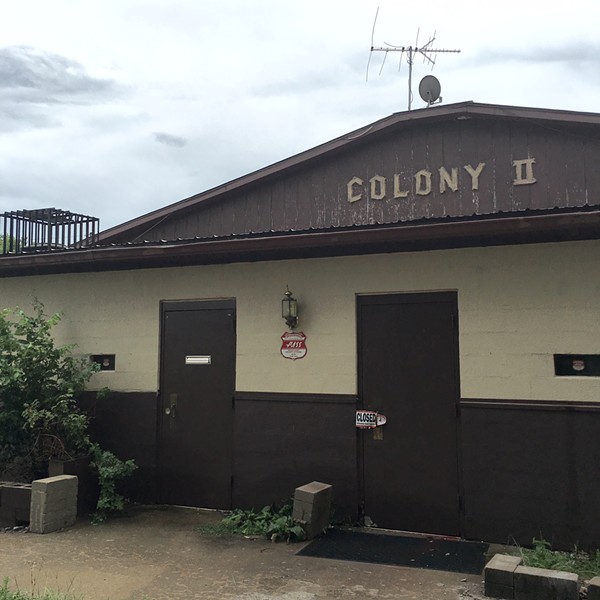 In the end, the circumstances and details surrounding the demise of the East Side’s longest-running adult cinema are just as blurry as the films (well, tapes) that played on the venue’s smoke-stained screens.

The Colony II was established in East St. Louis in 1991, according to the website Cinema Treasures, although the décor was a mishmash of ‘70s-through-‘90s influences. It was operated by a company called Venice Films, established in 1975, which at one point ran two adult cinemas in East St. Louis, located just few blocks apart. The first, the Colony, preceded its younger sister in death.


For decades, the Colony II was a center for St. Louis’ swinger subculture, with the primary “couples theater” showing VHS classics in a locked room, filled with cloth-lined couches sitting atop cinderblocks. Several now sit in a sad, high pile behind the building.

While the ancillary theaters and a breathtakingly dated lounge were open to all –- with lots of solo-flying gentlemen as attendees –- the couples theatre and secluded dance floor were limited to key-holders. Those magical entry keys were doled out by the club’s desk attendant, along with a handful of branded drink chips; on any given night, the prices varied, as the night’s entertainment was often chalk-marked as a “private party.” For $30 to $60 a couple, the veil of exclusivity was lifted and you were a club member for the evening.

But it was not to last.

As first reported by the Belleville News-Democrat, the cinema was unceremoniously shuttered during the early-morning hours of Saturday, May 14. The News-Democrat piece details a raid by East St. Louis’ police: “Deputy Liquor Commissioner Natavia Sanders said adult films are not allowed in East St. Louis theaters and during her investigation of the place, she found the owner to be showing adult films. ‘They didn’t have a city or state liquor license or a business license,’ she said.”

But the Colony had been showing adult films for decades. Downright laughable is the notion that East St. Louis officials didn’t know what was happening until recently.

Neither the East St. Louis mayor nor police chief responded to calls and emails seeking comment last week. Calls were also made to several numbers attached to the business, as well as a Facebook message. Two visits to the site failed to yield anyone who could talk.

The place (later officially renamed “Colony Theater and Cocktails”) looked closed – and more than a bit intimidating – even when it was open. Set back from the street, a U-shaped driveway cut around a dilapidated, open-air doghouse; a thick treeline crept along the property line, then stopped abruptly near the building’s weathered, fortress-like walls. The eight front windows were slits, better to see out of than into. Its location on a block filled with mature woods and collapsing frame homes allowed it to exist for two-and-a-half decades in this strange sliver of space.

The most interesting clue to its demise comes from an odd source. On Cinema Treasures, an adult theater blogger known as Dr. Emilio Lizardo wrote, “The business was sold when the long time owner, Ed Komorek, passed away and in turn was sold by his heirs. From what I understand licenses were not obtained by the new owners and the business (which was to be re-named ‘Kisses’) was shuttered by the city.”

Records show that Venice Films Inc. was dissolved on December 11, 2015 by the Illinois Secretary of State. At the time, paperwork showed, the business was under the ownership of Edward Anthony Komorek III of Olathe, Kansas; other documents show him as a resident of Webster Groves.

In 2000, RFT writer Eddie Silva got up-close with Komorek’s father, Edward Komorek II. He detailed the encounter in a piece titled “Video Killed the Pornography Star”:

“’Who would go to a theater when they can get their rocks off at home?’ says Ed, the owner/manager of the Colony, the last remaining triple-X house in the region. Ed (who really isn't interested in being in the newspapers, so leave it at Ed) has operated the Colony for 30 years. A dilapidated wooden structure on a foundation of cinderblocks, the Colony sits unobtrusively on the East St. Louis/Washington Park border, not far from the Grace Union Methodist Church and close to a new housing development in one of the worst zones of poverty in the region. To Ed, the rows of new homes mean nothing more than ‘more shootin',’ which he's prepared for — the butt end of a .45 is prominently displayed in the pocket of his blue jeans.”

Big Ed, who would have been approximately 77 at the time of his death, was usually the deep-voiced greeter who met theatergoers upon entry, an imposing guy behind an equally-imposing desk that overlooked the front door.

The comment he made to Silva about a weapon proved eerily prophetic. In 2010, the Post-Dispatch covered a case in which a man named Travis Heard, 35, was stopped in the act of stealing metal from the roof, then shot when escaping the cinema after detention by the owner. As part of the Colony was in East St. Louis and part in Washington Park, Heard was shot in one municipality and perished in the other.

Big Ed was not charged. He told investigators that someone had stolen an air conditioner from outside his business the week before. “He made arrangements for a new one and was staying in the building to make sure nothing else got stolen, police said… He was holding Mr. Heard as a burglary suspect and, in an attempt to call police, there was a shot fired and Mr. Heard fled from the scene." Since then, the Colony II’s air conditioning units have been topped by steel cages.

Time finally caught up with the Colony II this year. The Colony’s Facebook page was last updated in mid-April, advertising a weekend twerking contest. Then … nothing. After the May raid, the building’s featured a “closed” sign, one that’s slotted right through the front door’s handles.

While the swinger community that congregated there already had established email channels and Facebook secret groups for connection outside of the place (which were liberally pitched to non-regulars and newcomers), it’s future generations of gawkers who’ll lose out. For an outsider, the appeal of a drop-in wasn’t the organized, awkwardly unsexy events; it was the people-watching that made the scene, those folks existing amidst the crazy decor. The Colony II’s cocktail lounge, in particular, was a remarkable room, featuring multiple, small TVs showing adult fare, a Smithsonian-worthy collection of kitsch, exotic wallpapers, a rotating hot dog machine and a fish tank full of neon tetras.

There was nothing else like the Colony II. Probably never will be again. 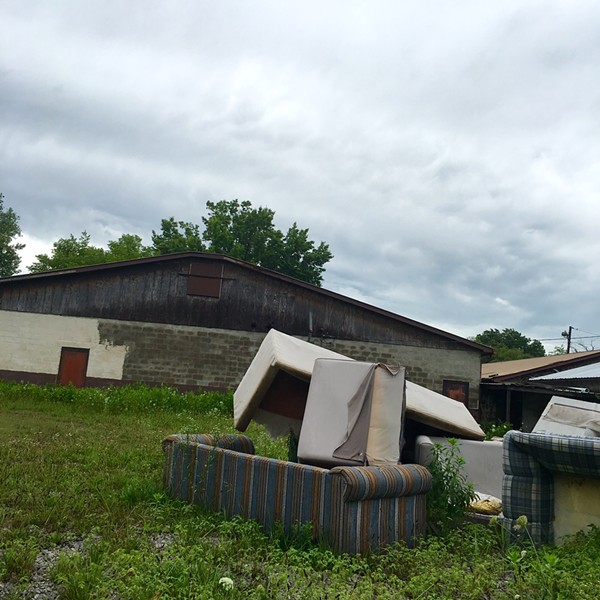