New Miss Missouri Erin O'Flaherty Is Proud to Be Gay

All 30 contestants competing Saturday to become Miss Missouri were likely nervous: the winner goes on to the Miss America pageant — and so not only are the honor and glory of victory at stake, but also tens of thousands of dollars.

But St. Louis resident Erin O’Flaherty had special reason to be anxious: She wondered if being openly gay would hurt her chances.


“I had my concerns about it. Progressive is not exactly a word people might think of when you think Missouri,” O’Flaherty admits.

The crown that was placed on her head Saturday night said otherwise — as Missouri crowned O’Flaherty its first openly gay winner. In September, the 23-year-old boutique owner has the chance to become the first LGBT Miss America in the pageant’s 95-year history.

A native of South Carolina, O’Flaherty came out when she was 18. She’d begun competing in Miss America contests a few years before that while studying at the University of Central Florida, or UCF. She was crowned Miss UCF almost immediately after coming out.

“My coming out was very public, which was hard because you want it to be very private. The public access to that was very challenging because I wanted to protect my relationship, and who I am and come to terms with myself before the rest of the world got a chance to,” O’Flaherty says.

Now O’Flaherty says she wants to use her moment in the spotlight to open eyes up to the LGBT community.

“I didn’t choose to be the first; I just am. Often you hear that our politics don’t always match our people and I think that’s really true,” O’Flaherty says. “What I’m going to try to do this year is open up people's eyes and minds a little bit.”

O’Flaherty’s platform is suicide prevention, O’Flaherty says. At the age of 13, one of O’Flaherty’s close friends committed suicide. As she mourned she realized all the warning signs had been there, and over time she saw how suicide affects the LGBT community in particular.

“I don’t carry a rainbow flag with me everywhere I go, you know,” she says. “It’s not going to be my focus, but I certainly hope my presence will help people open up a little bit more. I’m very open about it. It’s never going to be something I try to hide because I’m very proud to be a member of the LGBT community.”

When she’s not competing, O’Flaherty owns and runs Rachel’s Grove, a women’s boutique in Chesterfield. She moved to Missouri three years ago after graduating from UCF with a degree in accounting.

At 23, O’Flaherty only has one year left of eligibility in the Miss America competitions. She decided to compete this year because she didn’t want to have to look back and ask “what if?”

She hopes winning Miss Missouri and moving on to the Miss America pageant sends a message to any other young LGBT members who hope to compete someday.

“I think it's really nice that maybe somebody in the state might be able to relate to me and think they can do this too,” O’Flaherty says. “I don’t think I had that when I was growing up.
”
O’Flaherty will head to Atlantic City, New Jersey, for the national competition in September. She says while the reality of winning Miss Missouri hasn’t quite set in yet, she’s ready.

“It's a big deal for me to go openly and lay it all out there,” O’Flaherty says. 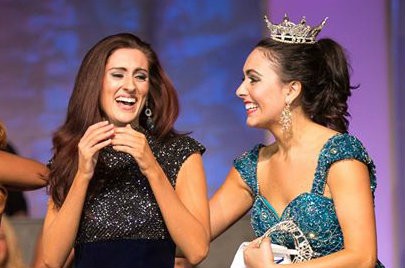