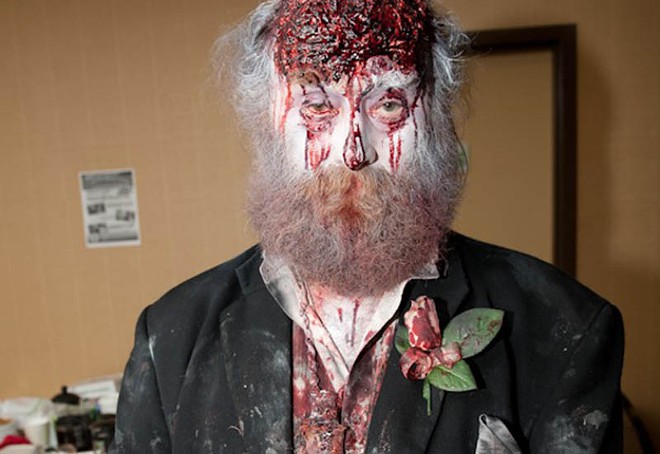 Sure, you could spend this weekend in your darkened apartment, the air conditioning on full blast — or you could get out there and do something fun! We've got a list of great things to do, and none of them will set you back more than $15.

Here are our picks for the best things to do this weekend.

1. See a moving film at Webster U.
How much can children ever know about their parents' emotional lives? Filmmaker Karen Shattuck was compelled to dig into her parents' relationship as her own wedding day approached. When she was in middle school, her father announced to the family that he was transgender and would live as Tricia. Now an adult, Shattuck finally asks her mother Marcia how she and Tricia navigated the change and emerged still together and in love. The resulting documentary, From This Day Forward, is about how real love transcends all difficulties. The Webster Film Series screens From This Day Forward at 8 p.m. Friday through Sunday (June 17 to 19) at Webster University's Moore Auditorium (470 East Lockwood Avenue; www.webster.edu/film-series). Tickets are $4 to $6.

2. Catch a classic play at Lindenwood
English playwright J.B. Priestley went after the hypocrisy of the comfortable middle class in his drama An Inspector Calls. On the night Arthur Birling should be celebrating the engagement of his daughter Sheila, who is marrying the son of his business rival, he is instead answering a series of probing questions delivered by the dogged Inspector Goole. Goole believes that all of the people at Sheila's engagement party are somehow responsible for the suicide of Eva Smith, a young working-class girl. The more Goole probes, the more proof he finds of both families' cruelty and callousness. Act Inc presents An Inspector Calls at 8 p.m. Friday (June 17 and 24), 2 p.m. Saturday (June 18 and 25) and 2 p.m. Sunday (June 26) at Lindenwood University's J. Scheidegger Center for the Arts (2300 West Clay Street; www.actincstl.com). Tickets are $10 to $20.

3. Check out the brand-new space at the Science Center
If foodie culture has an upside, it's that more people care now about where the origins of the food they eat. So where does our food come from? This question and many others are answered in the new exhibition Grow, which opens Saturday, June 18, at the Saint Louis Science Center (5050 Oakland Avenue; www.slsc.org). The former site of the Exploradome is now a series of educational stations that explain everything from water conservation and the basics of botany to the care and feeding (and milking) of animals at the Animal Corral (which will have visiting livestock on select days). Grow also welcomes a series of visiting artists who have reinvented the chicken coop and created a system of condos for bees. Grow will be a permanent exhibition at the Science Center, and admission is free.


4. Get a load of Contamination at the Stratford Inn
For a while there it looked like Contamination was dead, and maybe it was. But the convention devoted to horror, sci-fi and pop culture has risen to stalk the land once again. The Return of Contamination features a dealers' room, film screenings, a midnight seance and a host of special guest stars who will sign autographs and pose for pictures. Most of the surviving cast of the original Battlestar Galactica (Dirk Benedict, Richard Hatch, Herbert Jefferson, Jr., Annie Lockhart and Jack Stauffer) is scheduled to attend, as are stuntman Jim Winburn and porn star Seka. The con is on from 4 to 9 p.m. Friday, 11 a.m. to 8 p.m. Saturday and 10 a.m. to 5 p.m. Sunday (June 17 to 19) at the Stratford Inn (800 South Highway Drive, Fenton; www.con-tamination.com). Tickets are $15 to $65.


5. Participate in some underground art
The St. Lou Fringe Fest is still a few months away, but that doesn't mean you can't enjoy a little outre entertainment right now. The St. Lou Fringe Artist Salon is a celebration of new artistic exploration. Local and national artists will be paired together to create new, collaborative works on the spot right before your eyes. Some of the performers meet each other for the very first time on stage. The St. Lou Fringe Artist Salon takes place from 7 to 9 p.m. Sunday at a secret location that is only revealed when you buy your $10 ticket, which is available through www.stlfringe.com.


6. See a staged reading of a gripping play
George C. Wolfe caught Americans unaware with his "exorcism and party," The Colored Museum. The play comprises eleven sketches that do everything from skewering the black mammy stereotype to confronting the mysteries of black women's hair to dealing with the unshakeable nature of personal history. Twenty years later, the play still retains its power. The Black Rep and the Contemporary Art Museum St. Louis (3750 Washington Boulevard; www.camstl.org) join forces to present a staged reading of The Colored Museum at 7 p.m. Monday, with CAM's current exhibitions serving as backdrop. Admission is free.


7. Learn about an art movement at SLAM
The art world is a vast organism that eventually absorbs and repurposes all ideas, even those of non-artists. While outsider artists — those who are not classically trained but still make visual art — were by definition outside the world of galleries and museums during their lifetimes, the establishment has embraced their work as a valid and even important development. Self-Taught Genius: Treasures from the American Folk Art Museum, the new exhibit at the Saint Louis Art Museum in Forest Park (314-721-0072 or www.slam.org), showcases the breadth and depth of non-traditional work throughout American history. The exhibit's organizers at the American Folk Art Museum break down practitioners into seven categories, from Reformers (those who sought to change the world with their output) to Encoders (artists whose work defies understanding by choice). Self-Taught Genius showcases more than 100 objects that span the length of American history, from colonial times to the present. The exhibit is open Tuesday through Sunday (June 19 to September 11). Tickets are $6 to $12 but free on Friday.