9 Terrific Things to Do This Week in St. Louis

It's the weekend, which means it's time to tear yourself from your desk and get out there and have some fun. Whether you're interested in theater or beer, a Mad Max parody or an art show featuring man's best friend, this week has something for everyone.

Read on for our picks for the nine best things to do.

1. See a play about bridesmaids
The American wedding-industrial complex is oiled by the blood of bridesmaids. How many women have suffered through bridal showers thrown by both sides of the family, fittings and bachelorette parties just for the privilege of buying — and worse, wearing — an ugly dress? Where's their monument? Alan Ball, creator of True Blood and Six Feet Under, has answered the call with his dramedy Five Women Wearing the Same Dress. Tracy may be enjoying her overdone big Southern wedding, but her bridesmaids are all hiding out in the childhood bedroom of her younger sister, Meredith. Together they wonder what it was they did to earn the honor of bridesmaidhood and talk about the bride and her husband. Stray Dog Theatre presents Five Women Wearing the Same Dress at 8 p.m. Thursday to Saturday (June 9 to 25) at the Tower Grove Abbey (2336 Tennessee Avenue; 314-865-1965 or www.straydogtheatre.org). Tickets are $20 to $25.

2. See a hilarious parody of the Mad Max films
Magic Smoking Monkey, the demented little brother of St. Louis Shakespeare, is back with another audacious assault on a pop-culture classic. The company plans to perform the three original Mad Max films (Mad Max, Road Warrior and Beyond Thunderdome) plus the new installment, Fury Road, all in about 60 minutes. How will they pull it off? Cheaply. Very cheaply. Experience the heat of post-apocalyptic Australia, the car chases, the enormous dudes in leather jock straps and the savage accents as Max Rockatansky cruises the badlands looking for gasoline and vengeance. There's also a costume contest at every show. Mad Max — The Ape-ocalypse takes place at 8 and 10:30 p.m. Friday and Saturday (June 10 to 18) at the Regional Arts Commission (6128 Delmar Boulevard; 314-364-5664 or www.stlshakespeare.org). Tickets are $10 to $15.

3. Help a good cause by viewing art
Stray Rescue regularly finds dogs in terrible conditions and worse shape and then works hard to heal them so they can be happily adopted. More than 80 artists were invited to create art inspired by Stray Rescue's success stories for the exhibition Urban Wanderers. Photographs, paintings and sculptures of the dogs who made it will fill the Saint Louis University Museum of Art (3663 Lindell Boulevard; www.strayrescue.org) Friday from 5 to 8 p.m. for the opening reception. And along with the artworks will be some of the dogs, some of which also made their own portraits (with paint and paws). All of the work will be auctioned off online to raise money for Stray Rescue's ongoing mission of mercy. The show remains up through July 24.

4. Drink craft beer at the Arch
When the St. Louis Brewers Guild wishes to celebrate beer, it does not do so on a small scale. The tenth annual St. Louis Brewers Heritage Festival includes more than 40 local breweries offering samples of more than 100 beer styles in the newly refurbished grounds of the Gateway Arch (200 Washington Avenue; www.stlbg.com), plus live music and a host of food trucks. The festival includes two sampling sessions — from noon to 4 p.m. and 6 to 10 p.m. Saturday — and admission includes a small sampling glass so you can get down to the business of enjoying some of those 100-plus beers. Tickets are $37.50 to $60 per session, but designated drivers can get in for $5.


5. Laugh at a Neil Simon Play
Brighton Beach Memoirs is Neil Simon's semi-autobiographical comedy about coming of age during the Great Depression. Eugene Jerome is a baseball-obsessed Jewish kid who's starting to think more about girls than sports and is struggling to figure out where he'll go in life once he gets out from under his family. Although that might be "if" he gets out from underneath 'em — the Jeromes are a tight-knit bunch, and don't let go of family easily. Act Inc opens its season with the nostalgic Brighton Beach Memoirs at Lindenwood University's J. Scheidegger Center for the Arts (2300 West Clay Street; www.actincstl.com). Performances take place at 8 p.m. Friday, June 10; 2 p.m. Saturday and Sunday, June 11 and 12; 8 p.m. Saturday, June 25; and 2 p.m. Sunday, June 26. Tickets are $10 to $20.

Turn the page for more fun things to do, including Jane Lynch! 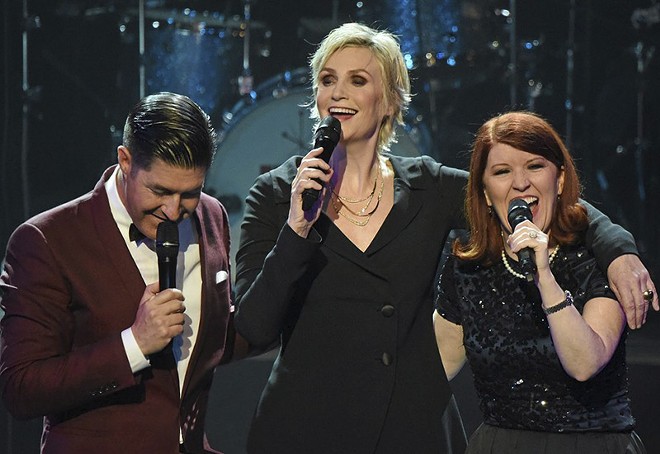 6. See a still-relevant classic at Wash. U
Jerome Lawrence and Robert Edwin Lee's drama Inherit the Wind is set up as a fictionalized retelling of the Scopes Monkey Trial, which saw teacher John T. Scopes convicted of teaching his class Darwin's theory of evolution in 1925. But the playwrights intended it to be viewed in a less-specific fashion, as a parable about intellectual freedom and its protected status under the Constitution. Clayton Community Theatre closes its current season with the court-room drama. Performances take place at 8 p.m. Friday and Saturday and 2 p.m. Sunday (June 10 to 26) at the Washington University South Campus Theatre (6501 Clayton Road; www.placeseveryone.org). Tickets are $15 to $20.


7. Meet us at the Muny
The Muny kicks off its 98th season with the family favorite Wizard of Oz. It's a comfortable, familiar start to a new year, but one that never fails to please. Who doesn't love plucky young girls with feisty dogs, a gang of goofy friends and flying monkeys in bell boy uniforms? The Wizard of Oz gets a ten-performance run (Monday, June 13, to Wednesday, June 22) at the Muny in Forest Park (314-361-1900 or www.muny.org). Tickets cost $14 to $90, and the show starts at 8:15 p.m.

8. See Jane Sing at the Sheldon
Jane Lynch, perhaps best known as Glee's Sue Sylvester, is currently touring the country with her cabaret show, See Jane Sing. Backed by a five-piece band and joined by Kate Flannery (the hard-drinking Meredith from The Office), Lynch engages in cabaret's typical storytelling and singing, but with a twist. In addition to the standards and the Great American Songbook, Lynch takes a chance on Nicki Minaj's "Anaconda" and throws in a medley of songs that made her cry as a child. It should be interesting. See Jane Sing takes place at 7:30 p.m. Tuesday at the Sheldon (3648 Washington Boulevard; www.thesheldon.org). Tickets are $55 to $65.


9. Catch Chuck Klosterman at the Improv Shop
Thanks to the intoxicating combination of humanity's tendency to overestimate itself and the Internet, the world is full of people pronouncing with certainty that they're right about almost everything. Pop-culture critic Chuck Klosterman dares to ask the unthinkable in his new book, But What If We're Wrong?: Thinking About the Present As If It Were the Past. In interviews with people such as David Byrne, Junot Diaz and Ryan Adams, Klosterman explores the implications of being wrong about the best musicians, the importance of sports in American culture and the golden age of television. He discusses and signs copies of But What If We're Wrong as the guest of Left Bank Books at 7 p.m. tonight at the Improv Shop (510 North Euclid Avenue). Admission is free but reservations are required; visit www.left-bank.com to sign up.