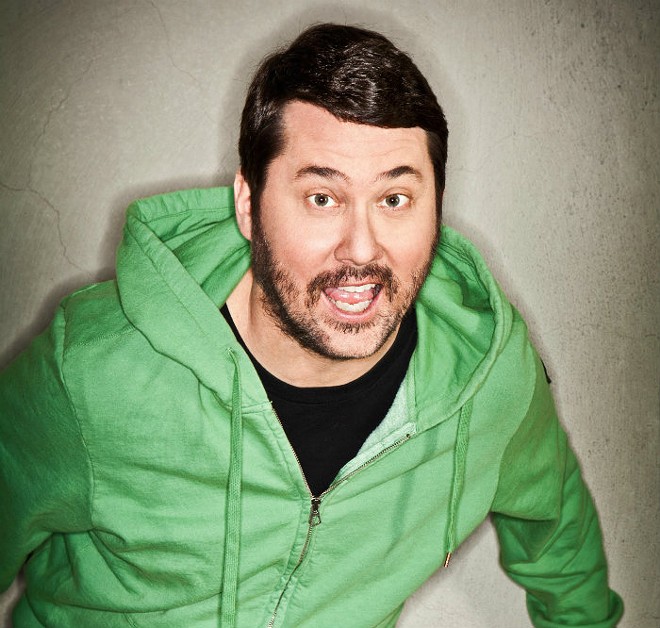 When Doug Benson plays Helium Comedy Club this week, he'll be splitting his performances up over two nights. Catch a live taping of his podcast Doug Loves Movies on Wednesday followed by a bare-knuckle standup show Thursday. The new format and venue will lend to a nice change of pace for Benson in St. Louis – he's more typically done double- or even tripler-headers. But it'll leave room to play tourist: “I'm excited to come to St Louis because I always have a good time – and I've never been to City Museum before and vow to check it out.”

We got in touch the San Diego-based comedian to see what he’s been up to (besides relentless podcasting) since his last pass through town. We've condensed our interview.

Riverfront Times: You’re still on track for an album a year since 2008. Is it getting any easier or more difficult?

Doug Benson: I'm off the track, actually. Got too busy this year with podcasts and other things, so I'm not sure when I'll get to the next album.

Do you fear bombing?

I don't mind bombing as much as I mind things getting ugly with a heckler. Most of the stuff people yell out at me has friendly intent behind it, but when someone is genuinely trying to mess with my timing and drunkenly continues to interrupt, that just makes me mad and takes the fun out of performing. Doesn't happen very often – knock on wood or whatever is available.

Do you listen to standup in your free time?

Very rarely. There's just too many good ones and I spend a lot of time in comedy clubs, so I'd rather listen to music or something else in my spare time.

Are you writing election jokes?

I tweet election jokes and talk about Trump a little bit in my act because he's a hard topic to avoid right now. But I try not to get too political because it's not really my specialty and people wanna escape from the news at a comedy show.

Was there a celebrity death you were particularly upset by?

John Belushi, John Lennon and Kurt Cobain were probably the most devastating deaths in my lifetime. I mean, of people I admired but didn't really know at all. Robin Williams was a tough one, because I had met him a couple of times and he could not have been nicer.

If you had the choice to go back in time, would you do it? And who would you want to get high with?

I'd do it just to get high with George Carlin. And maybe a young Barack Obama when he was doing that sort of thing.

Sativa for sure. Indica makes me sleepy. Or, I should say, sleepier.

What, if any, movie should definitely NOT get remade?

Even though I hate most remakes, I think that anything can be reimagined. It's just the people making these things don't always have the imagination to pull it off.

Do you have strong opinions towards mayonnaise?

Yeah, hate it, never use it, send things back when it's an ingredient. I'm a pretty picky eater and don't like most condiments. Don't get me started on mustard!

Are you for or against eating challenges?

I think they are disgusting. So I'm against them, I guess.