Where Is Baron Von Crypt?

As a kid growing up in Missouri, Timexx Seabaugh loved watching late-night horror films with his dad.

"The movies would scare the hell out of me, and always gave me nightmares," he recalls. "Yet I was fascinated by these friendly creeps who would come out in the commercial breaks and make me laugh. Oftentimes, Mom or Dad would send me to my room when the movies started, but call me back in for the host segments."


And it was in this way that Seabaugh first became acquainted with Baron Von Crypt, who hosted a late-night show on KDNL (Channel 30). It was called Baron Von Crypt's Shock Theater, and it featured a well-dressed vampire host with a series of catchphrases — "trust me," "blah" and "think about it," Seabaugh recalls — introducing horror flicks. Naturally, he had an assistant named Igor.

The show had its brief run from 1971 to 1972 (which, Seabaugh says, wasn't even all that short as these things go). And that might have been it, except that Seabaugh — now a musician, songwriter and entertainment promoter — started looking up some of old horror host heroes on YouTube.

At first he zeroed in on a different horror host, Misty Brew. She'd been on TV in Cape Girardeau from 1983 to 1989 as the host of Creature Feature, which Seabaugh remembered fondly. (He was born in Cape Girardeau, though his family moved frequently, and today co-owns a venue there called Pitter's Cafe and Lounge.) When Seabaugh asked around town, he found many of her former staff members — and then, ultimately, Brew herself.

"It was like when Ed Wood found out Bela Lugosi lived across town," he marvels. "She was very surprised to see that people still remembered her and Creature Feature." Did they ever: After Seabaugh convinced her to relaunch the show, personal appearances at haunted houses and comic conventions followed. That generated attention from the Horror Host Hall of Fame; Brew was inducted into its 2015 class. 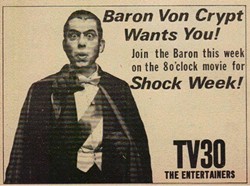 Now Seabaugh is turning his attention to Baron Von Crypt. Someone in St. Louis, surely, knows who he was — and where he is. Seabaugh hopes they'll hear of his interest and help him get in touch.

He's set up a Facebook page in hopes of getting the Baron's attention or at least clues from the public, as well as posters he hopes people will share online. So far, local media historians haven't been able to solve the mystery, and while the Baron has left plenty of traces online, he feels the best clues lie with the public.

Time is of the essence. Seabaugh would like to see Von Crypt inducted into next year's class at the Horror Host Hall of Fame. That means Seabaugh would need to find the Baron by fall.

He's sure it can be done.

"I think it is important that people know, appreciate, and understand, their unique place in American history," he writes in an email. "It would give me such joy to find Baron Von Crypt, and have him walk out and receive his induction in front of a room full of fans and fellow horror hosts, for him to have that day with his colleagues and fans. Let him sign some autographs, and know that his work has not been forgotten, because 45 years later, we are still watching and still talking about him and his show."

Do you hear that, Baron?