St. Louis artist Dmitri Jackson describes his comic, Blackwax Boulevard, as something like High Fidelity mixed with bits of Portlandia and Napoleon Dynamite.  The four-year-old comic follows a group of misfit clerks at the struggling Blackwax Record Store. The main character, Marsalis Parker, is a stuttering, 22-year-old recent college grad who works as a cashier at the store while he attempts to get a career writing about music off the ground.

“Initially, it was more gag-based — more humor-based. As time went on, I found myself developing and fleshing out the world more and finding out who these characters are a little bit better,” says Jackson. His comic has since explored issues of race, sexuality and gender. One of the larger themes is the gentrification of the neighborhood his characters live in, as well as gentrification of the creative process.

“When it comes to a lot of what the characters go through, and a lot of it is the characters battling this war to be relevant. They’re always trying to find a way to be seen as hip and cool and they’re afraid of being seen as antiquated and obsolete,” he says. "That’s kind of what the comic is speaking to, is that inner voice that’s saying they’re not cool or good enough, and that’s something that everyone goes through and everyone’s in that struggle together.”

With the comic, Jackson has fused his passion for drawing with his love of music. All the characters have a special relationship with music, but Jackson says the inclusion also speaks to our culture today and how we use pop culture to relate to one another.  “Pop culture in general kind of dictates the different impulses of our generation. We tend to speak not on our own terms, but in terms of music lyrics or movie dialogue or whatever we find on television.”

Jackson also draws from the sights and sounds of St. Louis for his inspiration. Taking a stroll along the Delmar Loop or going down to Cherokee Street gives him ideas for his characters. “I tend to imbue the comic with a lot of those vibes and the people that I meet. When it comes to defining the neighborhood that the comic is in, St. Louis definitely plays a part,” he says.

The comic has won numerous accolades, racking up five nominations for various awards. But Jackson acknowledges he's always been a bridesmaid, never the bride.

This year, Jackson has been nominated in the category “Best Comic Strip or Webcomic” at the Glyph Comics Awards, which take place May 20 during the East Coast Black Age of Comics Convention. The convention recognizes the best in comics made either by, for, or about black people.

But despite the lack of "success" he’s seen at the convention in years past, Jackson says the number of nominations he’s received is an award in and of itself — especially for a guy who is writing, drawing and publishing his entire comic himself.

“They always found something better, but I take pride in the number of noms I’ve racked up,” says Jackson. In previous years, he’s been up against major comic talents like Keith Knight of The K Chronicles, which shows he’s doing something right. “The cool thing is that I look at the list of nominees and I have a lot of really great company. It was really cool to have a group of people in the field of comics, who are professionals, think my work was just as good as Keith Knight’s work.”

Jackson publishes his comic once a week online on his Tumblr. But he sells print copies as well. You can find Blackwax Boulevard at Star Clipper, Vintage Vinyl and Euclid Records.

He says, “A lot of comic book readers still love the print copies where they can hold it in their hands and feel that connection with the comic book.” 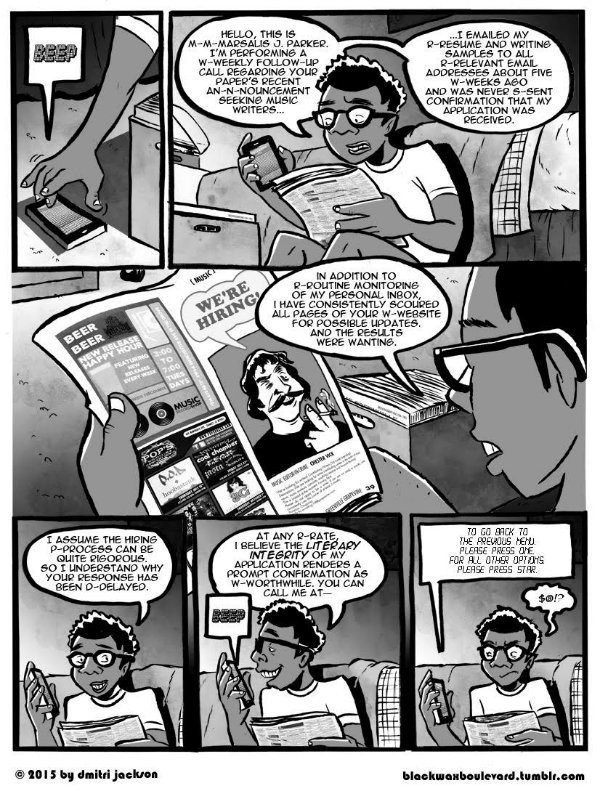