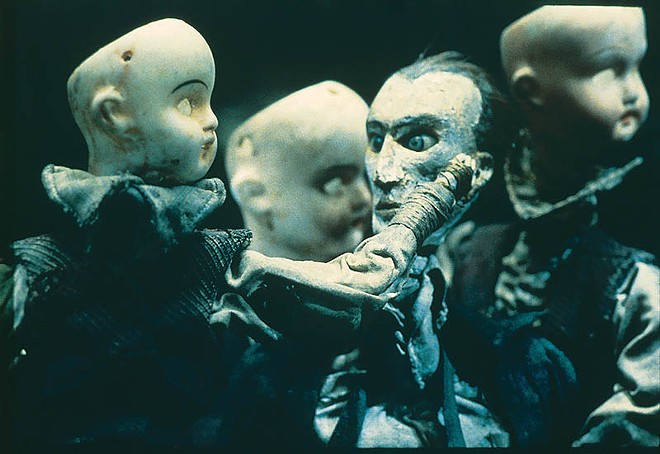 This week has it all going on. From Sunday's Earth Day Festival (which features some really cool bands, BTW), to cult cinema favorites at Webster U. and Shakespeare at Urban Chestnut (yes, really!), here are our picks for the week's top events.

Bonus: Not only are most of these events under $30, but in three cases, they're totally free.

See also: A late-breaking tribute to Prince in the Loop


1. See the Quay Brothers on the big screen
Stephen and Timothy Quay — better known as the Brothers Quay — create some of the most imaginative and unsettling films ever seen. Their stop-motion animated films are shot with looming shadows and unidentifiable sounds that enhance the otherworldliness of their partially-disassembled puppet actors. Director Christopher Nolan was so inspired by their work, he's curated a touring package of three of their films. The Quay Brothers in 35mm includes "In Absentia," "The Comb" and their brilliant "Street of Crocodiles," which is based on Bruno Schulz's short story of the same title. Nolan's own short film "Quay," which takes you into the brothers' studio, rounds out the program. The Quay Brothers in 35mm is screened at 7:30 p.m. Friday through Sunday (April 22 to 24) at Webster University's Moore Auditorium (470 East Lockwood Avenue; 314-968-7487 or www.webster.edu/film-series). Tickets are $4 to $6.

2. Catch an acclaimed Ozarks version of As You Like It
Slightly Askew Theatre Ensemble brings back its delightful adaptation of As You Like It for the Shake 38 Festival, and you should see it. This version of the comedy is set in the Ozarks during the 1929 farm buyouts. Rosalind disguises herself as a boy for safety and heads out to the forest with her friend, Celia. She meets the handsome Orlando, a displaced farmer, and feels an immediate attraction to him. Orlando feels something too, but is puzzled because he's not normally attracted to men. Don't worry, they work it out — and along the way Rosalind learns to love country life, with its handsome farmers and all-night dance parties, courtesy of local band the Foggy Memory Boys. This bucolic, bluegrass version of As You Like It is performed at 9 p.m. Friday at Urban Chestnut's Midtown location (3229 Washington Avenue; www.sfstl.com). Admission is free.

3. Applaud Shakespeare at the library
Soldiers feature prominently in Shakespeare's plays, from the histories (Macbeth) to the comedies (Benedick in Much Ado About Nothing). When the characters' respective wars ended, Shakespeare had the luxury of deciding whether to allow them to transition easily back into society or to have a rough go of adjusting to peacetime. For real-world soldiers, the re-entry to society is something that must be navigated alone. Stephan Wolfert's one-man show Cry Havoc blends the speeches of Shakespeare's soldiers with his personal experience to offer insight into the difficulties soldiers endure when they become civilians again. Cry Havoc is performed at 2 p.m. Saturday at the St. Louis Public Library's Central Branch (1301 Olive Street; www.sfstl.com) as part of the Shake 38 Festival. Admission is free, but reservations are requested as seating is limited.

4. Learn about a St. Louis music legend at Wash. U
Donny Hathaway had everything going for him. He left St. Louis' Carr Square housing project for Howard University and became tight with Roberta Flack, but abandoned school to work for Curtis Mayfield's Custom Records as an arranger, writer and producer. In four short years he released a massive single ("Where is the Love?" — a duet with Flack), a revered live album and co-wrote and sang the Christmas standard "This Christmas." At the peak of his professional career Hathaway began to suffer from crippling depression and paranoid delusions, which were eventually diagnosed as paranoid schizophrenia. Medication helped, but only when he took it regularly. Playwright Kelvin Rolston Jr.'s drama Twisted Melodies is a fictionalized journey into Hathaway's mind during the time he was trying to navigate his way through schizophrenia, the music industry and his home life. The Black Rep closes its season with Twisted Melodies. Performances take place at 7 p.m. Thursday, 8 p.m. Friday and Saturday and 3 p.m. Sunday (April 22 through May 1) at Washington University's Edison Theatre (6445 Forsyth Boulevard; www.theblackrep.org). Tickets are $30.

Turn the page for more things to do.

5. Attend a fashion show
The Washington University Fashion Show is the only final exam we know that can draw a paying crowd (no offense, mathletes). The 87th installment of the show takes place at 7 p.m. at the Missouri History Museum (Lindell Boulevard and DeBaliviere Avenue) and features work from more than twenty sophomore, junior and senior designers. In addition to the ready-to-wear designs that will be tomorrow's wardrobe workhorses, models will wear conceptual and sculptural garments that incorporate wood, silicon and digital fabrication in their construction. Additionally, students in the pattern-making program present dresses inspired by the Missouri History Museum's current exhibition, Little Black Dress: From Mourning to Night. Tickets are $25 to $100, and are available by phone (314-935-6543) or online (www.edison.wustl.edu).

6. Celebrate the earth (for free!) in Forest Park
As an earthling, it's up to you to celebrate your planet at the St. Louis Earth Day Festival. This year's celebration takes place from 10 a.m. to 6 p.m. today on the Muny grounds in Forest Park (www.stlouisearthday.org), which will be accessible by foot, bicycle and biodiesel shuttle buses. Entertainment options include all-day yoga sessions, an environmental education center, a farmers market and two stages of live entertainment. Restaurants and food trucks that have been certified by the Green Dining Alliance will handle the concessions, which are served on recyclable and compostable materials to comply with the festival's zero waste initiative. You can do your part by bringing a refillable water bottle and reusable bag to cut down on waste. It's a nice planet we got here; be a shame if something bad happened to it. Admission to the St. Louis Earth Day Festival is free.

7. Get a lesson in gay history at the Hi-Pointe Backlot
Director Robert L. Camina delves into a dark and almost forgotten corner of gay history with his documentary Upstairs Inferno. In 1973, the New Orleans gay bar Upstairs Lounge was firebombed during Pride Weekend. Thirty-two people were murdered in the attack, which the New Orleans media and city leaders ignored. Some of the victims remained unidentified because their families did not want the shame of being linked to a gay person; their burials were paid for by anonymous donors. The police never charged anyone in the attack. Camina's film uses interviews with survivors and eyewitnesses to recount the night of the attack and its aftermath. Upstairs Inferno screens at 9 p.m. tonight at the Hi-Pointe Backlot (1002 Hi-Pointe Place; www.cinemastlouis.org/qfest) as part of Qfest, Cinema St. Louis' LGBTQ film festival. Tickets are $12.

8. Thrill to The Sound of Music at the Fabulous Fox
Rodgers & Hammerstein's The Sound of Music has something for everyone: a love story between adults, a family outwitting the Nazis and a song that teaches you how to remember the musical notes. Is it any wonder that its popularity has only grown since its 1957 debut? A new production of The Sound of Music, directed by Jack O'Brien, is currently touring America. The show is presented at 7:30 p.m. Tuesday through Friday, 2 and 7:30 p.m. Saturday and 1 p.m. Sunday (April 26 to May 1) at the Fox Theatre (527 North Grand Boulevard; 314-534-1111 or www.fabulousfox.com). Tickets are $30 to $100.

9. Catch another documentary with LGBTQ themes
LGBTQ people face discrimination from outside their community and from within, as shown in Nneka Onuorah's documentary The Same Difference. Onuorah takes viewers inside the world of black lesbians and bisexuals, which is stratified along gender roles. Black lesbians who identify as studs discriminate against those who wear make-up, and vice versa, while black bisexuals are marginalized by both groups. The Same Difference features frank discussions on the hypocrisy of the animus felt by members of all three groups, as well as insights from queer celebrities Felicia "Snoop" Pearson and Lea DeLaria. The documentary screens at 5 p.m. tonight at the Hi-Pointe Backlot (1002 Hi-Pointe Place; www.cinemastlouis.org/qfest) as part of Cinema St. Louis' Qfest. Tickets are $12.

See also: A late-breaking tribute to Prince in the Loop