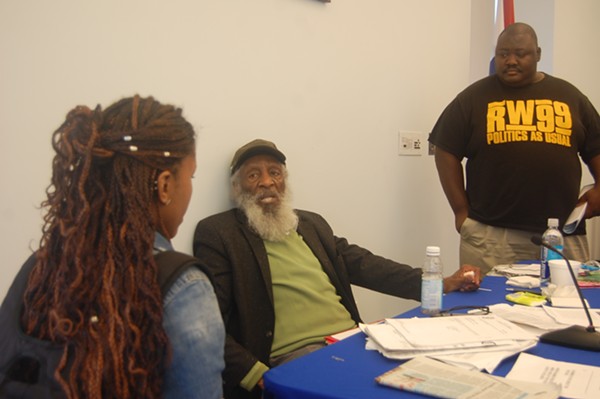 Dick Gregory is no Bill Cosby hater. He thinks the rape allegations against the entertainer are part of a media onslaught targeting Cosby's legacy, stemming from a failed attempt by Cosby and his fellow investors to purchase the broadcasting company NBC in the late '90s.

But even with that, he understands why younger generations don't support the entertainer. Cosby’s holier-than-thou persona did him no favors, Gregory told a group of students at St. Louis Community College last week. “The difference between me and him (Cosby) is I know I'm not shit!"

The 83-year-old St. Louis native, comedian and civil rights activist visited the school's William J. Harrison Education Center on April 4, giving a four-hour lecture, which included a Q&A that dealt with everything from racism to the abduction of more than 11 million black males worldwide.

He even touched on Donald Trump.

“He will sit there and call a woman ugly and say he never said it,” Gregory marveled. Of Trump and also-ran Carly Fiorina, he quipped, “My advice to Donald Trump and her is that they both should marry each other and see what kind of ugly baby they have.”

Gregory was here for a lecture series sponsored by the college's African- American Male Initiative, an organization created to solve the needs of African-American male students on the Florissant Valley and Forest Park campuses. Black males have been statistically shown to complete college at a lower rates than their peers – just 33.1 percent nationally, according to the U.S. Department of Education.

Gregory himself is an alumni of Sumner High School, which is named after former abolitionist Senator Charles H. Sumner. It was the first high school opened for African Americans west of the Mississippi. Gregory was class president and a track star, which gained him a scholarship to Southern Illinois University Carbondale. (He's since had a track named after him at Sumner.)

And that wasn't his only run for office. In 1968, he ran for U.S. President as a write-in.“I got tired of having to choose between the lesser of two evils,” he explains. “I wanted to do something about what was going on and not just talk about it. If you watch someone do an evil thing and just watch, and you do not do anything about it, then you are just as guilty as the person that did it.”

As a civil right leader in the 1960s, Gregory was friends with both Malcolm X and Martin Luther King. Asked his perspective of the two leaders, he told students, “King was the nicest guy on the planet… He never had a fight in his life. He took on the mightiest country that’s ever been created on earth without a gun.”

Of Malcolm X, Gregory recalls canceling a speaking engagement the day of his assassination: “I told him I’m not going to let the government get two for the price of one.”

He adds, “I was the first black who was ever permitted to work a white nightclub, and that was because of Hugh Hefner. Before that, you could dance, sing and play an instrument, but if you were black, you could not stand on stage and talk. That would show how smart you were.”