These 12 Bars Provide Shuttle Service to Busch Stadium — for Free 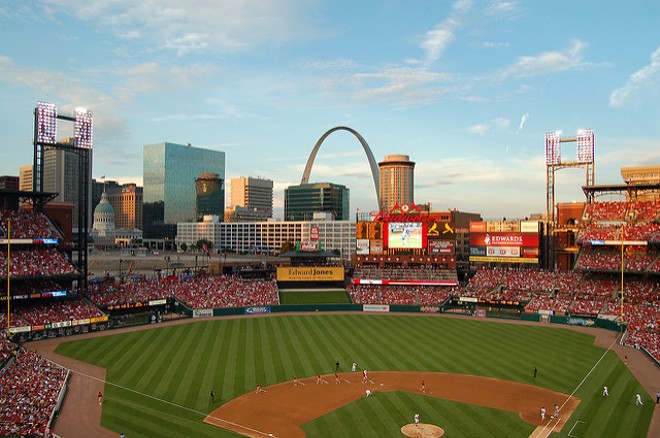 It's that time of year again — the time when red is your signature color, your game day schedule is non-negotiable and #cardinalsfangram is your favorite hashtag. That's right — baseball season is here!

But while we love our redbirds with an undying St. Louis passion, nobody is a fan of the nightmare parking or the jam-packed MetroLink crowds that come with a trip to Busch Stadium. You can skip the game day struggle, however, by getting your food and drinks at one of these great St. Louis bars — and then taking a complimentary shuttle to and from the game.

Here are twelve bars whose transportation services could save your sanity — and your wallet. No need to thank us.

Note: some shuttles may adjust their schedules for Opening Day or other special events.

1. Llywelyn's Pub
This St. Louis favorite has a trolley (yes, a trolley) at its Soulard location (1732 9th Street) that starts picking customers up an hour before game. The trolley begins return trips around the seventh inning. Is that fancy or what?

2. Great Grizzly Bear
With more than a dozen appetizers in addition to flavorful Cajun specialties, Soulard's Great Grizzly Bear (1027 Geyer Avenue) is a great place to pregame or celebrate a win. The shuttle begins one hour before the game and completes its trips one hour after the game, or until everyone is picked up.

3. Big Daddy's Soulard
No one knows how to party quite like the crowd at Big Daddy's (1000 Sidney Street). The shuttle drives patrons to the stadium starting one hour before the game and ending around the second inning. Return trips go until about 45 minutes after the game.

4. Johnny's Restaurant & Bar
Known for "beautiful wait staff and terrific food," Johnny's (1017 Russell Boulevard) provides a free shuttle that picks fans up about every 15 minutes throughout the entire game. The shuttle begins its rounds one hour before the game and keeps going until one hour afterward.

5. Joanie's
Get your pre-game pizza at Joanie's (2101 Menard Street), where you can hop on the shuttle as early as 90 minutes before game time. The driver makes trips for as long as people want to go down to the stadium. Return trips begin in the 7th inning and continue until no one is standing at the designated drop off/pick up location — unless you intend to stay downtown for hours thereafter, of course.

6. Social House
If body paint is your thing, start your game day with a trip to Social House  (1551 S. 7th Street) — the original Soulard location. Shuttle services to Busch start between 60 and 80 minutes before the game, with the same rule after the game ends.

7. Southtown Pub
This south-city staple boasts not one, but two, shuttles to transport Cards fans to and from games. Join the neighborly merriment at Southtown Pub (3707 S. Kingshighway) while grabbing some grub, then hop on the shuttle up to 45 minutes before game time. Return trips continue until everyone is picked up.

8. Hammerstone's
Start your fun with some drinks and live music at Hammerstone's (2028 S. 9th Street). You can then ride the shuttle starting one hour before the game. While the shuttle doesn't run back and forth during the game, it returns to the stadium for pickups around the seventh inning and continues until everyone has made it back safe and sound.

9. Trueman's
Volleyball leagues aren't the only highlight at Trueman's (1818 Sidney Street) — the Benton Park bar also has a shuttle for game-day convenience. The route starts an hour before the game and continues until the third inning. It typically returns for pickups during the seventh inning — but if you're in that awkward fourth-through-sixth-inning gap, they'll gladly drive you over to the stadium anyway. Good folks.

10.1860's Saloon Fill up on burgers, pizzas and catfish po' boys, and sneak in a game of pool before the game at 1860's (1860 S. 9th Street). The shuttle runs an hour before and after the game, and it makes trips throughout the entire nine innings.

11. Molly's
A great nightlife haunt, Molly's (816 Geyer Ave.) provides a shuttle for customers starting 45 minutes before the game. You can get a ride to Busch until the third inning and then make your way back to Molly's as early as the seventh inning. Molly's also has a new menu — another reason to pay a visit.

12. Casino Queen
So you live in the Metro East? Don't worry, we haven't forgotten you. Grab a bite at SEVENS at the Casino Queen (200 S. Front Street, East St. Louis), where you can get a ride up to 90 minutes before the game. While the shuttle doesn't run during the game, it does make trips back and forth for 45 minutes afterward.

Know of a shuttle not on the list? Let us know in the comments section!