Consuming Kinetics Explores "Support" in Its New Show at the Kranzberg 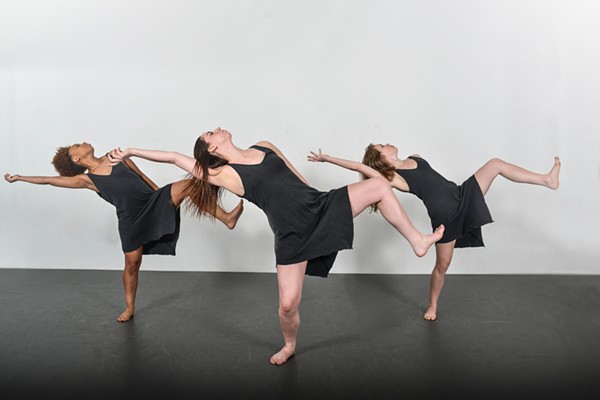 Let's make one thing clear right away: you're not going to see anything weird at Consuming Kinetics Dance Company's spring concert.

"We don’t do strobes or anything," says the company's executive and artistic director, Arica Brown, laughing. "What you’ll see is a really incredibly intimate viewing of something very personal."

Brown, who grew up in St. Charles, founded Consuming Kinetics Dance Company in 2009. Now in its seventh year, the contemporary dance company will present its spring dance concert, Footholds and Foundations, at the Kranzberg Black Box this weekend. Featuring six pieces, each by a different resident or guest choreographer, the show explores the theme of support in all of its forms.

"Some people took support from a very human experience, like if you’re down and you need the support of an individual to help lift you up," Brown explains. Another choreographer thought of support in the sense of filling a personal void during hard times.

In the piece she personally choreographed, Brown took a very different approach.

"...My piece is actually quite non-human," she says. "My piece is just an impression of support, like in an architectural, physical, tangible standpoint." Think: using geometric shapes in movement, or even the back wall of the stage like a partner in the dance.

The company has a residency at the Kranzberg, which allows for an intimate relationship with the space. While the theater usually maxes out at 100 seats, Brown says that the company has cut that number back to 80 so the dancers can use even more of the space for this performance.

The result is a very different experience from what you may find in a larger theater.

"It’s almost like you’re inside of [the dancers'] space, and you’re pulled inside of their world," Brown says. "Not all dances, especially dances with very large numbers, are meant to be viewed that way, but we really cater our work to this intimate space. We keep it in mind the whole time we’re creating, and you could come two different nights and sit in two different seats and have a completely unique experience." 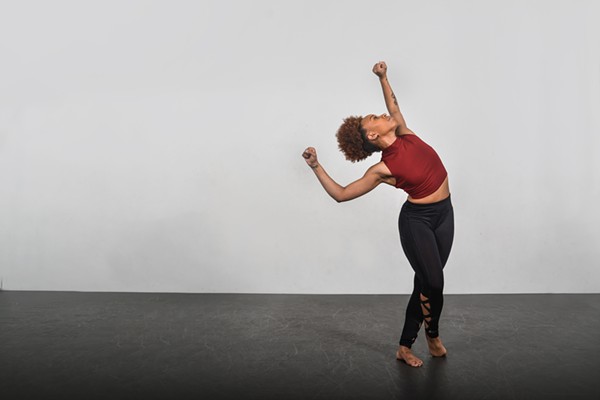 That willingness to go past the usual boundaries is just one way Consuming Kinetics is different than other local dance companies. Another is its founder's background. When she first started at the University of Missouri-St. Louis, Brown was studying English composition. She ended up in a dance class without any previous dance experience.

"I took the first dance class that UMSL ever offered. And I didn’t know that it was even a dance class. From what I read, I thought it was a lecture course, and it was going to fulfill some sort of fine arts or performing arts credit that I had to get," Brown says. "So I show up the first day and the teacher is talking about leotard and tights, and I’m like, “I should probably drop this class because I have no dance experience."

But while it wasn't love at first pirouette, Brown continued taking classes.

"...I took the next class that they offered the following semester, which was a contemporary modern class, and I was like, 'Wow, I like this a lot better than this ballet stuff.' And then the third semester I took a [dance] composition course, and that’s when I changed my major."

Brown's passion for dance composition drove her to that work after her 2009 graduation. She and the group she rounded up began entering different events around the city, such as National Dance Week — and Consuming Kinetics Dance Company was born.

For the first two years, Brown worked in IT during the day and tended to her fledgling company in the evening. But along the way, she decided she wanted to become a full-time artist — and more and more dancers she met wanted that as well. So she quit her day job. She began being more selective at auditions. She opened a dance school in conjunction with the company to bring in more revenue and opportunities for her dancers, and she applied for a 501(c)(3) so the company could become a nonprofit organization.

Today, the company has both adult and youth dance education programs — another unusual element. While Brown has found it to be common practice for a dance company to offer classes to the public in the West, it isn't as common in the Midwest.

"So we sort of have a niche there in the city. I think it’s something that people are looking for," Brown says.

The company moved into its own studio in the Central West End last summer — and Brown aspires to add space in the future in order to offer even more classes to the students who love them.

Brown hopes those students are inspired by seeing their teachers perform at Footholds and Foundations this weekend — and she hopes that audience members like you will walk away inspired as well.

"I hope our viewers and our artist friends just take away a thought of support and what that means in their life, and how it can be in different facets," she says. "You can find support in things that are tangible and also in human interaction."

You can see Footholds and Foundations at the Kranzberg Black Box Friday, April 8 at 8 p.m., Saturday, April 9 at 8 p.m. and Sunday, April 10 at 5 p.m. For tickets, visit ckdc.org.