For Carondelet's Seventh Mural on Broadway, Clark Terry Was a Clear Pick 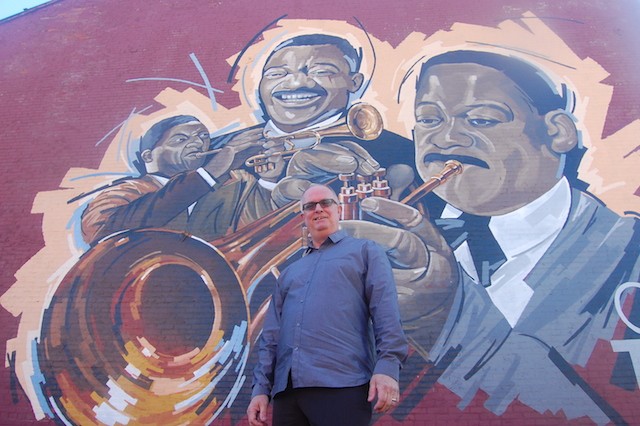 Last fall, when the Carondelet Community Betterment Federation sought an artist to paint the seventh in a series of ten murals being commissioned on Broadway, it received more than 300 applicants.

But the focus was clear even before the group chose an artist. Both of the two finalists proposed murals featuring the same jazz legend: Clark Terry.

Terry, a world-renowned trumpeter, flugelhornist, writer, composer, writer and instrument designer, was a St. Louis native and a graduate of Vashon High. Born in 1920, he died last year at age 94.

Artist Ray Harvey was ultimately chosen by the community group to do the honors. He said the choice was clear: “He grew up in the Carondelet area and was said to be the greatest jazz trumpeters ever. I was just fortunate to get the position to paint.”

On Saturday, even as the National Blues Museum opened its doors for the first time, the Carondelet group unveiled Harvey’s mural. 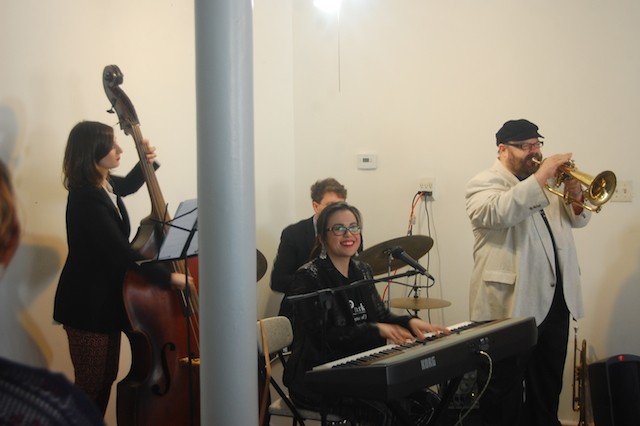 The ceremony included a performance by Clark Terry’s protégé, St. Louis-raised trumpeter Stephen Fulton, along with his band (Ben Zweig on drums, Adi Meyerson on bass and Champian Fulton on electric piano and vocals).

Fulton began his friendship with Terry when he shared dinner with him and his band after a performance in the 1970s. Fulton, who had been part of the award-winning University of Oklahoma band, was so awed by Terry’s performance that he dropped out of college to pursue his love for jazz.

At first, in those pre-Google days, he had to seek out Terry’s phone and address information. After obtaining it, he began to call and travel to see Terry so much that they became friends. The two became so close, Terry invited Fulton to New York City to live with him for a few weeks. “It was kind of strange how we got together, but we ended up becoming best friends,” Fulton said.

Fulton is just one of many musicians who Terry influenced and mentored. Other include music legends Quincy Jones, Wynton Marsalis, and East St. Louis’ own Miles Davis.

Terry’s career spanned 70 years and included him performing for eight U.S. presidents. In 1960, Terry broke the color barrier by accepting an offer from NBC to become its first African American staff musician. He played on The Tonight Show for twelve years as part of a spotlighted member of the Tonight Show band.

Artist Harvey has completed more than 400 projects for clients, such as Chase Park Plaza Hotel and Merrill-Lynch, to name a few. Harvey has also completed projects as far as China, and throughout the Midwest and the Eastern part of the U.S.