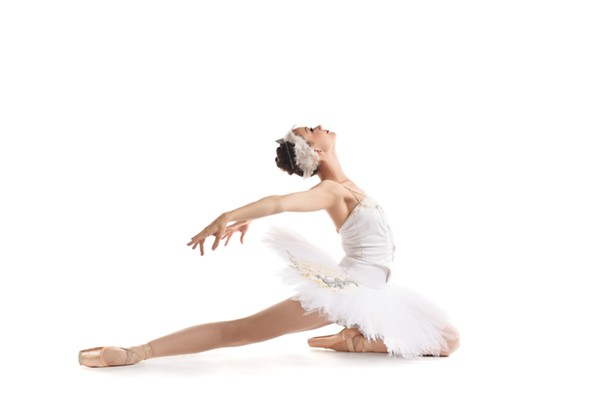 Hear the name Swan Lake, and what comes to mind?

For many people (at least those outside the ballet world), their first instinct may be the movie Black Swan. It's true: Black Swan catapulted Swan Lake to big-screen fame in 2010. But that's not the only reason Saint Louis Ballet Artistic Director Gen Horiuchi thinks this classical ballet is so popular — nor is it the sole reason the company is bringing Swan Lake back to the Touhill Performing Arts Center this weekend after its last run in 2010.

"I think it’s the music, number one. The melody is so dramatic and emotional, and no doubt one of the best scores that Tchaikovsky had written. And so I think that’s part of the reason. And another one that I can think of is the movement of the choreography," Horiuchi says, describing how the dancers' ballet technique goes well with the movement to embody a swan.

Horiuchi decided to revive Swan Lake for Saint Louis Ballet "because it's a great ballet of our time" — but if you saw the 2010 performance, don't assume this year's production will simply be a repeat.

“I always update choreography and also adjust the flow of the show,” Horiuchi says. He explains that he makes notes at the end of shows so he can incorporate changes in future revivals. Dancers are often different by the time that happens, so he also makes changes for the current company.

This year's production of Swan Lake will close Saint Louis Ballet's 2015 - 2016 season. And while Swan Lake is a hit with today's audiences, it has literally been wowing crowds for more than a century. The first performance was by the Bolshoi Ballet in 1877 — and while there is traditional movement that always accompanies Swan Lake, this production uses original choreography by Horiuchi in all other respects.

"I think that’s why you have to make it your own: It’s been done so many times," Horiuchi says. He explains that the original performance in the nineteenth century was actually a disaster. Although the music was well composed, the choreography did not go well with it — and so other people kept reviving the ballet over and over.

"It’s a history of this ballet being redone. Even today, we should continue to update the steps, the choreography, just to make it better."

This will be the fourth time Saint Louis Ballet brings Swan Lake to St. Louis audiences. Horiuchi himself came to Saint Louis Ballet in 2000, after being brought in as a guest artist in 1997. Formerly a principal dancer with the New York City Ballet, Horiuchi doesn't mince words when describing the challenges of running a ballet company in a smaller city.

However, Horiuchi says he is proud of where the company is now.

"We have 24 wonderful professional dancers who make a living here in St. Louis throughout the year. We put on five productions a year. And we work together every day in the studio."

He adds, "This is not a goal, we still want to continue to growing, but right now also to support what we do, we have over 350 students. We’re not any different from any other regional ballet companies like Kansas City Ballet, or, you know, Milwaukee Ballet."

So as Saint Louis Ballet heads to the stage this weekend, your job is simple: Horiuchi says he just wants you to enjoy the beautiful music, as well as the beautiful dancers' movements.

"Hopefully, you just enjoy the ballet as an art form, just like any other opera or symphony."