5 Things to Do This Weekend That Don't Involve Easter Eggs 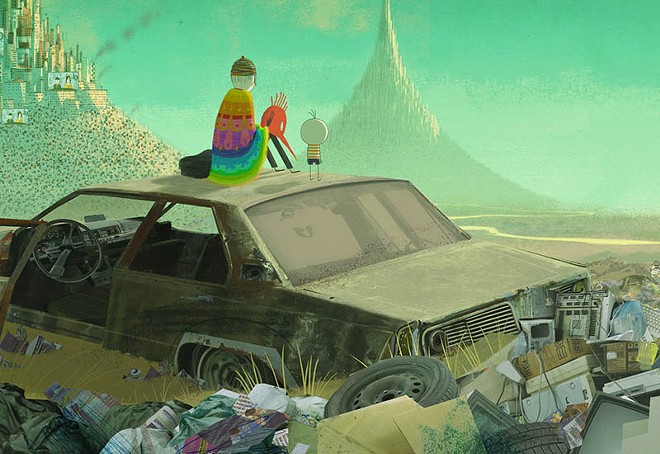 Yes, it's Easter, but even in this Catholic town there's lots to do all weekend long. You'll have your pick of concerts, films or museum exhibits while your more dutiful peers queue up for the stations of the cross or hang out with family. Interested in art openings? We've got this weekend's picks for that, too.

1. Check out the Octarrarium at RAC
Kevin Harris and Chad Eivins created the Octarrarium as an interactive performance space. The installation, currently on display at the Regional Arts Commission (6128 Delmar Boulevard; www.racstl.org), utilizes eight projectors of live-streaming video to respond to movement and sound within its confines. The full capabilities of the Octarrarium will be put to the test tonight when Harris and Alex Cunningham perform improvised music (on violin and electronics, respectively) at 7 and 8 p.m. inside its dimension. Both performances are free, courtesy of HEARding Cats Collective and the arts commission.

2. See a spring dance concert
The Slaughter Project explores the space between alienation and togetherness in its spring dance concert, Caravan. The title piece is inspired by the culture of the nomad, which depends on close family bonds to provide a shared culture and societal center even as the group exists outside the mainstream world. The other eight dances are built around the idea of the shared experiences that define a group. Caravan is performed at 8 p.m. Friday and Saturday (March 25 and 26) at Washington University's Edison Theatre (6445 Forsyth Boulevard; 314-935-6543 or www.edison.wustl.edu). Admission is $15.

3. Enjoy a foreign film
Few filmmakers can shed their adult mindset long enough to depict accurately the way the world appears to a child, but Alê Abreu has no such problems. The Brazilian director's animated film Boy and the World (O Menino e o Mundo) captures both the wonder and the fear that children experience in the world of adults. Young Cuca lives happily with his parents in the Brazilian countryside, but only until his father reluctantly heads to the city to find work. Cuca follows him and discovers a realm of monstrous machinery and noisy cityscapes filled with people that stretch out forever. But there is also music — much of it new and exciting — which accompanies him on his search. Boy and the World is a multi-colored fantasia about family, adventure and hope. The film screens at 7:30 p.m. Friday through Sunday (March 25 to 27) at Webster University's Moore Auditorium (470 East Lockwood Avenue; 314-968-7487 or www.webster.edu/film-series). Tickets are $4 to $6.

4. See the art of drones
Chicago-born artist Andréa Stanislav draws inspiration from the history of the American Midwest, particularly those junctions where the natural world and civilization meet. For her new exhibition at the Saint Louis Art Museum, Andréa Stanislav: Convergence Infinité, she created a four-channel video installation using camera drones. Each of the drones started from a fixed point marking one of the cardinal directions and then completed a choreographed dance along its journey before ending at the Apotheosis of St. Louis (the statue that watches over Art Hill). The cameras filmed culturally significant sites such as the Cahokia Mounds and the Mississippi, as well as more transitory elements of the region, such as bald eagles and river bluffs. The four films are shown together to reveal the seams where city and country come together. Also on display are Stanislav's mirrored sculptures and taxidermied animal installations, which contrast the artificial and the natural in puzzling ways. Andréa Stanislav: Convergence Infinité is on display in galleries 250 and 301 at the Saint Louis Art Museum in Forest Park (314-721-0072 or www.slam.org). The work remains up through Sunday, June 19, and the museum is open Tuesday through Sunday. Admission is free.


5. Check out some birdbrains at UMSL's Mercantile Library
Among those of the ornithological persuasion, the St. Louis region is of prime interest because of our natural flyways. The Mississippi River underwrites that status; it's a superhighway for migrating birds. We have another feathered fact to boast about: While the renowned birdman John James Audubon was still alive, the St. Louis Mercantile Library acquired a rare reserved copy of his masterwork, Birds of America, from his family. This is tantamount to owning a Gutenberg Bible. Celebrate it with the exhibit Audubon and Beyond: Collecting Five Centuries of Natural History at the St. Louis Mercantile Library on the University of Missouri-St. Louis campus (1 University Drive at Natural Bridge Road; 314-516-7240 or www.umsl.edu/mercantile). The extensive exhibit incorporates sections relating to not only birds but also reptiles, mammals, fish, insects, humans, astronomy, geology, meteorology and more. Audubon and Beyond is open 7:30 a.m. to 10:30 p.m. Monday through Thursday, 7:30 a.m. to 5 p.m. Friday, 8 a.m. to 4 p.m. Saturday and noon to 8 p.m. Sunday (November 9 through June 2017). Admission is free.