It was there that Bogard conceived the idea for her newest novel, The Middle Step, which tells a story about race, class, and family in north St. Louis. She decided, “I want to write the stories of some of the students I was working with.” Many of these students were black and living below the poverty line, with turbulent home lives.


Charmaine Washington, Bogard’s student at a different high school a decade ago, remembers Bogard as an attentive teacher who fostered a love of language and helped students with their writing both inside the classroom and out.


Bogard herself followed advice as she wrote — and rewrote — The Middle Step for nine years before signing a contract for publication in 2014.


Her research for the book was unorthodox: much of it came from her students’ creative writing journals, where they shared details of their lives that, Bogard says, “a math teacher might not get a chance to find out.” Her students all knew she was working on a book, and soon her advanced novel-writing class became an active participant in its creation.


Bogard would sit down with these students after class and talk. “They’d give me words,” she says. “I’d ask them, ‘OK, so what would a girl call a guy who I would’ve called a 'deadbeat' back in my day?’ And, ‘Oh, you’d call him a hobo.’ And what would you call a guy that was your boyfriend?’ ‘Oh, he’d be your boo.’” Since the book took more than a decade to reach print, Bogard worries that the slang might be a little out of date. But it’s still true to the worlds of her students.


It's not just language that feels true; Bogard wanted to tell a larger story as well. The book’s central character is a middle-upper class Jewish woman, Lisa Harris, who becomes the residential mom in a north St. Louis foster home run by a local school — much like the local Jennings School District’s Hope House — after her marriage falls apart. There, she meets Danesha, Coreen, Brianna and Eva-Lynn, young girls of whom Lisa at first thinks, patronizingly, that she might save from their home lives.

It’s not so easy. Not everyone is saved, and the girls end up teaching Lisa just as much as she teaches them. 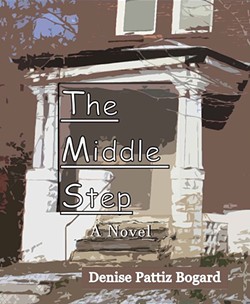 The head of the academy’s English department told Bogard she recognized several students in the main characters. But Bogard didn’t intend to base her main characters off any specific student. “They are all a composite, and yet they’re fictionalized," she says.


That doesn’t mean they’re not, in some sense, real. Bogard's experience working in St. Louis schools has given her a familiarity with a world that many white St. Louisians never see.

“It was very very important to me that the setting was in an impoverished area and that the girl’s stories were true in terms of the spirit of the truth to what many many kids in St. Louis at poverty level experience on a daily basis,” Bogard says. “I’ve had students who, in a week, they sleep in six different places — with aunties, in a homeless shelter. They’ve lost their place, and mom’s out doing the best she can, but she farms the kids out to Grandma or to Auntie, and they’re sleeping on the couch or on the floor.”


Washington, Bogard's former student, testifies that the book captures real life. “To me it seemed like, my gosh, I was wondering if she had spent some years living in the inner city in a similar home,” Washington says. “That’s how true it rang to me. I definitely think it can open people’s eyes to underprivileged situations and urban living.”


Bogard hopes to do just that; she wants these stories to “provide a lens for white privilege St. Louis” to understand the rest of the city. Mostly, it’s about making people realize that there’s a second St. Louis they might not have seen, and experiences that “most of us don’t ever have to think about."


Still, she knows her limitations. “Mainly, I’m a writer. I am not a sociologist, I’m not heading up a social justice program. I’m an author who created from her imagination and her experiences a cast of characters who lived in my head for almost a decade.”


In fact, she inked her book contract briefly before Michael Brown was shot and St. Louis found itself in the national spotlight for its racial and educational inequities. For Bogard, that caused a bit of a pause. Before the Black Lives Matter movement, the book seemed less fraught.


But Washington thinks, if anything, Bogard's story has something to contribute to that national conversation. “I saw a lot of St. Louis in it when I read it, but I’ve lived in Chicago, Chapel Hill, North Carolina, Cincinnati, Ohio, Columbus, Ohio, now Houston, and I think it’s really applicable to any major city across the U.S.,” she says.


Bogard is a little hesitant. If the national conversation about race was ten years ago what it is today, she says,  “I’m not sure if I would have the same sense of audacity to write this book."


Still, she hopes that her book “can be a catalyst for some of those conversations” that came from Michael Brown’s death. Even more, she wants to offer the book to literacy programs nationally and school programs locally, to help that composite of kids she wrote about.

Ultimately, her hopes are less grand and more personal. She says, “If this book can in any way contribute to literacy or sensitivity to racial issues, gosh, that would be amazing to me.”